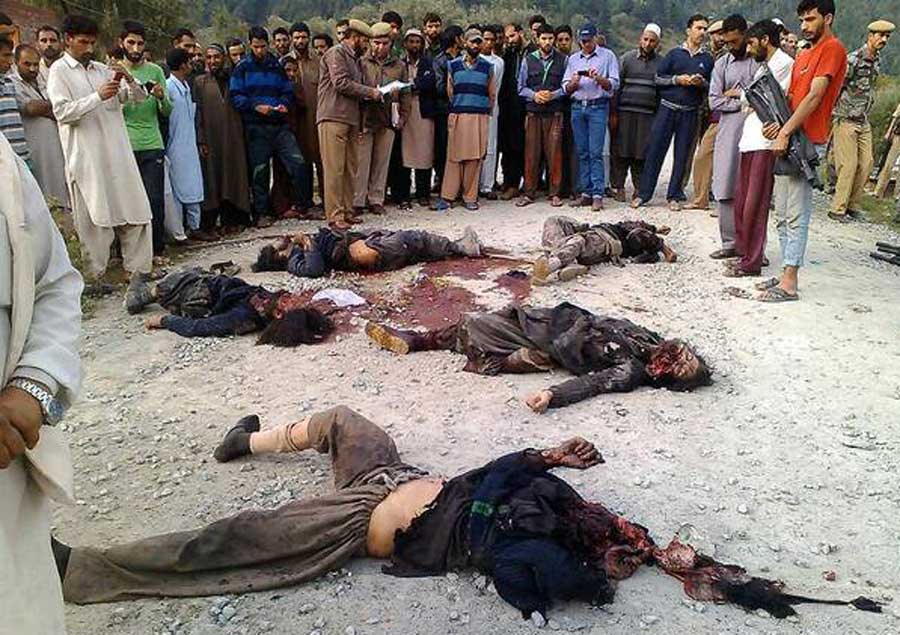 A pall of fear and gloom has enveloped the Kashmir Valley due to the spate of killings of local terrorists under mysterious circumstances. The blame is, invariably, being placed on the security forces but the facts, as they are emerging, point towards the killing being an offshoot of a violent gang war that has erupted between the Hizbul Mujahedeen (HM) and its splinter group the Lashkar-e-Islam (LeI).

The security forces have not claimed to have killed the terrorist. They have no reason to not acknowledge killing of terrorists.  All indications point directly towards the gang war.

The uncertainty is eating into the people since it is their kith and kin who are being killed. The people are now desperate since the very organisations that were responsible for taking their sons on to the misconceived path of terrorism have now become their killers. The hapless boys who were, in any case, facing grave danger from the security forces are now being targeted from within also. Due to this twin threat there is palpable fear that the boys are now marked for elimination more so than ever before.

The bullet-ridden body of a Kashmir youth, Fayaz Ahmed Bhat, has been retrieved in the Tangmarg area of North Kashmir on Saturday, 19, September. Syed Sallahuddin the Pakistan based Chief of Hizbul Mujahedeen (HM) has not wasted a moment in acknowledging that the terrorist belongs to his cadre and has been killed by the security forces. The security forces have, however, not claimed to have killed the terrorist.

The security forces have no reason to not acknowledge killing of terrorists. Here is every reason to believe that there is more to the incidents then meets the eye. All indications point directly towards the gang war.

On Friday, 18 September, a former terrorist, Bashir Ahmed Bhat and his three-year-old son were shot by unidentified terrorist at their residence in Sopore, Kashmir. Bhat had been a part of the Jamait-ul- Mujahedeen, a splinter group of the HM. He had quit militancy after serving a prison. He died on the spot while his son died in hospital.

It was also inferred strongly that the killing was done by the HM in order to teach a lesson to the LeI.

Such is the level of the prevailing uncertainty that even the police is unsure about the identity of the assailants. They cannot say for sure whether the attack was carried out by the HM or the LeI.

It may be recalled that in the beginning of September, a few weeks from now, bullet ridden bodies of three terrorists were discovered under similar conditions at Pattan. At that time also the HM claimed the dead persons as its cadre and the killing was attributed to the security forces.

Quite mysteriously, the separatist protests took some time to get going. Later, it so emerged, that the terrorist were a part of the breakaway group of LeI, whose existence the HM is refusing to acknowledge. It was also inferred strongly that the killing was done by the HM in order to teach a lesson to the LeI.

The situation among the locals at that stage took a very unusual turn. The people, even after getting to know that the killing was a handiwork of the HM did not stop protesting. They did not say it out loudly due to  fear of their lives, but by continuing to protest, they collectively implied the fear and frustration that the internecine gang war between the two factions is causing to them and in which the blood of Kashmiri youth is being spilled.

There is fear that even innocents and family members may be targeted as the gang war attains higher levels of violence.

The obvious reason behind the unusual turn of events is the break away from HM of Abdul Qayoom Najar, Sallahudin’s oldest and most trusted commander in Kashmir. Najar was expelled from the HM for “the murdering of innocent persons; indulgence in character assassination of Hurriyat leaders (Geelani) and attacks on the telecommunication set-up in the Valley.”

The fact of the matter is that Najar had, for long, aspired to be the top commander on ground, a position that is invariably held by a terrorist of Pakistani origin. He also demanded more money, weapons and most importantly ammunition to run his operations which the United Jihad Council (UJC) was unable to provide. It is also being said that he had sent to the UJC a list of separatist leader who, he felt, had sold out the cause and recommended their elimination. Since his demands went unheeded he broke away and created his own establishment with a minimum of twenty terrorists, all from the HM.

Sallahuddin, who is already on a shaky wicket due to depleted strength in the valley and not much coming as aid within Pakistan, is now desperate. He knows that he has to eliminate the challenge being posed by Najar but he cannot do so without inviting the ire of the Kashmiri people for getting the locals killed. By putting the blame on the security forces he is trying to spread a veil of misinformation while going about his evil designs.

Najar is an experienced commander who has survived this long due to his intelligence and tenacity. He will not allow Sallahuddin to ride roughshod over him. By killing Fayaz Ahmed Bhat, he has sent a message that the Lei I continues to be a potent force that will retaliated with all the force and brutality in its power.

The local populace is now reeling under the uncertainty that the situation is unfolding. There is fear that even innocents and family members may be targeted as the gang war attains higher levels of violence.

The Government of Jammu and Kashmir has to take firm action to assuage the fears of the people. It has to expose to the people the self centered attitude of the terrorist leadership as is evident from the manner in which it is using the junior cadre as cannon fodder to maintain their own dominant positions and ambition. The security threshold needs to be enhanced to ensure that innocents are not harmed by this wicked business. More than anything else it is time to initiate a strong campaign to ensure no more youth are drawn on to this evil and self destructive path of terrorism.

One thought on “Kashmir reeling under a terrorist initiated gang war”