Home  >  News  > Homeland Security  >  Kashmir: Lessons from the Rise and Fall of a Decorated Cop

Kashmir: Lessons from the Rise and Fall of a Decorated Cop 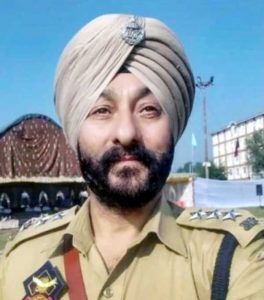 For the J&K Police, which till now was being lauded for its resolute anti-militancy operations despite being targeted by terrorists, Dy SP Davinder Singh being caught red-handed while ‘escorting’ two high-profile Hizbul Mujahideen (HM) terrorists out of the Kashmir Valley has come as big shock and embarrassment. Singh deserves no mercy for his shameful act as he has betrayed the trust reposed in him both by the police force as well as the public and that’s why the decision of the authorities to treat him as a terrorist is appropriate and quite reassuring.

But while J&K Police deserves credit for having a robust counterintelligence mechanism in place that facilitated Singh’s apprehension, there are many who believe that the police has a lot to explain for the delay in being able to ‘home-on’ to this traitor and there are reasons for this. There is no doubt that Singh has had a very shady past that saw him being accused of various illegal acts ranging from illegal sale of confiscated narcotics to the carjacking a timber laden truck and selling the wood it was carrying.

In 2004, Parliament attack convict Afzal Guru wrote a letter to his lawyer in which he made a startling disclosure naming Singh as being the one who had directed him to take a non-Kashmiri speaking person named Mohammad to New Delhi and arrange lodging for him there. Incidentally, this man turned out to be one of the assailants who was subsequently shot dead by security forces during the Parliament attack. However, since Dy SP Singh was never booked for any of his misdemeanours, it’s but natural for one to suspect departmental inefficiency, organisational complicity or even a conspiracy in this case.

Now that Singh has been caught with the smoking gun,it’s very easy to cast all sort of aspersions, but to do so without understanding the ruthless nuances of militancy related maneuverings would lead to missing the wood for trees. The intention here is neither to defend the government or J&K Police, but only to expose how some Kashmiris are playing with the lives of their own people just for their selfish interests so that the people of Kashmir realise how they’re being fooled by both the separatists and terrorists alike.

Anyone with even a casual knowledge of the happenings in Kashmir will know that there are many people here who sympathise with armed groups and surreptitiously work for them but ensure that they remain within the ambit of law. Known as ‘over-ground workers’ (OGWs), such people take a high moral ground by proclaiming that they are supporting the terrorists for ideological reasons but everyone knows that they do so only because it gets them easy money and power. They are the ones who keep a close eye on the government and security forces and take to the streets as well as keep petitioning various rights organisation and groups whenever they commit a mistake.

But then, there are exceptions!

The separatists and OGWs identify pliable individuals serving in the establishment and by giving them an image ‘makeover’ to appear as epitomes of professional integrity. For example, whereas the All Party Hurriyat Conference (APHC) is very prompt and vocal in bringing out even the smallest and unintentional lapses of J&K Police, but when Singh sold narcotics seized from a smuggler, there was no outcry on this double crime (one, the illegal act itself and two, selling drugs that ended up in the hands Kashmiri youth). Similarly, not a word of resentment was forthcoming when this police officer disposed timber belonging to someone else and pocketed the money.

Most importantly, the APHC didn’t even bother to call for an investigation into Guru’s allegations of Dy SP Singh having coerced him into assisting a terrorist who later took part in the Parliament attack. Though legal experts contend that even if his allegation was proven right, it would have made no difference in the death sentence awarded to Guru, but atleast a campaign led by APHC to show public solidarity would have atleast provided him some much-needed psychological solace.

But the APHC’s inexplicable silence on Guru’s complaint was not an oversight, it was intentional; the pro-Pakistan camp, which was painstakingly building Singh’s ‘tough cop’ image chose to turn a blind eye to his misdeeds and that’s why Guru was abandoned when alive and remembered only after he was executed! In fact, a US cable released by Wikileaks in 2011 mentions how a “moderate Hurriyat leader” had told the US political office “that his faction of political separatists was remaining as quiet as possible about the issue because they do not feel strongly that India should pardon Afzal.” So, isn’t it likely that Guru ended up becoming a ‘sacrificial lamb’ just to boost Dy SP Singh’s image?

It’s not yet clear as to how did he avoid coming under the scanner even after Guru made serious charges against him. Probably they believed his version (as shared with journalist Parvaiz Bukhari in 2006) that “I am being victimised for having worked in SOG, for being very nationalistic. What am I getting in return? Bad name and a conspirator.” His counter claim was that he was being framed as Guru “wants clemency and he wants to gain sympathy of Kashmiri public and government of India by giving this story.” The AHPC’s intentional silence on Guru’s accusation apparently paid rich dividends as it seems to have fooled the police and intelligence agencies into accepting Singh’s version.

Few local policemen in J&K can afford to openly admit to torturing terrorists and their sympathisers; still fewer can boast that “nobody would ever forget having been interrogated by me.” But Dy SP Singh was an exception, who in his 2006 interview, boastfully told Bukhari, “I had a reputation for torture, interrogation and breaking suspects. If anybody came out of my interrogation clean, nobody would ever touch him again. He would be considered clean for good by the whole department.” Such was the awe-inspiring gumption of this man- till he was himself caught red-handed while attempting to smuggle two high profile Hizbul Mujahideen (HM) cadres out of Kashmir Valley.

In short, thanks to the APHC’s and OGWs’ silence, Singh became a hero of sorts!

Besides using Kashmiris as ‘sacrificial lambs’ another associated harsh reality is that in Kashmir it’s not ideology but money that’s propelling militancy and one has to only look around to see how true this claim is. Take for example the quantum upgrade of the houses belonging to certain separatist leaders and humungous increase in their personal assets ever since militancy erupted here. Why go far- in the Singh case itself, there are reports of him owning atleast three residential properties, including a sprawling mansion which is under construction and his daughter undertaking a MBBS course in Bangladesh.

Everyone knows that with the pay of a Dy SP rank officer,it is absolutely impossible to acquire multiple properties as well as for meeting expenditure on foreign education of children. In addition, there is a mention of him being paid Rs 12 lacs by terrorists to ensure their safe passage out of Kashmir Valley. APHC should tell the common Kashmiri as to where did this money come from? As far as one knows, the terrorists in Kashmir aren’t indulging in extortion and nor are they or their sympathisers undertaking any fund-raising drives. The APHC also denies receiving any funds from any sources, both internal or external. So, it’s obvious that this money has come from somewhere else and it’s not very hard to identify the source!

So, as long as muscle power, manipulation and money dominate militancy in Kashmir, it’s only an illusion of victory that is being force-fed to the masses by APHC. The real result is that while a select few are getting richer, it’s the young boys indoctrinated by them to pick up arms who are dying for a struggle that has dubious credentials!

One thought on “Kashmir: Lessons from the Rise and Fall of a Decorated Cop”