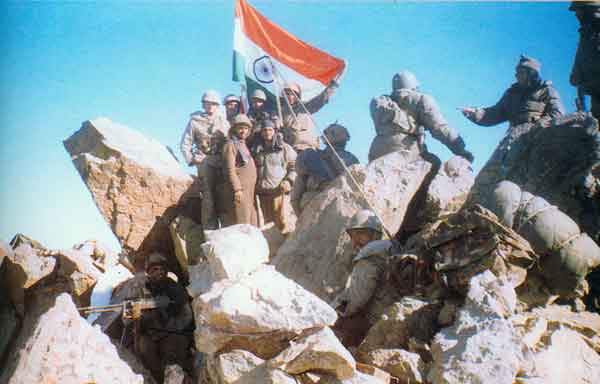 Sixteen years have elapsed since the fateful day, 26 July 1999, when India emerged victorious in the Kargil war. The ignominious designs of a belligerent neighbour (Pakistan) to violate the territorial integrity of the nation were thwarted by a military action that has no parallel in the annals of military history.

On the sixteenth anniversary of the war, it would be appropriate to revisit the treachery, duplicity and deceit that went into the planning and execution of the war by Pakistan.

On this day, the brave soldiers of the Indian Army, fighting against insurmountable odds, successfully restored a situation that had the potential of escalating into a nuclear holocaust.

The situation was contained by orchestrating a mature and restrained response that won international acclaim and gave India, not only a military victory, but also a moral ascendancy over Pakistan.

On 3, May, 1999, two shepherds reported to the army an unusual movement of people with a soldierly bearing in the Batalik Sector. Further investigations exposed blatant intrusions amounting to a full-fledged breach of the Line of Control (LOC) by Pakistani forces in the trans-Himalayan sector.

A war, not of its choosing, was once again thrust upon India. The war that lasted for almost three months was a battle of epic proportions fought at extreme high altitude. It culminated with Pakistan lamely announcing the withdrawal of its battered Northern Light Infantry (NLI) formations when there was very little left to withdraw.

On the sixteenth anniversary of the war, it would be appropriate to revisit the treachery, duplicity and deceit that went into the planning and execution of the war by Pakistan.

Even as India was being feted with an olive branch with the promise of a negotiated peace, Pakistani troops were already on their way to stealthily occupy Indian territories. Pakistan went into the war with a fair realisation of the risks and gamble involved. An eminent Pakistani writer, Altaf Gauhar, has suggested that contingency planning for the Kargil conflict was formulated way back in 1987. The plan, however, was set aside as militarily untenable and irrational as also internationally indefensible.

An eminent Pakistani writer, Altaf Gauhar, has suggested that contingency planning for the Kargil conflict was formulated way back in 1987.

Why then did Pakistan decide to take this gamble after twelve long years? The reason was the then Chief of the Pakistan Army, General Pervez Musharraf! He had been part of the initial planning and had all through considered the plan to be operationally tenable.

The Pakistan Army, under the leadership of General Musharraf, factored in a normal winter, a weak and vacillating Indian reaction, a strong element of surprise, and most likely a strong international intervention for fear of a possible nuclear escalation. All tenuous probabilities not based on rational analysis.

Having decided to launch the operation, the Pakistani leadership sent in troops of the Northern Light Infantry (NLI) for the same. The NLI comprises exclusively of troops from Gilgit-Baltistan and Pakistan Occupied Kashmir. Being from a backward and underdeveloped area, their education levels are low. They are hardy, innocent and well disciplined troops who exude a great sense of loyalty. However, they are looked down upon by their Punjabi counterparts and are given a status of low grade soldiers. It is these troops that the Pakistani military hierarchy decided to sacrifice at the altar of its unsustainable ambition. They were, in other words, cannon fodder.

A captured diary of a Captain serving with one of the NLI units, tells a chilling story. He was in the vanguard of the operation launched in February when winter was at its peak. Only trained mountaineers, specially clothed, equipped and rationed could have risked a passage in the treacherous terrain. The Captains untrained and ill equipped column lost eleven men in the approach march itself. The remainder suffered terrible physical torture.

Even after denigrating their loyal troops in such a dastardly manner, Pakistan declined to receive the bodies of its regular soldiers from the Indian side. The country took eleven years to acknowledge that it lost soldiers in the conflict.

The terrain was so inhospitable that the intruders would not have been able to survive without comprehensive and sustained re-supply operations. Those who reached their objective found themselves without support and assistance. These poor soldiers were not aware that, right from the word go, the operation was undertaken with woefully inadequate planning for logistic support, a situation that is considered to be suicidal in military terms.

The Indian response was swift, courageous and spirited. The tactical advantage of the enemy sitting on high ground did not deter the resolve of the Indian soldiers to throw him out of Indian soil. No sooner was the battle joined, the intruders realised the harsh reality of the treachery of their own leaders.

The result for this hapless body of troops was an ignominious death under conditions of great deprivation and humiliation. Even after denigrating their loyal troops in such a dastardly manner, Pakistan declined to receive the bodies of its regular soldiers from the Indian side. The country took eleven years to acknowledge that it lost soldiers in the conflict. In November, 2010, it listed on its official website, the names of 453 soldiers and officers as killed in the operation. The actual figure, according to informed sources, was well over 2000.

The then Prime Minister, Nawaz Sharif, has gone public to acknowledge complete lack of information about the operation; Benazir Bhutto openly condemned the same.

The emerging realities provide enough evidence about the psyche of those involved in the Kargil misadventure with Pervez Musharraf at their helm. The plan can, without doubt, be perceived as the product of a highly masochist, egoistic and diabolic mindset at the highest level of military leadership in the Pakistan hierarchy.

Pakistan’s flawed policies have caused divisiveness and unrest within the country. Most of its Provinces, especially Balochistan and Waziristan, are reeling under full-fledged insurgency that the Pakistan Army is unable to control. The internal security situation is attaining alarming proportions. Yet, Pakistan continues to harbour terrorists and perpetrate violence in the subcontinent.

One is reminded of the famous saying “what you sow, so shall you reap”. It is time for Pakistan to understand that it cannot get away with such duplicity and if this situation carries on, the country will disintegrate under the weight of its own internal contradictions.