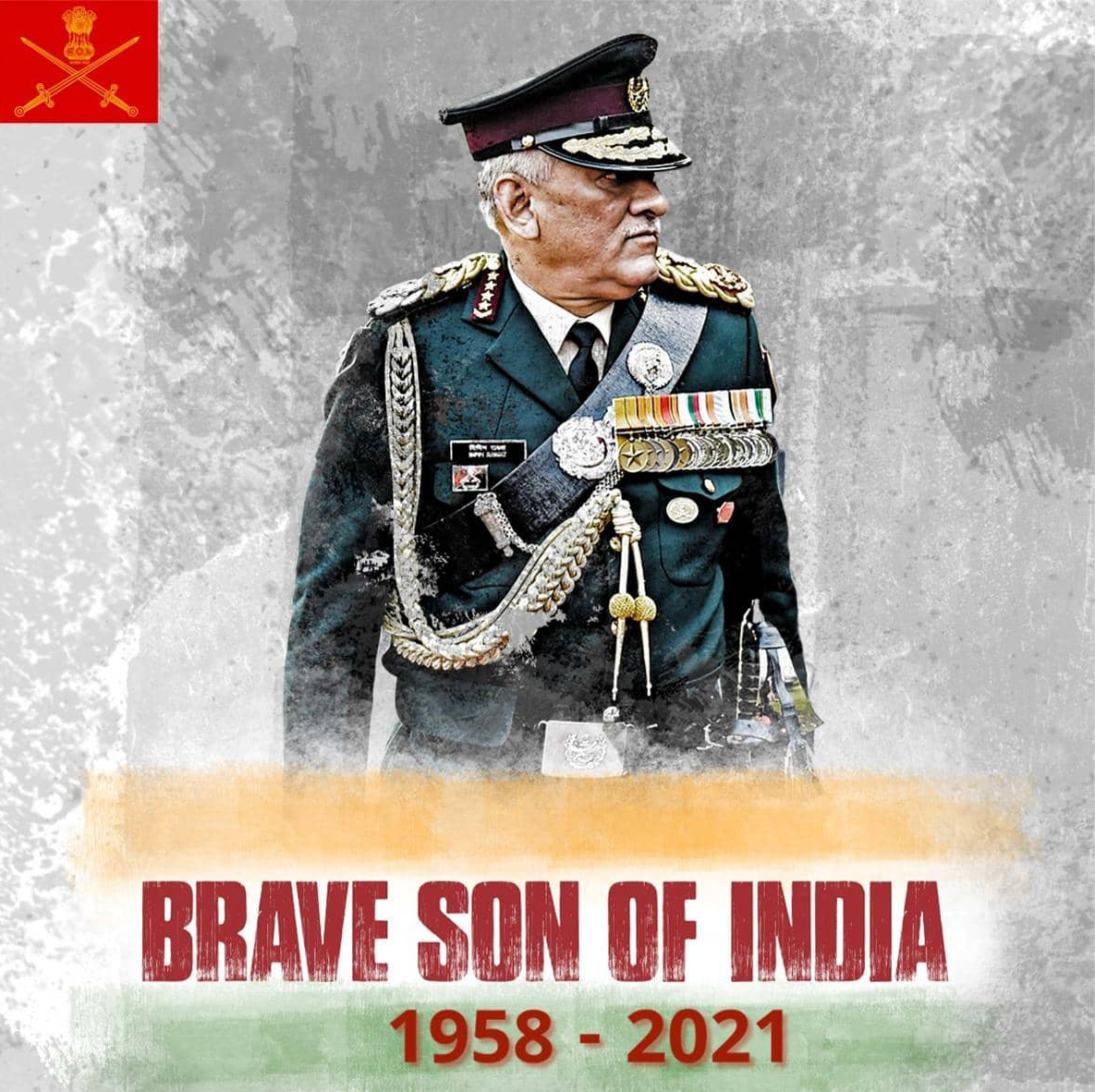 On 8 December, at 12:20 hrs a MI 17 V5  Helicopter carrying General Bipin Rawat, first Chief of Defence Staff (CDS) of the Indian Army, crashed in District Coonoor, Tamil Nadu, about 20 kms from Wellington and burst into flames. He was going to Defence Services Staff College (DSSC) Wellington to deliver a lecture.

Accompanying the General was his wife, Mrs Madhulika Rawat, Officers and OR of his personal staff and security , a liaison officer from Defence Services Staff College (DSSC) and the Air Force pilots and crew of the Helicopter. Of the 14 persons, only Group Captain Varun Singh, the liaison officer from DSSC Wellington, survived. He continues to fight for his life under the best possible medical care in Military Hospital Banglore.

The entire Nation has since remained distressed by the terrible news. Respects for the General and others who lost their lives were paid by Prime Minister Narendra Modi, many Indian and foreign dignitaries and the Nation as a whole. Volumes have been written about the General , his commitment to the service and to the Nation, his vision, his affectionate nature and all other aspects of his personal and professional life.

In this article, his relation with the Union Territory of Jammu and Kashmir (especially Kashmir) is being narrated. It is of significance since he was directly involved in three big events that have shaped the destiny of the region in recent times.

He was Vice Chief of the Indian Army when the Surgical Strike was carried out by the Indian Army against various terrorists camps of Pakistan in September, 2016; the plan would have been formulated under his guidance. He was Army Chief when the Balakot strike took place in February 2019. He was Army Chief when the Government took the dynamic decision of bifurcating the State of Jammu and Kashmir into two Union Territories and abrogation of Article 370 and Article 35A of the Constitution; such a decision could not have been taken without a positive recommendation from the Army.

General Rawat has a long association with Jammu and Kashmir. He commanded a Rifle Company in Uri Sector in Kashmir, followed by Command of 5 Sector, Rashtriya Rifles at Sopore, Kashmir, a hot bed of militancy. He was General Officer Commanding, 19 Infantry Division  deployed on the Line of Control in Baramulla, Kashmir. It was this intimate knowledge of the trouble torn region that helped him formulate his security strategy to deal with the changing situation in the Valley.

General Rawat based his “Kashmir strategy” on principles of righteousness and justice and never hesitated from calling a spade a spade. In 2017. He caused a lot of ripples with his two statements, “This is a proxy war. Proxy war is a dirty war….. You fight a dirty war with innovations,” he said in his first significant remark. “Adversaries must be afraid of you and at the same time your people must be afraid of you. We are a friendly army, but when we are called to restore law and order, people have to be afraid of us,” he added.

He then went ahead and awarded a commendation card to Major Leetul Gogoi who came under considerable fire for having placed an Over Ground Worker (OGW) on the bonnet of his jeep to save troops stuck in a crowd that had belligerent intentions. This was the “innovation” that the courageous General rewarded. There was tremendous criticism but the General gave out a loud and clear message that his troops will always be protected, the morale of the troops hit the sky after that.

General Rawat paid a lot of attention to the crucial requirement of weaning away the local youth from the cult  of terrorism. In January, 2018, he said, “In schools (Jammu and Kashmir) there can be seen two maps, one of India and another of Jammu and Kashmir. Why do we need a separate map for the state? What does it teach the children?” he said. By so saying he flagged the need to check radicalisation of the youth through the medium of education. The statement again elicited a sharp negative reaction from the separatist forces but, once again, it sent out a clear unambiguous message.

In April 2018, he made another very strong statement on the same subject. “There are some youths in Kashmir who have strayed and have been radicalised. They think they can achieve their goal through guns. But the time is not far when even they will be convinced that neither the forces nor the militants will be able to achieve their goal,” he said. General Rawat said so in order to strengthen his appeal to the youth to shun the path of violence. His effort and strategy has paid good dividends and the recruitment of youth in the fold of terrorism has witnessed a sharp decline in recent years.

In October 2018, an Indian Army soldier was killed in an incident of stone pelting and in this context General Rawat reiterated his demand that stone-pelters be termed as Over Ground Workers (OGW’s). “I again say that stone pelters should be treated like OGWs. The deceased (soldier who died due to stone pelting) was just guarding the convoy of soldiers who were given the task of building roads and bridges……,” he said, once again standing by for the safety, security and honour of his troops.

In the domain of soft power the General always spoke of the benefits being accrued from the Army’s civilian welfare initiative, Operation Sadbhavana, and the high aspiration levels of the Kashmir youth which need to be leveraged. In the last year or so he was quite convinced that people are understanding that terrorism is not the best way forward and a different approach is required to break the cycle of violence. He spoke of this voraciously.

Notwithstanding the appeal for peace, the General left no doubt about the Army pursuing its mandated task of purging the region of terrorism in order to ensure that peace comes to the valley. “If we slow down operations who will guarantee that our convoys and installations will not be attacked,” he queried from the media quite often.

He always sent strong messages to Pakistan advising the country to cease its misadventures in Kashmir for its own good and hinting to escalation of the conflict if the need arose. On the issue of ceasefire violations, he maintained that the same were designed to facilitate infiltration and also to extricate the terrorists during failed infiltration attempts. Pakistan remained quite scared of his words and intentions.

General Bipin Rawat always stood by his troops and give them the necessary confidence to accomplish the task fearlessly. He garnered the complete support of the Government that gave a free hand to the security forces led by the Indian army. Beyond operations, he always motivated the people of Kashmir to shun violence and pursue a life of peace and prosperity. His perfect mix of hard and soft power created a positive environment in the region that has seen peace becoming a reality during the years when he was at the helm. Adieu General Rawat, the people of Kashmir will always look upon you as a friend and a well wisher.