The so-called ‘Jasmine Revolution’ in the Middle East, which has impacted the popular perception of the Western World, particularly amongst the uninformed, seems to have hit a roadblock in Bahrain. Ironically, in India too, the revolution has caught the imagination of some people, who tend to see international events in black and white.

The sincerity of the West, particularly the US, with regard to the ‘Jasmine Revolution’ is on test in Bahrain and by extension to Saudi Arabia.

Saudi Arabia and UAE have deployed 1000 and 500 personnel respectively to Bahrain under the banner of Gulf Cooperation Council. Interestingly, the UAE has committed to deploy 12 aircraft in support of the NATO to patrol the No Fly Zone over Libya. This has been done because of the strategic importance of the Gulf Region and also because the region falls in Shia-Sunni fault line. The vital strategic interests of the US are at stake in the region. If the US and its allies in the region cannot calibrate the developments, there will be far reaching political consequences in the region and impact on the global oil prices.

However miniscule the smaller Gulf countries may be, the destabilisation of any one of them can flare up into a crisis of international dimensions, given the criticality of the Persian Gulf for global energy security.

It is therefore imperative that the dynamics of the region as such with particular reference to Bahrain and the Gulf Cooperation Council (GCC) is put in perspective.

This 665 sq km island nation, located centrally with respect to the Arab part of the Gulf region is an ideal location for force projection in terms of air and naval power. Its strategic location in the Persian Gulf is such that it commands the sea-lanes of communication through which the region’s sea-borne petroleum exports must transit. It is for this reason that the US has maintained a strong naval presence in the country since 1949. Military bases provided by Bahrain were crucial for the conduct of the Gulf Wars by the US led coalition, both in 1991 and 2003.

On the other hand, Bahrain’s small size and large neighbours also engender a strategic vulnerability. Sunni rulers have traditionally ruled this Shia majority country. Ironically, oil reserves, discovery of which in 1932, vested Bahrain with its importance, are now past their prime, forcing Bahrain to diversify its economy in other areas like international banking and petroleum refining.

Apart from oil, processing of aluminium and provision of dry dock facilities for ships are Bahrain’s important industries. More than one-third of the island’s urban population consists of foreigners.

Amongst the regional maritime powers in the Persian Gulf, Bahrain has historically felt most threatened by Iran, which was the main reason that prompted it to join the Gulf Cooperation Council (GCC). This threat perception is not without reason. The recent deployment of GCC troops has been vehemently opposed by Iran.

Iran revived the claim to Bahrain primarily on the grounds that the majority of Bahrainis were Shia Muslims.

Iran has often laid claim to Bahrain, based on its 17th century defeat of the Portuguese and its subsequent occupation of the Bahrain archipelago. The Arab clan of Al Khalifa, which has been the ruling family of Bahrain since the 18th century, in turn pushed out the Iranians in 1780. The late Shah Mohammad Reza Pahlavi, raised the Bahrain question when the British withdrew from areas east of Suez, but he dropped his demand after a 1970 UN-sponsored plebiscite showed that the Bahrainis overwhelmingly preferred independence to Iranian hegemony.

The religious leaders of the Iranian Revolution revived the claim to Bahrain primarily on the grounds that the majority of Bahrainis were Shia Muslims. Iranian leaders subsequently renounced the claim in an attempt to establish better relations with Bahrain.

US military cooperation with Bahrain began in 1940, consequent to a US-British agreement, whereby it was permitted to avail naval facilities at Al Jufayr, a port section of the capital Manama. Immediately after Bahrain’s independence in 1971, the US leased port and docking facilities from the Bahrain Government for the US Middle East Force. The agreement disconcerted the other Gulf States who perceived it as another form of colonialism.

Moreover, given close US-Israel ties, the US was viewed with a great deal of suspicion and hostility. In 1977, Bahrain terminated the lease and the headquarters of the US Middle East Force was compelled to move aboard one of the three ships that constituted the force. However, the US naval personnel were still permitted to use Bahraini port facilities for logistic needs of the naval fleet.

During the Iran-Iraq War, when Bahrain’s oil industry and tankers were endangered, large barges were used as bases for the US attack helicopters, radars and air defence weapons. During ‘Operation Desert Shield’ in 1990, the newly constructed Sheikh Isa air base was inundated with military aircraft. There were close to 200 US aircraft (F-4Gs, F-18s, AV-8Bs, A-6Es, EA-6Bs, KC-10s) and approximately 12,000 personnel deployed at the base. In the Gulf War, Bahraini troops formed part of 3,000 strong Peninsula Shield Force of the GCC. Bahrain also served as a major coalition air and naval base.

During the War, Iraq targeted Bahrain with three scud missiles, of which only one impacted on the country. Bahrain, however, did not suffer any combat casualty in the War. 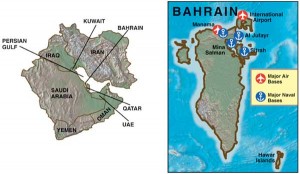 On 22 October 1991, Bahrain signed an agreement, expanding the US military presence in Bahrain. The agreement facilitated the pre-positioning of US military equipment in Bahrain, and the US consequently had several warehouses of equipment and supplies at Sheik Isa Air Base.

The close defence cooperation of these countries with the US was comprehensive as it included training, regular military exercises, pre-positioning of US defence assets in countries like Oman, Qatar and Kuwait, and provision of air defence cover.

Since 1991, UAS and Bahrain have regularly been holding joint exercises in the latter’s land, territorial waters and airspace. Bahrain’s Sheik Isa air base was also extensively utilised by the US aircraft in carrying out ‘Operation Southern Watch’ for enforcing a no-fly-zone in Iraq. Again, in the opening stages of ‘Operation Iraqi Freedom’, Manama (Jufayr) and Sheik Isa in Bahrain served as important naval and air base respectively for the US led coalition forces. The naval base at Manama hosted the Headquarter of the US 5th fleet / USMC Pacific Headquarter.

The Shia Factor in Bahrain

The Constitution of Bahrain designates the Amir, the Supreme Commander of the Armed Forces. Traditionally, the members of Al Khalifa have held the most prominent military posts. As in other Gulf states, the ruling family exercises strong control on the national security apparatus. In the ‘70s and ‘80s the professional bias of the Bahraini Defence Force was towards internal security as the Islamic Revolutionary regime in Iran sought to exacerbate Shia-Sunni fissures.