Japan-Russia dilemma over the territorial dispute 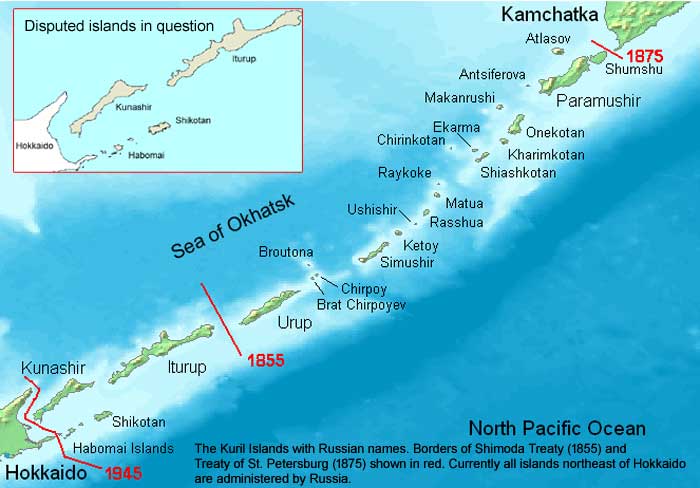 Relations between Russia and Japan have strained mainly due to the issue of obstinate territorial dispute between the two nations over the Southern Kuril Islands. Peace talks between Japan and Russia have remained at halt ever since the World War II. Soviet forces had seized the four Islands off the coast of Hokkaido at the end of the WWII, which Japan claims as its northern territories. It comprises of Etorofu Island, Kunashiri Island, Shikotan Island and the Habomai Island that have been controlled by Russia.

In the 1945 Yalta conference, the Kuril Islands were promised to Stalin by the United States, in return to the attack on Japan by the Soviet after the defeat of Nazi Germany. However, this deal was blocked by the US following the cold war determination to keep Japan in the western camp and the peace treaty with Moscow collapsed. The 70-year-old dispute over the Islands has prevented the conclusion of a peace treaty to end the World War II.

The 1956 Joint declaration between the two nations formally ended the war with a hope for establishment of cordial relations. It was viewed as the initial basis for peace talks between the two nations. However, despite the declaration, the 70-year old territorial Island dispute has not been resolved yet due to dissimilarities in perspective between Moscow and Tokyo about the Kuril Islands. It mentions that the Habomai and Shikotan Islands would be handed over to Japan after the conclusion of a peace treaty.Japan believes in affirming its sovereignty and wants the territorial issue to be resolved first for the peace treaty to be signed.

On the other hand, Russia is of the view that there is not even a question of debate or discussion on territorial issue as the Russians feel that it is the ‘Russian Federation territory’ and calls them the ‘Southern Kurils’. It is reluctant to renounce the claim of the four Islands because it ensures Russia’s naval access to the Western Pacific.

Russian President Vladimir Putin had put forth his argument believing that there is no indication of sovereignty over the northern territories in the declaration. Furthermore, he has taken a firm stance on not leaving behind its sovereignty over the northern territory even if the two islands are handed over to Japan.  Moscow feels that their claim of the four islands is legitimate as an outcome of the war and it will be difficult to hold peace negotiations without Tokyo accepting Moscow’s stance.

In November 2018, President Putin and PM Shinzo Abe met on the sidelines of East Asia Summit and decided to end the territorial dispute by PM Abe agreeing to negotiate based on the 1956 declaration. This implicitly shows that he has given up the two islands to maintain peace with Russia.

Putin said that the joint declaration signed by Japan and the Soviet Union in 1956 neither mentions a basis for returning Habomai and Shikotan nor clarifies which country has sovereignty over the islands. His comments imply that Moscow is reluctant to return even the two small islands to Japanese rule. According to the Japanese plan, if the two Islands Habomai and Shikotan Islands are given to Japan, negotiations for the decision on Iturup and Kunashir Islands can be held.

Nevertheless, in a Diet session in February 2019, PM Abe made it clear that the country is not in the favor of receding regarding negotiations with Moscow. He also believes that the Islands are the inherent part of the nation’s territory. Therefore, Abe mentioned that he aims to sign the peace treaty after the territorial issue is resolved. Foreign Minister Taro Kono plans to visit Moscow in mid-May to hold talks with Russian Foreign Minister Sergey Lavrov over the peace treaty.

The return of two Islands would even cause a sense of criticism in Russia as the Russians may feel that they are surrendering two of the Islands. In addition, the majority of Russians do not distinguish between the Islands designated by the 1956 Declaration and the two larger Islands claimed by Japan. Therefore, recently, Abe mentioned that he aims to sign the peace treaty after the territorial issue is resolved.

When Russian foreign minister Sergey Lavrov and Japanese foreign minister Taro Kono met in Moscow in January 2019, Lavrov told his Japanese counterpart that, “sovereignty over the islands was non-negotiable, this is Russia’s territory”. In current negotiations, Russia has an upper hand since it has the control over the islands and it does not see any valid reason for the Kremlin to push forward the peace deal. For Russia, concluding a peace treaty with Tokyo would rather mean that they are returning the two islands as a generous gesture, which could be hard to digest for Japan.

There are certain benefits for signing a peace treaty between Tokyo and Moscow. If we look from Japan’s point of view, a peace treaty could help in resolving the northern territories dispute and settle the WWII related conflicts with Russia. The two nations could also closely cooperate in keeping peace I Northeast Asia and maintain geopolitical balance between the two. The establishment of a peace treaty could also help in bringing Russia closer to the east. The Russian economy has been facing stagnation due to falling oil prices and sanctions. Henceforth, the closer ties with Tokyo may help in improving trade and economic relations with other countries too.

Russia fears the deployment of U.S Military forces on two of the islands after the handover to Japan. Therefore, Moscow has put forward the view that Tokyo shall guarantee it will not allow U.S. forces to be positioned on the two Islands. Moreover, Japan confirmed that U.S. needs Tokyo’s consent before establishing a military base, which relieved Russia of that fear to a certain extent.

Russia also seems to be nervous about China’s military buildup and its growing influence across the world. Moscow has always seen Tokyo as an ally to keep a close check on Beijing. Russia and Japan must cooperate mutually in terms of security aspect, keeping China in mind. Furthermore, if Abe plans to drop the Japan’s long lost goal of achieving the return of four islands in order to develop cordial relations with Russia, Putin might be able to settle the dispute. However, Abe expressed that settling the conflict was difficult but necessary. If it is delayed, then there is a possibility of Japan being put at a disadvantage because the islands are in Russia’s control since 70 years and many Russians have even settled there.

Most of the experts believe that it is beneficial for Tokyo and Moscow to overcome the dispute and develop a normal relationship, which could even maintain geopolitical balance in their favor. Abe’s sole motive is to pursue the return of Habomai and Shikotan to Japan and continue further negotiations for Etorofu and Kunashiri.

If the dispute is resolved, the two nations can deepen their bilateral cooperation in security and foreign policy and can together counter any threat from China. Abe has expressed his utmost desire to come up with a concrete solution to end the peace treaty and reach an agreement by June 2019 at the G20 Summit in Osaka.

However, according to Japanese sources, there is an adverse reaction in Russia over the return of the northern territories to Japan and efforts to advance further negotiations. Despite certain level of hope, whether Putin and Abe are able to carry out the negotiations into a full swing and to a successful end remains to be observed carefully.