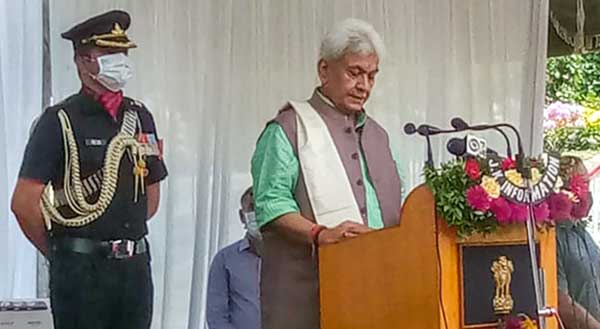 The union territory (UT) of Jammu & Kashmir (JK) is undergoing a metamorphosis. Once famous world-wide as “Heaven on Earth”, it has been turned into a hell because of three decades of meaningless bloodshed perpetrated by radical jihadists employing terror as the means to achieve the expected end of an exclusive Islamic State challenging the very foundation of India’s core values of secularism and democracy.

Apart from radicalisation and terrorism, the state also became a victim of poor governance, institutionalised corruption, nepotism, favouritism, and regional discrimination. New Delhi finally acted on 05 August 2019 by abrogating the two facilitator articles 370 and 35A. It also reorganised the state into two UTs with rather peaceful Ladakh being made a separate UT. Ever since then, the JK UT is undergoing “Manthan” to restore its pristine glory.

The process has been gradual and annoying with the people feeling dissatisfied despite the central government’s best efforts to make the change visible to people. One possible reason is the natural tendency of “resistance to change”. The other causative factor is the onset of Corona pandemic within six months of the appointed date when the division into two UTs became effective.

The first LG of the UT, a career bureaucrat, had a short but fruitful tenure and had to be relieved for his better utilisation at the national level.

He has been replaced now by a career politician with a brilliant academic background and impeccable integrity. A three term Member of Lok Sabha is known as “Vikas Purush” among his constituents. His administrative skills were honed during his ministerial tenure in Modi government 1.0. He has assumed the leadership of administration with a brilliant track record and stupendous hopes from him not only by the government at New Delhi but also by the people of JK UT, who among other things have been yearning for resumption of stalled political process. To rule JK has always been a challenge and Manoj Sinha now wears the thorny crown.

Though he has listed his priorities as accelerating development, rebuilding people’s faith and return of peace, he has to overcome many administrative, political and economic challenges before he can claim success.

Among administrative challenges are the control of corona pandemic, restoration of 4G, to satisfy the demands of daily wagers, SPOs (Special Police Officers) and other adhoc appointees (a legacy of the elected governments of the past),refurbishing of bureaucracy, implementation of domicile rule to prevent forgery and misuse, resolution of problems being faced by 5300 displaced POJK families in registering for domicile, successful conduct of delimitation, war on corruption, financial prudence, end of favouritism and nepotism and finally restore faith of the people in administration. People have no choice but to live with the administration because no popular government can be installed till delimitation is completed and elections are held.

All this can be achieved only if there is a thorough overhaul of the administrative machinery. The decade old pre- abrogation insomnia has made the existing setup lethargic. Moreover, connect between the people and bureaucrats is lacking due to inaccessibility factor. Too much centralisation in the secretariat has encouraged corruption and is rampant at lower end of administration as well. Emphasis is on issue of orders and instructions rather than on their implementation.

Handling of Corona is a classic example while plenty of orders and protocols have been issued, they are blatantly violated with no check. The long queues at Lakhanpur entry point where social distancing and wearing of masks are an exception than norm but emphasis is on checking the entry passes. There is need to induct fresh minds which can plan and implement the huge developmental agenda envisaged by New Delhi. The administration has to reach to people.

The old practice of touring the area and camping by the district, sub district and tehsil level officers must be resumed. Back to Village Programme should be made a regular quarterly feature with emphasis on delivering and interacting with people rather than a media event or self-promotion event.

Among his political challenges are the revival of much needed political process in Valley, empowerment, functioning and strengthening of Panchayati Raj Institutions, emotional integration, a tight rope walk to ensure equality between the two regions, avoid appeasement, be sensitive to Jammu region and Dogra heritage and culture as well, nurture new leadership acceptable to the people through talent hunt among the youth, listen to the Agencies but avoid being overwhelmed by them and the most challenging and daunting task would be to convince the status quo lobby to change the mindset and accept the new order.

Rightly, the first official engagement of the LG was with the grassroots level elected representatives. They are the only visible symbols of a functional democracy in the UT. But till now they have received only lip service without caring to make them functional through delegation of powers which still remain concentrated in the hands of the bureaucrats. Cosmetic changes like according protocol status equal to that of a district magistrate which virtually is impractical and a life insurance of 25 lakh for all panchayat members and elected members of municipal bodies in case of death due to militancy. Security of the elected representatives is a major issue.

LG will also have to deal strictly with subversive elements within the Valley including the status quo lobby which is against the grassroots democracy and resumption of political activities particularly in Kashmir. A lot needs to be done to rid the Panchayats from the stranglehold of bureaucracy and strengthening them to work independently.

The economic challenges are obvious but would need his personal attention because many innovative and out of box decisions would be needed to boost the sagging economy worsened due to Covid effect. A peaceful and safe environment is needed to encourage potential investors.

JK due to its strategic location and a hostile neighbour has security problems which cannot be wished away at the same time the entire focus cannot be on security alone. Here again, Manoj Sinha has a big challenge. Restoration of peace is easier said than done as long as the ecosystem in the state remains affected by the bug of soft separatism, radicalisation and terror supporters. Mere killing the terrorists will not end terrorism and usher peace.

The seamless integration as it exists today between the Army, JKP and CAPFs needs to be further strengthened by ensuring that any attempt at turf war is nipped in the bud with impunity. Regular meetings of the Unified Headquarters with LG in the chair are needed to ensure sync between security and political requirements. They should never be at cross-purpose.

Last but not the least is the challenge of de-radicalisation since radicalisation has become deep rooted. Modernisation of Madarsa Education, formulation of Madarsa Regulation Board, strict check over social media, skill development, prevention of misuse of religious places for anti-national propaganda, screening of maulvis, ban on Jammat, ban on separatist activities, promotion of Sufism, music art and culture, revival of traditional folk arts are a few means to help in de-radicalisation.

The LG rather than laying down priorities may consider some of them to run concurrently to regain the confidence of the people.