It is time to wrest the initiative from Pakistan 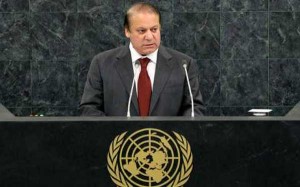 There seems to be no stopping Pakistan from digging its own gave on the Kashmir issue.  Pakistan Prime Minister Nawaz Sharif faced considerable embarrassment for his unfortunate address to the United Nations General Assembly (UNGA). The international media did not have a single good word to say for the same.

A series of immature statements on the same lines have recently emanated from the foreign office of the country. The statements will serve no purpose other than further degrading the credibility of the government.

Prime Minister Nawaz Sharif is a master in skirting political issues; he would never be so blunt! It is, therefore, quite obvious that his speech had been scripted to the last coma by the Pakistan Army.

At the UNGA, Prime Minister Nawaz Sharif created a fair degree of antipathy by adopting a monotonous oft repeated stand on Kashmir. He described the breakdown in talks between foreign secretaries of India and Pakistan as a “missed opportunity” and went on to parrot the tried and tested formula on Kashmir –right of self determination, unfilled promise of holding plebiscite etc. He did so knowing full well that nothing would come out of it. He felt no compunction in wasting the time of the august body and the world leaders present there.

It is common knowledge that Prime Minister Nawaz Sharif is a master in skirting political issues; he would never be so blunt! It is, therefore, quite obvious that his speech had been scripted to the last coma by the Pakistan Army. After having delivered his address he hurried back home to see if his masters were satisfied with his performance and willing to give him and his government the much needed lease of life.

The Pakistan army seems to be rattled by the negative vibrations that its crude policy generated in the UNGA. Instead of carrying out a course correction it has directed its vassal government to increase the anti-India rhetoric. Latest statements emanating from Pakistan’s foreign office are terming Kashmir as a “legal issue,” whereby, plebiscite is an unfinished agenda of the United Nations. The spokesperson of the foreign office further talks of Indian “inflexibility” on the Siachen issue and the “routine nature of the consultations with separatists” that derailed the secretary level talks.

At the UNGA, Prime Minister Narendra Modi disappointed all those looking out for a huge drama in the wake of the statement made by Prime Minister Nawaz Sharif. He chose to brush aside the topic rather disdainfully. “Raising it at the UN won’t resolve bilateral issues,” was his caustic remark. Thereafter, he did not refer to the matter at all throughout his stay in the US. India did not even exercise her right to reply option thus making it very clear that it remain unaffected by the reference made by Prime Minister Nawaz Sharif. It is this brush-off that has motivated the “needling” that the Pakistan government is now indulging in; a typical reaction of a military establishment.

Pakistan has already made its intention clear by indulging in a ceasefire violation in the Poonch sector.

A riposte from Pakistan to the statement made by Prime Minister Narendra Modi came from the terror monger and most wanted international criminal, Hafiz Saeed, who seems to have taken over as ex-officio foreign minister of the country so far as India is concerned. “India is herself responsible for instability in the region, while perpetual peace cannot be achieved until Kashmir issue is resolved. We appreciate Nawaz Sharif’s straight forward commendable statement on Kashmir at UNGA.  It represents National aspirations in verbatim,” Hafiz Saeed is reported to have said. “The speech given by Indian Prime Minister Narendra Modi is merely throwing dust in the eyes of the world on the atrocities carried out on Kashmiri’s.” he reportedly added for good measure. It cannot get more obnoxious than this!

As things stand now, it is quite apparent that the positivity generated at the time of the swearing-in of Prime Minister Narendra Modi was quite misplaced and it is “dirty business as usual” on the Kashmir front so far as Pakistan is concerned.

The bottom line is that the Pakistan’s Kashmir policy has been wholly and irrevocably wrested from the Nawaz Sharif led government by the Pakistan Army and its Jihadi partners. It stands to logic, therefore, that India will have to contend with continued ceasefire violations, infiltration attempts and terrorist activities in the hinterland in Jammu and Kashmir.

…for India to adopt a dynamic two pronged policy … The first prong should make spread of terror too costly for the adversary. The second prong should concentrate on increasing awareness levels about the actual situation in J&K.

Pakistan has already made its intention clear by indulging in a ceasefire violation in the Poonch sector.  There is also no doubt left that the infamous Inter Services Intelligence (ISI) will continue using its assets in Kashmir to spread discontent and engineer social disruption.

The unfortunate writing on the wall is that Pakistan will continue with these activities regardless of the humanitarian crisis on both sides of the line of control due to the unprecedented floods and inundation. The architects of terror have no love lost for the common man in Kashmir and are not guided by such compassionate considerations.  No situation, however bad, can stop them from their malevolent designs directed towards Jammu and Kashmir.

It would be beneficial for India to adopt a dynamic two pronged policy to deal with the emerging situation. The first prong should make spread of terror too costly for the adversary. The second prong should concentrate on increasing awareness levels about the actual situation in Jammu and Kashmir.

A loud and clear message should be sent to the terror recruits in Pakistan that they would face certain death while making an infiltration attempt. A fear psychosis should be created in their minds. At the same time the actual “legal aspects” should be communicated across the world; the fallacies surrounding role of India army in Jammu and Kashmir, Article 370 and state suppression etc should be exposed. The duplicity of the self serving supporters of foreign sponsored terror in Jammu and Kashmir should be laid bare. The manner in which the youth is being misinformed, misguided and exploited should be uncovered. The need of the hour is to wrest the initiative from the terror mongers and get into the driving seat of this fight against forces of evil.