It is Time Nepal Army Tookover! 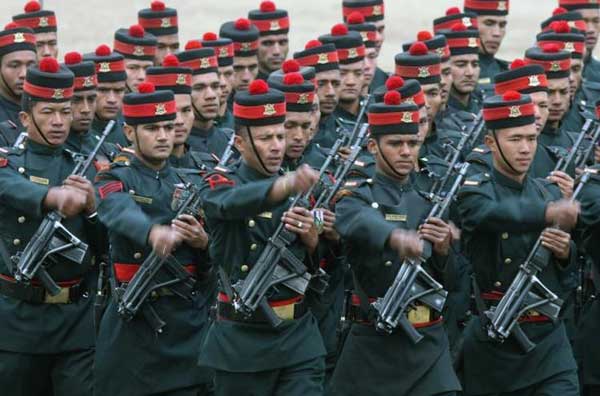 The tragedy of Nepal’s second Constituent Assembly elected in end 2013 is signified by the outrageous proposition that the Maoists, who were comprehensively rejected by the people and managed to merely survive as third poor political force after the elections are ruling the country. The political situation therefore is even worse than the first Constituent Assembly, which was killed by none other than the Maoists after four years in 2012. Nepal, since the demise of monarchy is gasping for stability. If the country is still managing to plod on, it is because of the residue of structures evolved under the monarchy for over two centuries.

The Maoists, all over the world believe in a single party rule and are therefore congenitally unfit for parliamentary democracy.

This is not unexpected. What is reprehensible is the shallow but conceited political, strategic and military understanding displayed by the policy makers in the last Indian dispensation in dealing with the perpetrators of Left-wing extremism in Nepal. The legitimacy invested by India on Prachanda, is costing both India and Nepal dearly. But such is the seductive power of puerile leftist intellectualism of a segment of Indian policy makers that they could hardly foresee the consequences of bringing the Maoists in Nepal at once at the helm. The basic imperative that they should have not ignored is that in a democracy, all contending political forces must be prepared to sit in the opposition if the verdict says so.

The Maoists, all over the world believe in a single party rule and are therefore congenitally unfit for parliamentary democracy. Their temporary compromises or adjustments with other political players should be seen only as a tactical reprieve. Yet, we entrusted the Nepal policy in the hands of some of the most discredited leftist politicians and members of academia.

It is not only the Constituent Assembly (CA), which is floundering on the basis of present construct, dispensation, arrangement and attitude, the Maoists have ensured that every institution of reckoning i.e. the judiciary and the speaker of the CA echo the calling of Maoists. The present Speaker, Onsari Gharti Magar, was a hardcore Maoist and member of UPCN(M) and so is her husband, Barsaman Pun.In a blatant partisan move, Gharti, in March this year returned the list of recommendations for appointment of judges, in reality because it did not contain Maoist sympathisers.

A Maoist judge or a politician at heart will always remain sympathetic to violence and terrorism. Like many other countries it is now grievously afflicting Nepal.

The failure of the first Constituent Assembly to draft Constitution exposed that New Nepal was a stillborn baby. Complete disarray of constitution making process compelled the judiciary to step in. The then Chief Justice Khil Raj Regmi had to be roped in as the de facto Prime Minister between 2013 and 2014.Thus, the respectful distance between executive and judiciary disappeared and heralded the politicization of judges.The latest approval of 11 appointees to higher judiciary by the parliamentary seeks to further erode the institution. The judges sponsored by various political parties including Maoists is based on quota and compromise.

Lately, some leftist judges have taken a totally criminal position with regard to terrorist activities committed by the Maoists during decade long underground phase. It may be recalled that in May this year, before Prachanda became PM, the Supreme Court of Nepal issued a contempt notice on him for criticizing the judiciary for its verdicts on civil-war (19996-2006) cases.

Though there are various ideologies that impact on human beings, two ideologies, i.e. Jihadism and Maoism, are specially known for producing terrorists based on indoctrination that goes right till the grave. A Maoist judge or a politician at heart will always remain sympathetic to violence and terrorism. Like many other countries it is now grievously afflicting Nepal.

The very concept and territory of Nepal was conceived, cultivated and assimilated by the Shah dynasty. The monarchy had its moments of glory and moments of debility. Nevertheless, it was an institution that built the philosophical, religious, cultural and institutional framework of landlocked Nepal sandwiched two giant neighbours between India and China. Demographically and culturally however it is only India that has mainly impacted Nepal. Even the parliamentary democracy that the Maoists have taken advantage for gaining legitimacy is an export from India and not their benefactors, China. The only ideology that that China has exported is Communism and its offshoot, Maoism.

The deep nexus between donor funded NGOs, civil society movements and their criminal links with political parties has brought Nepal to the edge of precipice.

The Maoists in Nepal have no less been spurred and assisted by western NGOs, who have infiltrated every organ or facet of Nepal including judiciary, and the security apparatus. Most of the 11 names approved for appointment to higher judiciary have affiliation with some donor NGO. While this author was on field visit during the writing of the book ‘The Unmaking of Nepal’, he came across embassies of countries, which had no business or even the economic strength to sustain the inexplicable diplomatic reach. A deeper inquiry on some of these NGOs particularly those of the Scandinavian countries revealed that they were in truck with the Maoists to further their evangelic agenda. In pre-Maoist Nepal none could even dare to indulge in religious conversions.

No wonder once the Maoists assumed power in 2008, the first thing they did was to knock-down the ‘Hindu’ status of the country, something which was the strongest adhesive for nation-building in the case of Nepal. This was despite the fact that there was not a whimper of demand from any quarters in the country to adopt an alien and baseless epithet of ‘secularism’. The only purpose this move served was to open the flood gates for religious conversions in Nepal by the Western NGOs. The Maoist controlled areas in India too are victims of the same phenomenon.

The deep nexus between donor funded NGOs, civil society movements and their criminal links with political parties has brought Nepal to the edge of precipice.

In fact, every institution in Nepal stands on the brink of collapse. The people see no salvation from instability. The country has had six Prime Ministers in last five years. The Maoists, the Chinese and the Western NGOs are bleeding Nepal’s religion, culture and nationhood. Religious conversions bleed the environment of target countries as well because they cause the separation of people from their sacred association with nature. This sacred component of Nepal’s nationhood is only understood and empathized by India.No one else cares about Nepal.

Despite provocations, the Nepal Army has remained totally apolitical and has rather conducted itself as a very mature institution.

In the dark clouds that have engulfed Nepal, there is one silver lining and that is the Nepal Army. This is an institution, which has e survived the repeated onslaughts by the Maoists, and the NGOs. It began with the attempt to dislodge the then Army Chief Rookmangud Katawal in 2009, which thankfully was averted and led to the exit of Prachanda. The Maoists also tried to change the basic character of the Army by securing the concession of integration of 30,000 combatants in the Nepal Army. Thankfully, again only 1,450 made the final cut and only 70 made it to the Officer Cadet level. Intrinsically, Maoists consider the Nepal Army as their enemy.

For the people but, the only institution that they finally pin their hopes on is the Nepal Army.

During two meetings with the President of Nepal, this author had warned him of the consequences of Maoists attempt to undermine the status and the role of the Nepal Army, as the final arbiter of the country’s security. The Maoists view the Nepal Army as the only formidable block on way to complete takeover of Nepal.

Despite provocations, the Nepal Army has remained totally apolitical and has rather conducted itself as a very mature institution. Under the circumstances, the Nepal Army however cannot ,but be concerned about the failing status of the nation-state of Nepal. It is for this reason that the Nepal Army Chief, Rajendra Chhetri has described the situation of the country as “very volatile, difficult and challenging” during his address to Senior Officers of the Nepal Army. The Army Chief also castigated the Western NGOs of undermining and subverting the Nepal Army by instigating that it is a ‘Hindu Army.’

If this Constituent Assembly too fails to deliver a new nation-state or a New Nepal, there would be no alternative for the Army but to intervene to save the country.

In 2009, this author in his book ‘The Unmaking of Nepal’ had given three emerging scenarios in the country. They were :-

It is the third scenario, which is making people of Nepal increasingly nervous because of the growing impasse on the issue of federalism between the Madhesis and the Hill people. If this Constituent Assembly too fails to deliver a new nation-state or a New Nepal, there would be no alternative for the Army but to intervene to save the country. Already many politicians and intellectuals are clamouring for intervention.

7 thoughts on “It is Time Nepal Army Tookover!”