It is “Advantage Army” in Counter Terrorism Operations in J&K 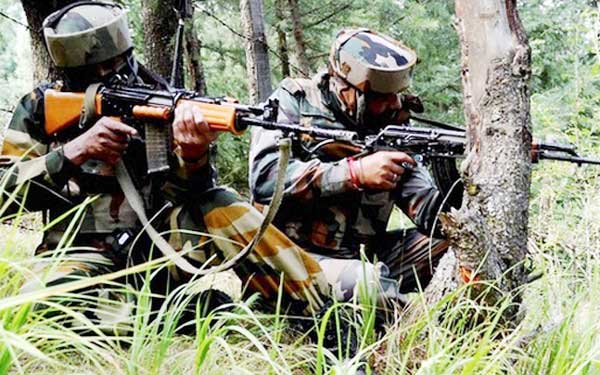 The cycle of violence in Kashmir is abating at a very fast pace! With winter approaching, and the seat of power moving to the winter capital, Jammu, there is not much that the foreign sponsored disruptive elements can do anymore. They have retreated with egg on their collective faces.

What has gone unnoticed in this period of turmoil is the clinical manner in which the Indian Army has managed to keep the terrorist and infiltration threat in control, despite desperate attempts by the foreign forces to increase the threshold of violence.

In fact, the intensity of counter terrorist operations has increased considerably over the last week or so. Intelligence agencies are, once again, receiving precise and timely information which is facilitating conduct of well planned, swift and decisive operations with resounding success.

On November, 5, a terrorist was killed in Shopian in a joint operation followed by yet another successful strike at Durjan on November, 7, that led to the killing of yet another terrorist. Security forces did not buy casualties in any of these operations since they were well planned and based on specific intelligence.

In a one of its kind incident on 04 November, a local terrorist, Umaq Khaliq Mir, resident of Tujjar, North Kashmir  and aligned with the foreign terrorist organisation Lashkar-e-Toiba (LeT) surrendered at the behest of the Indian Army that had established a cordon to flush him out.

The troops involved in the cordon realised that the trapped terrorist was a local who had been misled into following the path of terrorism. They brought his parents to the spot to convince him to lay down arms, which he did, after an emotional appeal from his mother.

It goes without saying that taking a decision of this nature, while conducting a counter terrorist operation, is fraught with risk for the troops; yet, they took the chance and saved a precious life. The boy has now vowed to abjure the path of terrorism and violence. By this act, the army has, once again, demonstrated its humane face and has won the affection of the locals in the area.

The successful turnaround that has been achieved in counter terrorist operations is, in no small measure, due to the humane, people friendly acts of the Indian Army like facilitating the surrender of Umaq Khalid Mir.

Yet another reason for the successful turnaround is that the people are fed up of the disruptive activities being engineered from across the border and carried out by some immoral locals with vested interests. The people have realised that if terrorism is contained, the capacity of the disruptive forces to fructify their ungodly agenda will reduce considerably.

They are, therefore, doing everything possible and sometimes at great risk to their own lives, to provide information about terrorists to the security forces and are also actively assisting in security operations.

Thus, the strategy formulated by terrorist masters operating from across the border to supplement the civil upheaval engineered by paid stone pelters and goons with a spike in terrorism and infiltration, so as to scuttle the development initiative of the government and the security forces, has met with abject failure.

While the disruptive and divisive elements managed to gain some leeway and held the region to ransom for all of three months, the second and third prong of the strategy, which envisaged infiltration and involvement of terrorists, could not take off.

Infiltration bids were successfully foiled and terrorist were not allowed to raise their heads beyond a point, thus negating the build-up so necessary to keep the momentum of the unrest going.

Winters are considered to be advantageous for the security forces since the terrorists are forced to leave their hideouts in the jungles and come into urban areas where they are easy to prey upon. Infiltration also comes down to a trickle due to snow bound conditions. Of course, operating under such extreme weather is difficult for the security forces but this does not come in the way of their taking full advantage of the prevailing conditions.

Now, as normalcy is returning, the security forces and intelligence agencies are rapidly building up on their operations to ensure that the terrorists are dominated in totality during the forthcoming winter season.

Along with operations the army is spontaneously and unilaterally extending a helping hand to the people to get over the turmoil caused in the last few months. Being sensitive to the loss being suffered by the school going children, the army is going out of its way to motivate them to get back to their studies and facilitating the running of schools. The “School Chalo” campaign by the army has given confidence to parents, teachers and students in equal measure and the result is quite evident on ground.

It goes without saying that the army will do everything possible to ameliorate the suffering of the people during the chilling winter and will try to offset the discrepancies in preparation that could have come by due to the disruption of normal life for many months. This is a traditional practice that will see more intensity in coming times.

It is very rightly said that “every cloud has a silver lining!” The three months of turmoil has caused untold misery to the people of Kashmir and it is hoped that they would never again have to face such deprivation. The silver lining here is that the counter terrorist operations are gaining momentum due to the deep loathing that the people have developed for terrorists and their perpetrators and the trust that they are reposing, once again, on the army and the other security forces. So it is “Advantage Army” yet again.

It is hoped that the improving situation will lead to striking of a mortal blow on the terrorists that would end the menace from the beautiful valley for all times to come.