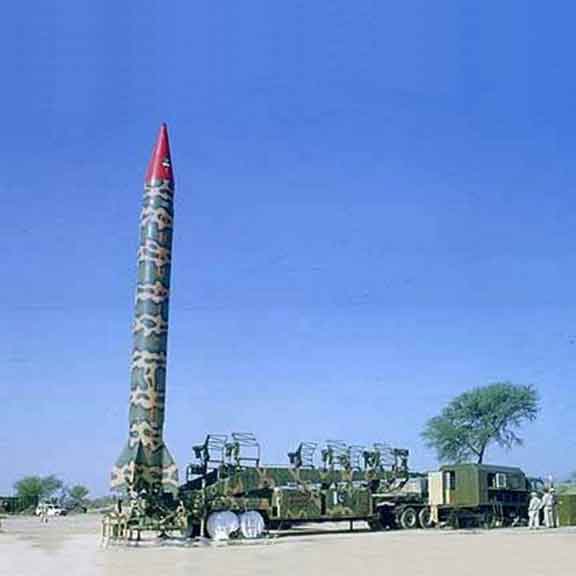 News reports from Pakistan heralding forthcoming test firing of nuclear capable surface-to-surface ‘Nasr’ missile which has a range of 180 km and boasts of high degree of accuracy signal the country’s mindset of being one up with India. Such statements are indeed rare from that country’s military that controls its rather clandestine missile and nuke projects. It was as recent as May 10 that Pakistani army had boastfully announced carrying out of a successful test firing of another short-range nuclear-capable ballistic missile and reiterated that the country had developed a strong nuclear deterrence capability and potential to safeguard Pakistan’s security against aggression. The missile in question was India-specific Hatf III, also called Ghaznavi that is said to have a range of up to 290 kilometres and can also carry conventional warheads.

The launch reportedly came at the end of a field training exercise conducted by Army Strategic Force Command to test its overall operational readiness.Operational readiness against whom? Aren’t the relations with India, which is committed to ‘no first use’ of nuclear weapons, showing signs of thaw as a result of recent confidence building measures in the wake of Zardari- Manmohan Singh meeting in New Delhi? Unlike India, the Islamic nation has apparently no long or short-term security threat from any other country in its neighbourhood despite its sometimes hot and cold relations with Afghanistan. Geographically, People’s Republic of China, Islamabad’s trusted ally is located on its north and has a strategic all-weather road connectivity through western Himalayan Karakoram range in Pakistan Occupied Kashmir. China is not only Islamabad’s most dependable collaborator but also trusted supplier of military equipment, an array of ballistic missiles as well as blueprints for nuclear weapons.

Other neighbour on its western borders happens to be Iran that does not pose any threat to Pakistan which in fact has more internal enemies in the form of various terror groups than the external ones. Obviously, the finger of hostility is pointed towards the only country that happens to be India which strangely has always been extending hands of friendship towards Islamabad despite its provocation of hostility from time to time.

Why has Islamabad embroiled itself with illusory nuclear threat from India by displaying frenzied desperation to go to any length despite its failing economy just to show off nuclear and missile parity with its much larger eastern neighbour notwithstanding repeated ‘no first use’ assurances from New Delhi?

Barely a month before, in the wake of India’s launch of 5000-km range ballistic missile Agni-V, Pakistan within no time countered the move by test firing an intermediate range ballistic missile capable of hitting targets anywhere in India. Interestingly, it has been a customary practice with military hawks that control Pakistan’s liberally-funded missile and nuke projects, to proclaim test firing of a missile in the aftermath of the similar launch by India. For example, in the first half of 1999, within a very short span of three days after India’s Agni II was hurled into the space, Pakistan surprisingly achieved a similar feat not once but twice – in the form of launching Ghauri II and Shaheen. These were in fact North Korean Rodong and Taepo-Dong missiles procured from Pyonyang and placed on the launch pads in order to instantaneously pay back to India in the same coin.

Why has Islamabad embroiled itself with illusory nuclear threat from India by displaying frenzied desperation to go to any length despite its failing economy just to show off nuclear and missile parity with its much larger eastern neighbour notwithstanding repeated ‘no first use’ assurances from New Delhi? Dot not such claims of counter launches of missiles named after medieval Muslim invaders in response to India’s transparent test firing schedules give an appearance of a comical parody, depicting the theocratic nation’s frenzied desperation to go to any length to achieve illusory one up man ship with India? Is it not possible that media statements issued by Pakistani military’s Inter Services Public Relations publicising missile tests are mere subterfuges?

The misleading strategic competition with India has spurred Pakistani efforts to acquire ballistic missiles by hook or crook and strangely the country claims to have done it without outside assistance. Pakistan’s worrisome missile arsenal includes short, medium and long-range missiles. As of 2011, the country is believed to possess a wide variety of thermonuclear MIRV-equipped medium-range ballistic missiles with ranges up to 2500 km. Islamabad also claims to have developed nuclear tipped Babur cruise missiles with ranges up to 700 km. It also brags of capability to design and deploy Intermediate-range ballistic missiles such as the Shaheen-III which will not only enable Pakistan to increase ranges of up to 4500 km but also spur the claim to be at par with India’s Agni-V. Pakistan is also believed to be developing tactical nuclear weapons for use against India on the battlefield with ranges up to 60 km such as the Nasr missile tipped with miniaturized warhead.

It is an open secret that the active Chinese and North Korean help has sustained the Islamabad’s hawkish missile and nuke programmes. North Korea having carried underground nuclear tests is known to have a menacing militarized nuclear plan and it is quite possible that Pakistan with proven nuke capability is rendering necessary assistance to Pyongyang in this field in order to obtain a liberal supply of missiles, spare parts and related technology. The procured missiles parts or the kits are thereafter assembled and placed on the launch pads ready to be fired in the wake of transparently pre-announced tests by India.

Such actions by Pakistan have kicked off a missile race in the South Asian region which Islamabad is bound to lose. Moreover, there is a possibility of nukes and missiles falling into the hands of well-entrenched Islamist terrorists who are believed to have a sizeable number of sympathizers in Pakistani armed forces. It must also be not forgotten that such hawkish acts negate the confidence building measures that the civilian leadership on either side tries to initiate from time to time.