Is United Kingdom a new hub for anti India activities? 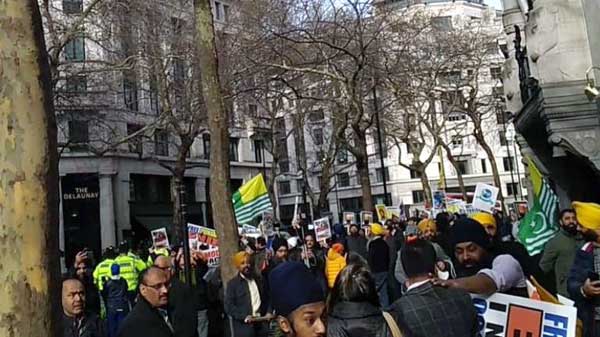 If protests and violence outside India House in London during the celebration of India’s Independence Day on August 15, 2019 and the past events are any indication then, nobody should have any qualm that United Kingdom(UK) has become a new hub of anti India activities. The protestors of Hizb-ut-Tehreek, an UK based Kashmiri separatist group, attacked the members of Indian community with eggs and water bottles.

The video footages also show burning of Indian tricolour and stone pelting by the protestors on Indian diaspora. They also vandalized the India House building and broke its window panes. However, the British foreign office mentioned this as an “overwhelmingly peaceful protest” even after Scotland Yard reportedly arrested four protestors for obstructing police and possessing offensive weapons.

There have been multiple instances in last one year and so that lend credence to this belief that United Kingdom is now a safe heaven for the separatist groups fanning anti India rhetoric, raising funds, holding violent protests in favour of Khalistan and independent Kashmir. Not long ago, banners carrying anti India messages were flown by the helicopters over the cricket stadiums during the World Cup. There must have been a lot of planning and coordination gone into it between the separatist groups and local flying clubs to execute this. The candid support of Mayor of London from Pakistani origin cannot be ruled out.

In August 2018 a separatist group Sikhs for Justice (SFJ) asking for “Referendum 2020” with the goal of creating Khalistan, held protests at Trafalgar Square in London. The British Government’s position was that a ‘peaceful demonstration of views is within the British Law’ and thus ignored the request from Indian Government to block the event. As it so happened in that event, a clarion call to “arms and violence” was made during the protests thereby inciting Sikhs to take up arms to “teach Indian Government a lesson”.

Many pro- Khalistani and Kashmiri separatist outfits are operating with ease in UK. Pak ISI finds it easier to coordinate its plans with these separatist based in UK. Many websites like neverforget84.com, and 1984tribute.com operate from UK as web based radio and TV channels. Also the websites advocating Khalistan like www.sikhsforjustice.org and www.referendum2020 supported by Pakistan has a smooth run in UK.

In the month of March 2019, the Overseas Pakistanis Welfare Council and the Sikhs for Justice protested against India on the street of London attacking the members of Friends of India Society. The men wearing Sikh turbans raised slogans ‘Naraa-e-Taqbeer’ & ‘Allah-u-Akbar’ The British Government has not yet taken any action against those indulging in violence.

The reactions in the British Parliamentarians on the matter of abrogation of Art 370 in Jammu and Kashmir were mixed and mostly in sync with pro Pakistan separatists organizations operating in UK like United Kashmir Peoples National Party , Tehreek-i-Kashmir and Hizb-Ut-Tehri etc. The response were mostly on religious lines and the electoral demography of constituencies they represent.

There are reasons behind it. The languid fractured post Brexit UK politics has lost its sense of direction. It is also not able to reconcile with its fallen status of being once upon a super power of yester centuries. They are no longer the vanguard of democracy. The British Parliamentarians are hobnobbing with separatist groups in the hope of petty electoral gains and financial support.

The United Kingdom is also fast sliding into an appeasement politics towards its Muslim population which is nearly 3.37 million as on date comprising 5.8 % of the total population. The Hindu population is 6 lac and constitute only 1.4 % in UK. There are numerous muslim organizations spreading their propaganda through mosques and NGOs .

In 1961 there were only 7 mosques in UK , now the number has gone upto 1500 dotting the length and breadth of the country. It is said that there are 15 muslim dominated constituencies of the British House of Commons, out of which 12 are with Labour and only 3 with Conservatives. Besides, there are 16 more seats where Muslim voters can influence the elections and all those constituencies are with Labour Party. The Conservative Party is trying to reach out to muslim which is presently seen to be leaning more in favour of Labour.

The attempt to woo muslim voters by its Conservative government was the determining factor in the UK’s response when the matter regarding its Kashmir posture. The Conservative Government of UK was first to issue travel advisory, hinting towards a possibility of large scale disturbance in Kashmir Valley inspite of the Govt of India taking utmost caution and due diligence in handling the situation.

The main issue about an informal consultation is that it only allows sharing of opinions by the members and no formal outcome statement is required to be issued about the deliberations in the closed meeting of Security Council.

Now the information is coming that United Kingdom was near the position taken by China, insisting for releasing the statement after the consultations. It could not succeed because USA and France were opposed to this idea. The British representative reportedly said in the UN Security Council that the legal steps taken by India in Jammu & Kashmir should be in keeping with its international obligations and spoke of India’s need to ensure that the human rights of the people of Jammu & Kashmir are not violated. This was exactly what Pakistan always wanted and it was duly delivered by the UK.

India cannot afford to ignore these signs emanating from UK. This country seems to be hopelessly going wayward for small time gains and not discharging its role of safeguarding constitutionalism and respecting the rights of sovereign countries. This is unbecoming of a permanent member of UN Security Council.

One can understand the Chinese action as they too have territorial claims in Jammu and Kashmir. But what UK has done in UN Security Council this time and what all anti India activities have been taking place in UK in past are unacceptable. It will have long term repercussions in Indo- UK bilateral relations. India should treat UK as another unfriendly country and reciprocate in the language they can understand.

The price tag for friendship and business for UK with India must go up. It will be worth mentioning that Late Prime Minister Rajiv Gandhi in the year 1985 had threatened Prime Minister Margret Thatcher to cancel five billion export from UK if the activities of Khalistani leader Jagjit Singh Chauhan are not tamed. This had an instant effect and the UK was forced to put a check on the Khalistani leader operating from its soil. After a no-deal Brexit, UK cannot afford the luxury of this misadventure with India. They would need us more than we would need them.

The world community must be taking a note of UK siding with Pakistan, a known exporter of terrorism worldwide and a danger to the world’s peace and stability. This does not befits its stature of a permanent member of UN Security Council and would, therefore, calls for a review. Moreover UK should, of its own, stop playing with fire. The encouragement and support to Islamic radicals in UK is bound to develop to a Frankenstein story. At this moment, UK might under some false notion see this strategy as a diplomatic victory vis a vis India. But It will come back on them, the lone wolf fidayeen attack on Westminster Bridge in London is not too old a story and so is the bombing of London tube rails. The UK will have their hands burnt too.

4 thoughts on “Is United Kingdom a new hub for anti India activities?”