Despite the NIE report, President Bush has said “Iran was dangerous, Iran is dangerous and Iran will be dangerous if they have the knowledge necessary to make a nuclear weapon.” His National Security Adviser Stephen Hadley claimed that the US decision to pursue the sanctions route had made the Iranians change their policy in 2003 and it was necessary to pursue the same strategy to ensure that Iran remained on course. Hardliners like former US Ambassador to UN, John Bolton led the charge against the NIE saying that the report could be misread, the report was internally contradictory and insufficiently supported by facts and that Iran could use the report for disinformation.

However, whichever way these statements may be interpreted, the Bush administration has certainly been made to look awkward and clumsy in all this with its credibility taking another knock. The NIE report has become a major obstacle to those advocating the military option. Sensing this and the direction the Annapolis conference had taken in its attempts to isolate Iran, Arabs in the region have begun to make overtures to Iran. Qatar invited Ahmedinijad to speak at the GCC, while the Egyptians sent a high-level delegation to Iran, for the first time since they broke off relations in 1979. Ahmedinijad was in Saudi Arabia at the invitation of the Saudi king to perform Haj. It is possible that all three being strong US allies probably had prior approval for these overtures but these regimes are worried that should the military option gain approval in Washington, the consequences for them could be grave and avoidable. The GCC states would want to stay on Iran’s right side following a decline of US policy in the region.

According to the Iranians, Indian companies have shown interest in exploring 17 oil blocks. But India is a small and doubtful player. Apart from voting at the IAEA twice, the gas pipeline is in the doldrums. The State Bank of India has disallowed LCs on Iranian banks and Essar steel pulled out of a steel project in favour of installing one in America.

With crude selling at US $ 100 a barrel, energy dependent Italy and Austria have signed deals with Iran for the supply of gas. Iranian gas would transmit to Italy through Turkey and Greece. The Khomein Petrochemical Complex and the Italian company Basell also signed a 20 million euro contract for transfer of technology. The Iranians and the Austrian Oil and Gas Group were discussing a project for the transfer of oil and gas to Austria. The French giant Total was ready to invest 12 billion dollars in an LNG project, Royal Dutch Shell and the Spanish Repsol also have interests in Iran’s two main LNG projects; the Italian company Eni has no intention of pulling out of Iran. The Spanish energy company Fenosa, along with its subsidiary Socoin was awarded a 32.5 million euro engineering contract for the Iranian LNG project, while the Austrians OMV were still negotiating a similar contract, while a US $ 30 billion contract was separately signed for the import of liquid gas from Iran. The last round of discussions between Pakistan and Iran ended on December 21 and according to the Iranians, Indian companies have shown interest in exploring 17 oil blocks. But India is a small and doubtful player. Apart from voting at the IAEA twice, the gas pipeline is in the doldrums. The State Bank of India has disallowed LCs on Iranian banks and Essar steel pulled out of a steel project in favour of installing one in America. These decisions may be justified in strict economic terms, but coming as they do in the present circumstances, it does not look good.

Iran is not as isolated as the US would have it. The biggest buyer of energy is China. SINOPEC, the largest refiner in China, will increase its purchases of crude from 60,000 bpd in 2007 to 160,000 bpd in 2008 – a nearly three fold increase. Another Chinese state owned company, Zhuhai Zhenrong Corp will buy 400,000 bpd in 2008 and this will account for six per cent of China’s total crude demand. Apart from this, after three years of negotiations, China also signed a $ 2 billion deal to develop the Yadavaran oil field. The world’s second largest consumer of oil is obviously in a close strategic relationship with Iran. Obviously China is not going to allow the US to have a free run of the place; nor will Russia. 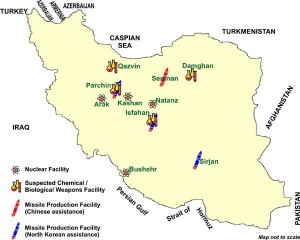 Even though the Russians are gas rich, they have been moving aggressively into the region under Putin, who has countered American moves on Russia’s periphery and in Europe by carrying the battle to West and Central Asia. Having been beguiled into winding down the Warsaw Pact in the Nineties, to be replaced by an eastward expansion of the NATO, The Russians under Putin have aggressively moved closer to China, reacted by abrogating missile treaties with US and strengthening the Shanghai Co-operation Organisation, as well as the Collective Security Treaty Organisation. The Iran theatre is in some ways an extension of the US-Russia rivalry in Europe and Russian suspicions about the now well known American moves into Poland and the Czech Republic setting up radar and missile defences. Putin withdrew from the Conventional Forces in Europe treaty in retaliation to American insistence to go ahead with their plans in Poland and the Czech Republic. In the decade ahead, both China and Russia, in competition with each other, or jointly in asymmetric opposition to the US, will seek geo-strategic space in Central Asia, West Asia and the Caspian.

US attempts to wean away the energy rich Central Asian states by having pipelines from these countries bypass Russia en route Europe. The Americans are worried that the Russians could translate their energy monopoly into untenable foreign and security influence that could hurt US-Europe relations. An example of this was when the Russians struck a deal with Austria when the two countries entered into a partnership which would allow Gazprom to have a base for further expansion into Europe.