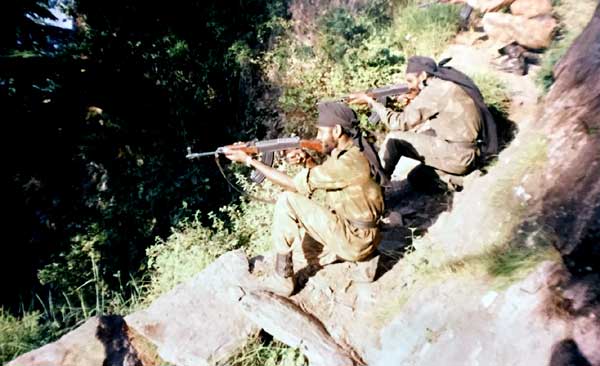 Increasingly, as the country becomes more powerful, external threats reduce in intensity, but the army finds itself engaged in restoring internal peace. This becomes of even greater importance when the external enemies use the internal fissures to fight a proxy war against us; a low cost, low risk option for our enemies.

Most thoughtful military men will agree that insurgencies will be principle challenge for the armed forces for several decades in future. It is also well understood that the battle has to fought on several fronts, economic, social, psychological, cultural and military front. Yet the current orthodoxy of yearning for ‘centralised command and control’ is an article of faith with the military. But if the war has to be fought on five fronts can centralised command really work? What is needed is diffused command but a centralized ‘control’, that has to necessarily be with the political head. One of most cerebral Prime Minister of India, late PV Naraisinha Rao used to often say that his main job is to manage contradictions.

The first lesson a military man has to imbibe is that India is a subcontinent with immense diversity of languages, race, culture and religion. This is often forgotten by not just the military but the other pillars of the state, bureaucracy and judiciary.

Some incidents stick in your memory, even several decades later. I recall a similar incident that happened with me. It was 1988 March/April and I along with a colleague from History Division of the ministry of defence were in Aizwal (capital of Mizoram state) in connection with the study of Mizo insurgency. We went to the house of late ShriThanga (IAS), then Principal secretary to the Chief Minister Lal Denga. The driver of our vehicle from Mizoram government acted as our guide and too us to Mr. Thanga’s house. As we entered the drawing room and met Mr. Thanga, the driver also nonchalantly sat in the seat next to me! Can you imagine such like happening anywhere else in India? While for us from Delhi this may be a shock, but apparently not for Mr. Thanga or our driver, as they exchanged pleasantries. The tribal societies in India (and elsewhere) are remarkably democratic and egalitarian. We, the so called ‘advanced’ plainsmen often forget it. To be fair, many soldiers deployed in earlier era in Nagaland (our first insurgency), often had admiration for the tribal ethos and morals.

The second issue is India’s diversity. Many of the United India’s states like say Sindh or Andhra (Panchal Desh) had continuous existence for over 3000 years! The Great Mahabharat war, fought around 1500 BC according to most historical estimates, was a war between two coalitions! The identities of Sindh, Gandhar Desh (modern day Afghanistan), Panchaldesh or Kambujdesh, go back to that era! India’s genius has been that while keeping a unified armed forces, it has given recognition to the ancient identities in the shape of linguistic provinces.

The widely held military view is to lament the creation of linguistic states. Andhra was the first linguistic state created in 1950s. Many shortsighted politicians also felt like wise. The Dhar Commission in its report of December 10, 1948 opposed the formation of states on linguistic basis saying that such a move will not be in the national interest. There were strong reactions against the report from the Telugu speaking regions. Subsequently, the Congress party at its Jaipur conclave accepted the principle of the formation of the states on linguistic lines and constituted a committee comprising Pattabhi Sitaramaiah, Jawaharlal Nehru and Vallabhai Patel to reconsider this important issue of reorganisation states.

The committee in its report of April 1949 recommended that creation of states on linguistic lines be postponed for a few more years. The delay caused unrest among the Telugu speaking people of erstwhile Madras state and their leader Potti Sri Ramulu went on a fast unto death on October 19, 1952 for the creation of a separate Andhra State. His death in the fasting camp on December 15, 1952 led to violence in Andhra region. This made the government to yield to the demand of the agitators and a separate state of Andhra was created on October 1, 1953. Commodre Bhaskar Soman (later chief of the Indian Navy) was at that time was posted at Vizag and his reaction was that while it is a great day for the people of Andhra, it is India that has lost out!

Once the Pandora’s box was opened, state re-organisation on linguistic basis became inevitable. According to this author, it is this step that ensured that India did not go the way of Pakistan or Sri Lanka.

If one takes a look at separatist movements in the country, one will find a common factor. That common factor is that the restive areas are all tied up with other linguistic groups. In Manipur it is the hill people that are being clubbed with the Manipuri speaking Meitei’s, in Darjeeling the Gorkhali speaking people are stuck with the Bengalis. Even in Kashmir, the Kashmiri speakers, Dogri speakers and Ladakhi speakers are lumped together as J&K, an artificial entity that is barely 200 years old. Unrest in these areas can be largely (though not fully, since other factors like religion and ethnicity also come in) understood as a result of stalled process of creation of linguistic states.

But the centralizing tendencies are not confined to military or the bureaucratic, even the judicial institutions have been intrusive and tend to lump the Indian diversity together and impose judicial solutions on people for whom they are irrelevant. Take two examples, the dowry act and issues that plagued the ‘mainland’ some years ago! Did anyone paused to think that the issue in North East was not dowry but ‘bride price’? Or for that matter how a North Indian phenomenon of rapes in moving vehicles led to a ban on simple convenience (and energy saver) like solar films ripped off from all vehicles all over India — even from areas that have not ever seen that mode of rape crimes!

Armed forces officers and men while operating in counter insurgency situation must be mindful and sensitive to these structural issues of the civilizational state that is India.