Inter-Services Synergy: need of the hour 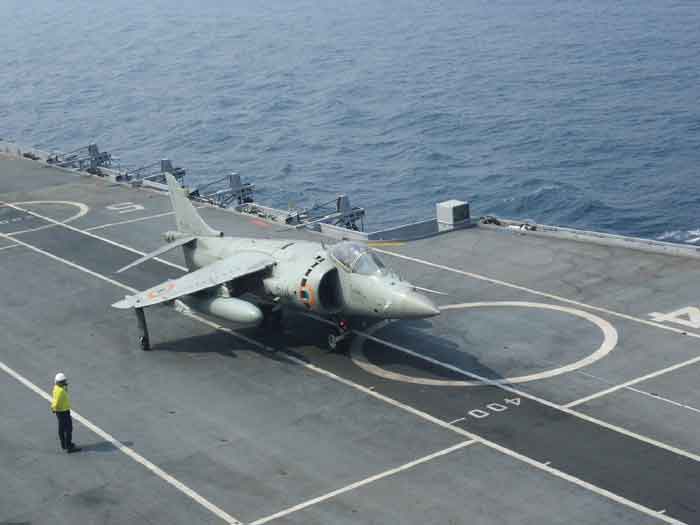 Sea Harrier taking off from the INS Viraat

The Indian Armed Forces have 13 geographically separated commands, five each for the Army and Air Force and three for the Navy and one joint command for the Andaman Nicobar Islands. The A&N, the IDS and the SFC are under the already burdened senior-most Service Chief who dons the rotating hat of the Chairman Chiefs of Staff Committee (COS) with a plateful of administrative and operational responsibility of his own expanding service. The Chief’s own turf per force gets priority at the cost of the other services, as per former COS Chairman Admiral Arun Prakash. Also, the short term for most Chairman COS, poses another impediment to planning.

India’s economy is poised to rise and rank third by 2025, after US and China as per predictions, including those of Dr Montek Singh Ahluwalia, Deputy Chairman – Planning Commission. To safeguard its security, India will have to shed the individual way in which the three premier defence forces and the Coast Guard function. The four Services plan, order, operate and function and prepare for war in compartments and this, despite a large Integrated Defence Staff (IDS) and a separate Strategic Forces Command (SFC), which oversees India’s nuclear assets and plans for India’s retaliatory second strike in India’s ‘No First Use’ policy.

Throughout history, sea power has been a determinant in the rise and fall of powers…

The Indian Armed Forces have 13 geographically separated commands, five each for the Army and Air Force and three for the Navy and one joint command for the Andaman Nicobar Islands. The A&N, the IDS and the SFC are under the already burdened senior-most Service Chief who dons the rotating hat of the Chairman Chiefs of Staff Committee (COS) with a plateful of administrative and operational responsibility of his own expanding service. The Chief’s own turf per force gets priority at the cost of the other services, as per former COS Chairman Admiral Arun Prakash. Also, the short term for most Chairman COS, poses another impediment to planning.

India’s directions for nuclear employment of its forces are written up in the classified ‘Red Book’ and the ‘War Book’ and are exercised under the political nuclear command structure with the National Security Adviser (NSA) as the fulcrum and a National Security Council set up thirteen years ago. The first step in the appointment of a Chief of Defence Staff (CDS) for cohesion and single point of advice to the Government has not been acceptable to the political establishment despite recommendations. The strongest recommendations came in the report of the Arun Singh Committee in the 1990s, and were reinforced by the Kargil Committee Report in 2000 with the experience of the 1999 Kargil War. The report was steered by India’s doyen strategist, Late K Subrahmanyam. No action has been taken and recently in 2012, the matter re-surfaced in the Naresh Chandra Committee which recommended a watered-down post of a permanent Chairman COS at four-star level though the report has not been made public.

Admiral Arun Prakash, a member of the Chandra Committee explained it eloquently. The word ‘CDS’ is anathema to the bureaucratic, political and even the Indian Air Force brass and hence, the Naresh Chandra Committee had taken the half way first step to relieve the current Chairman COS of the many joint service functions. This new four-star incumbent would be provided some teeth to look to inter-service synergy. The next logical step will be to assign ‘roles and missions’ for the three Services and look at the region for ‘security through joint capability’ and synergize procurement with priority of needs. In this century of galloping technology with cyber and space raising challenges to cope with, it needs noting the rising cost of hardware. There is an immediate need to synergize the assets and operations of the three Services, especially the expensive aviation assets as the Navy and Air Force are all going to acquire considerable platforms worth billions of dollars, and some platforms such as MiG-29s, UAVs, LCAs, helicopters and AA systems have commonalities.

In the 21st century, India’s Navy will be very critical for India’s rise, foreign policy, security in war and peace, and her interests in the Indian Ocean…

The establishment owes it to the nation to be prudent and practical. The current aviation and nuclear doctrine of the three Armed Forces is discussed in this article with the rider that India will need an increased share of the defence budget from the current 2.7 per cent of GDP as India is entering the ‘Nuclear Triad Stage’ with ballistic SSBN submarines. India will also need increased sea power to safeguard its wealth and security in the strategic Indian Ocean Region (IOR) and Indo-Pacific where India has economic interests in trade and oil exploration.

Throughout history, sea power has been a determinant in the rise and fall of powers, as elaborated by Robert D Kaplan in his recent writings and more explicitly in his book Monsoon which shows how sea power helped foreign powers from the West to dominate the Indian subcontinent. India, Ceylon, Burma and Malaya were colonised by the British; Indonesia by the Dutch and Philippines by USA in the 18th-19th century with only a handful of soldiers. In earlier times, land forces were a major force in wars for domination and occupation by aggressors who repatriated agricultural and local wealth back home. Then the trend in the last two great wars tilted to the importance of sea and air power. Nuclear power was employed by USA to force Japan in to surrender. China is taking a leaf out of the more recent historical lesson of the rise of Britain, USA and Russia which led to the Cold War. China is beefing up its maritime, nuclear, space and cyber strength. Occupation by adversaries is no longer feasible but disagreements, economic competition for influence over regions, may even lead India and China to enter in to a ‘Cold War’ with skirmishes in the East for resources and freedom of navigation. Hot wars, however, seem unlikely.

History shows how the Western nations came to strategic agreements with control of the Sea Lines of Communications (SLOCs) and choke-points, and achieved sea control. The Cuban missile crisis in 1962 was a good example of the USA’s sea threat to Soviet transport of nuclear missiles to Cuba under a nuclear overhang. Airpower too has risen as the first strike force, and is a critical component of war and for air domination as seen in the two Iraq wars. Warfare is expanding with use of space though no weapons  are allowed in space. The undersea weapon, in the form of the Air Independent Propulsion (AIP) modern submarines with nuclear weapons is for deterrence. With all three component Services possessing nuclear weapons, it forms the nuclear triad which can be costly. All leading navies of the world are three-dimensional, with surface, air and under surface assets and soon space power will be a critical ingredient of operations, communications and intelligence at sea.

The Greeks defined a ‘thalassocratic’ state as a nation with maritime ambitions in military and commercial spheres. Extending this today, ‘sea-power’ encompasses the attributes of geography, population, and a government mandated to maintain a strong navy, a sizeable mercantile fleet and ports with hinterland connectivity. With a large population, India is blessed with an advantageous maritime geography and juts in to the strategic Indian Ocean like a spring board. The Government has realised the importance of ‘sea power’ and has been supportive of India’s small professional Navy with 57,000 officers and men, 112 ships, 13 aging submarines and 150 helicopters and aircraft which guard 7,300 km of coastline and 2.1 sq.km. of EEZ and many islands. The IN has 44 ships and 70 aircraft and helicopters on order. The Indian Coast Guard with 45 aircraft and helicopters, and 75 vessels has the responsibility to look after coastal security, EEZ and 4.1 sq.km. as its Search and Rescue (SAR) area with an ambitious expansion plan. In the 21st century, India’s Navy will be very critical for India’s rise, foreign policy, security in war and peace, and her interests in the Indian Ocean. In September 1965, in the seventeen-day war with Pakistan, the Indian Air Force was called in only when the Army was corralled in the Chhamb sector.

The IAF under Air Marshal Arjan Singh responded magnificently. Very few know that, in the war, the Cabinet passed a resolution that the Indian Navy warships should not operate beyond the Porbander latitude (22 degrees) and should not take on the Pakistan Navy unless attacked. This was conveyed by a note signed by Joint Secretary H C Sarin to the Chief of Naval Staff Admiral Bhaskar Soman who protested but Defence Minister Y B Chavan merely initialed the file. Pakistan’s Destroyer squadron led Khaibar under Captain Hanif came off Dwarka and shelled the beach with 4.7 inch guns, to replicate Mahmud Ghaznavi’s foray (1024 AD) when he sacked the temple and is reported to have personally hammered the temple’s gilded Lingam to pieces and the stone fragments were carted back to Ghazni. Only a cow was killed and the destroyers fled back. That is the day Admiral S M Nanda wowed that the Navy would not be found wanting if war came. He kept his promise.

The Indian Navy came of age in the 1971 War. Credit must go to Navy Chief Admiral SM Nanda who boldly planned and attacked Karachi by ingeniously getting three newly acquired Russian Osa Class boats with Styx missiles and towed them to Porbander, then refueled en route by Poshak, a Bombay Dockyard oiler per-positioned there. By happenstance, four OCU IAF Hunters under Wing Cdr Don Conquest from Jamnagar set fire to the Kemari oil tanks on the morning of December 04 and the missile boats sunk three ships off Karachi that night. December 04 is annually celebrated as Navy Day and the Missile Boats are called ‘The Killers’. The synergized morning attack by IAF and the night attack by the Navy demoralised the Pakistan Navy in the opening bell of the war. In the East in the 1971 War, the 18,000-tonne aircraft carrier INS Vikrant with Sea Hawk fighters and Breguet Alize aircraft played a stellar role to bomb runways and attack river sites with the IAF to dominate the skies and liberate Bangladesh. Both 1965 and 1971 Wars need studying for future synergetic operations.