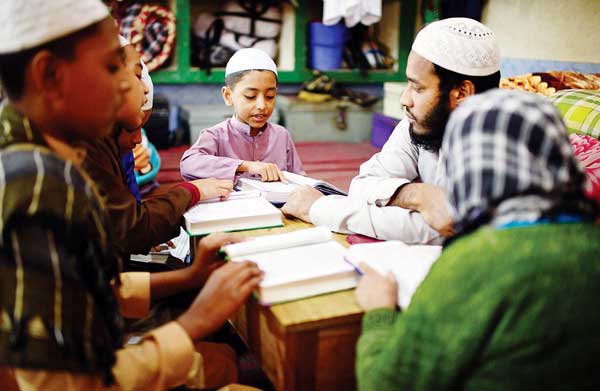 It is no secret that the deep state of Middle East and the West were behind the installation of Mohamed Morsi as President of Egypt following the Egyptian Revolution in 2011. Morsi led the ‘Freedom and Justice Party’ launched by the radical Sunni-islamists outfit ‘Muslim Brotherhood’, which latter described as having the same mission and goals but different roles than the Brotherhood. However, mass demonstrations throughout Egypt by millions of Egyptians and clashes began on June 30, 2013 to denounce Mohamed Morsi.

The Egyptian Army led by Army Chief General Abdel Fattah el-Sisi issued a 48-hour ultimatum giving political parties until July 3 to meet demands of the anti-Morsi demonstrators and threatened to intervene if the dispute was not resolved by then. With no resolution, the army overthrew Morsi in a coup d’état on July 3 and installed an interim head of state till a new president could be elected. Morsi and many members of Muslim Brotherhood were arrested for inciting violence.

On July 24, 2013, Sisi addressing a military parade said that the mass public demonstrations granted the Egyptian military and the police a “mandate” to crack down on terrorism. Thereafter, Egypt witnessed the well known ‘Tamarod Movement’ rejecting the Muslim Brotherhood.

It is ironical that Recap Tayyip Erdogan heading Turkey presently dreams of an Islamist Caliphate of his own, and Turkey in connivance Pakistan could turn nuclear next as US attention is riveted elsewhere.

Sisi is President of Egypt since June 8, 2014. His approach to the fundamentalists was quite simple. He summoned the radical leaders and clerics and told them that neither one billion plus Muslims of the world can kill the balance six billion plus non-Muslims, nor the opposite is feasible; therefore radical Islam must rethink and shun terrorism. Not only did he go after the Muslim Brotherhood, he shut down many mosques, madrassas, seminaries and offices of radical organizations  that were breeding radical thought and terrorism. This illustration confirms the following: one, terrorism does not have a religion, but radical Islamists terrorism exists, and; two, not all but some mosques, madrassas and seminaries do breed terrorism because of radical teachings, in addition to radical organizations  focused specifically towards this.

In next door Pakistan, what would be the present state of radicalization can be gauged from what Pervez Amirali Hoodbhoy, nuclear physicist and professor at Quaid-e-Azam University, wrote more than a decade back, in 2008 saying, “The promotion of militarism in Pakistan’s schools, colleges and universities has had a profound effect on young people. Militant jihad has become a part of the culture in college and university campuses, with armed groups inviting students for jihad in Kashmir and Afghanistan. The immediate future of Pakistan looks grim, as increasing numbers of mullahs are creating cults around themselves and seizing control over the minds of their worshippers. It may yet be possible to roll back the Islamist laws and institutions that have corroded Pakistani society for over 30 years, and defeat the ‘holy’ warriors. However, this can only happen if Pakistan’s elected leaders acquire the trust of the citizens. To do this, political parties, government officials and, yes, even generals will have to embrace democracy, in both word and deed.”

To add to what Hoodbhoy wrote in 2008, an article titled ‘A Monstrous Experiment in the Daily Times of Pakistan on May 11, 2009 read,  “There are thousands of madrasas spread all over Pakistan’s urban centres that are producing millions of neo-drones …Take a little boy and incarcerate him in a remote madrasa. Indoctrinate him with a distorted version of a religion and tell him that he does not belong to this world. Teach him about the fanciful world that awaits him in the heaven, and that in order to attain that he has to destroy everything that stands in his way, including his own body…… At full steam ahead in Pakistan, this is a monstrous experiment in brainwashing and it is on a par with, if not worse than, Nazi Germany’s eugenics. They did it in the name of science; here, it is being done in the name of God and religion. On a very large scale, this is a hugely successful experiment in which nurture triumphs and nature takes a beating”.

The process of radicalization that Zia ul-Haq, heading Pakistan, ushered in 1978 has reached unimaginable gargantuan proportions, making Pakistan the epicenter of global terrorism, further spread of which is being coordinated, overseen and executed by the Pakistani army whose sole achievement is promotion of terrorism. That is why former US defense secretary James Mattis has said he considers Pakistan as the “most dangerous country” he dealt with it in a long career spanning decades in the military and as a member of President Donald Trump’s cabinet, because of the level of radicalization of its society and its nuclear weapons.

Pakistan has been playing the charade of mainstreaming the madrassas education and clamping down on terrorism only to dupe the world, particularly the FATF for fear of being blacklisted. However, the reverse is happening. What further proof is required that concurrent to India declaring Masood Azhar, Hafiz Saeed, Dawood Ibrahim and some others ‘terrorists’ under the UAPA Act, Pakistan has secretly released Masood Azhar, JeM chief and UN-designated global terrorist, from prison despite his involvement in multiple terror attacks in India including J&K Assembly and Indian Parliament (2001), IAF Base Pathankot (2016), BSF Camp Srinagar (2017), Sunjwan Army Camp (2018), Pulwama car-bombing (2019) and many more.

In pursuance of its nefarious designs to grab Kashmir, Pakistan executed a deliberate plan to radicalize youth of the Valley, giving it a religious hue. The massacre, rape and ethnic cleansing of Kashmiri Pundits from J&K was done on this plank in connivance some J&K politicians, separatists, clerics and jihadist organizations.

The benign and secular Sufi culture of J&K was strangulated. Sufi-cultured clerics of mosques were systematically replaced by hardcore Wahabi-Sunni clerics that would promote radical thought. Not only were select madrassas used to breed hatred, textbooks in some schools by default or design taught hatred towards non-Muslims. Latter was in connivance J&K politicians, education being state subject, who also posted teachers with radical thought in specific slots.

India is also the target of global terrorist organizations like the ISIS and AQIS who both aim for a Muslim world ruled by radical Islamists. Their aim all along has been to radicalize youth through madrassas, seminaries and mosques following the hardcore Wahabi-Salafi culture not only in J&K but pan-India. In 1990, a paper sent up by the Army in Srinagar had warned that there were some 700 mosques in the region that were spewing anti-India venom daily through loudspeakers and if madrassas are not integrated into education system of the country, there would be trouble.

Ironically, no cognizance was taken even as much before when TV came to India, burning of the Tricolour could be seen during a India-Pakistan cricket match in Srinagar.

Madrassasspread all over India number few lakhs – five lakhs by one estimate in 2016. These have come up because there are no schools in villages, lack of government schools and private schools in vicinity (if at all) are expensive. The important fact is that madrassa education is informal and the focus of teaching being religion, it divests students from modern education essential for all round growth, development as a citizen of the country and successfully pursuing advanced studies to face the world.

In this context, Minority Affairs Minister Mukhtar Abbas Naqvi had told media in June 2019 that the government has initiated significant steps towards modernization of madrasssa education linking it with formal education. The program to be rolled out in July 2019 with training of teachers of such informal institutes of Muslims, was to include:

•  Ensure that students coming out of madrassas get formal and higher education in institutes like Jamia Millia Islamia and Delhi University.

•  For formal education of madrassa teachers, madrassas themselves will be asked to identify the teachers for this.

•  Madrassas teacher training to start in July 2019 (one-month course), with efforts to train at least 200 teachers from all over the country

•  Government will help students coming out of madrassas with a ‘bridge course’ to enable them get formal degrees.

•  Jamia Milia has been contacted for the ‘bridge course’ and Delhi University and more such institutes were being contacted.

•  In madrassas, government wants to introduce formal education in form of subjects like English, Hindi, Science, Maths and Computer Sciences besides others.

Nothing has been heard beyond the above announcement by Naqvi albeit the first phase of training 200 madrassa teachers is perhaps underway. Of importance is the radicalization that Pakistan has already achieved in J&K, particularly in South Kashmir, and its stated pronouncement that it would go to any length after Article 370 was revoked.

Considering the quantum of the first phase mentioned above and holistic integration of over five lakh madrassas into formal education, the task is gigantic and would naturally take a number of years, if not decades. But considering what is happening in the Valley, J&K requires to be given special focus and priority one for such integration.

In no way should integration of madrassas into formal education be  viewed as anti-Islam though some radicals, including politicians, would like to portray it as  ‘saffronization’ of madrasssa. Such integration would not undermine religion in any manner. Convent Schools make teachers and students go to church, sing hymns and so on.

Madrassas can do similarly while imparting formal education as other schools are doing. Government should actually be working on a more dynamic plan by bringing the madrassas themselves within the ambit of CBSC, CISC and so on. The overall accreditation should be common on the same lines for all schools – like in the Khalsa, Santan Dharam, DAV and Convent schools. This would also contribute towards holistic integration of youth of the country.

One thought on “Integrating Madrassa Education”