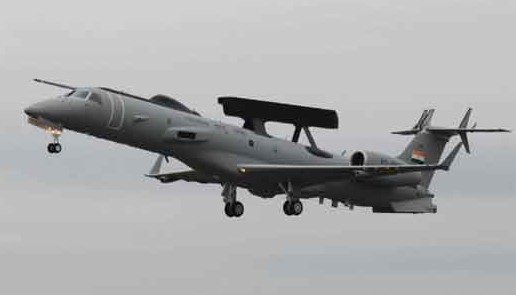 Events such as the Purulia arms drop, use of hijacked airliners as a lethal arm of terrorism, disappearance of a civil airliner from the radar screen and proliferation of tactical and intermediate range ballistic missiles across our western and northern borders, are pointers for us to take a holistic look at our air defence capabilities. To address these issues, which are essentially of peacetime policing, steps have been initiated for closer integration of surveillance and regulatory activities by diverse agencies such as DGCA, AAI and other Services, with the IAF. The indigenously developed IACCS, wherein data provided by all these agencies will be synthesized and analysed to minimise detection-to-interception time, by the most optimum means, is in place in the sensitive areas. Importantly, the IACCS, with new radars, will also bring AD coverage to the Southern peninsula. However, the detection of missiles, possibly armed with weapons of mass destruction, has not yet been adequately addressed.

India is a large sub-continent with about 33,00,000 sq. km. of territory, land frontiers running over 15,000 km and a coastline of over 7000 km. The national airspace hence, spans a much larger sphere and is estimated to be about over 40 million cu. km. India also sits across vital inter-continental air traffic routes. With a rapidly growing economy the recorded growth of the last few years notwithstanding, India is an important player in the region and the world. Its geographical location with its island territories, places it at a strategic point to keep an eye on some important maritime trade routes that traverse through the Persian Gulf, Arabian Sea, Indian Ocean and the Bay of Bengal. Inadequate surveillance and air defence capabilities present serious complexities in the air defence and airspace management of such a large area, which has ever-hostile borders and an increasing density of air traffic.

The infamous Purulia arms-drop incident of 1995, wherein an aircraft apparently on a routine over-flight used the Indian airspace for an unauthorised arms drop, highlighted the weakness in our surveillance and reporting system. A few years later in 1998, India had the dubious reputation of not detecting an enemy aircraft, which had intruded deep into its airspace nearly up to the airfield at Bhuj in Gujarat. That the Indian Air Force (IAF) finally succeeded in shooting it down by surface-to-air missiles is another story. The IAF, however, redeemed its reputation just after the Kargil episode, when its fighter aircraft shot down a PAF surveillance aircraft in the same area, with excellent coordination between ground control and the aircraft. The 9/11 incident in the US, the mysterious disappearance of the Malaysian Airlines Flight MH 370 a few months ago and the downing of another Malaysian Airlines Flight MH 17 over Ukraine, have added a new dimension to the problem of air defence and airspace management.

Every country takes prudent measures to ensure safety and security of its land frontiers as well as its airspace. Additionally, nations regulate and provide proper and safe services on air traffic routes within their airspace. Hence, infrastructure has to be in place to ensure that similar incidents, be they of 1995 vintage or the more recent ones of 2001 or 2014, do not recur in Indian airspace.

To create an environment of effective Air Defence, one must rely on the fundamentals of defensive action…

For reasons mentioned earlier, there is an accepted need for instituting efficient and extended airspace management. This is not only for the requirement of air traffic management, but also to safeguard India’s strategic security interests, to institute proper air-space surveillance, to promulgate and enforce appropriate Air Defence Identification Zones (ADIZs) and to monitor, regulate and control air traffic over the entire Indian airspace. Airspace management is, therefore, a combination of air defence measures implemented by the IAF with the assistance of Army and Navy in certain areas and Air Traffic Services (ATS), provided by the Airports Authority of India (AAI), the IAF and to a limited extent by Hindustan Aeronautics Limited (HAL), the Indian Army and the Indian Navy. Airspace management encompasses the following:

Regulatory functions which include promulgation of ADIZs, Flight Information Regions (FIRs), air routes and reporting points along with relevant aeronautical information and rules and laws of the air.

Surveillance of the entire airspace at low, medium and high altitudes by surveillance radars, both military and civil.

Control mechanism for enforcing sanctity of airspace, monitoring surveillance information, enforcing ADIZs through technical, military and administrative measures in addition to the regulatory measures mentioned above.

Weapon Systems and Interceptors to deter, intercept, and if the need arises, destroy intruders in Indian airspace, or other such aircraft that do not adhere to the regulations.

Air Traffic Control which involves monitoring and control of air traffic in Air Routes, controlled areas, approach and departure and in the aerodrome zones.

The IAF and to some extent the AAI, are entrusted with the responsibility of the management of the entire Indian airspace. Military enforcement of ADIZs is solely the responsibility of the IAF and the task is executed through a chain of radars as well as a Command, Control, Communications and Intelligence (C3I) organisation. Aircraft and surface-to-air missiles of the IAF, with elements of the Army and the Navy participating in their specific areas, where required, carry out interceptions. Civil aviation authorities, in conjunction with the IAF, also assist in this process by ensuring regulatory and control measures, such as assignment of Air Defence Clearance (ADC) numbers to aircraft entering or operating in Indian air space and by confirming the ADC of the incoming traffic, where necessary.

To create an environment of effective Air Defence, one must rely on the fundamentals of defensive action that includes detection of intrusion by enemy forces and appropriate reaction by own forces and then apply them to the airspace. To respond to the double restraint of early detection and quick reaction, the defensive must have in place an early warning network and reaction procedures clearly stipulated.

India is plagued by an unstable neighbourhood that dictates the necessity to have a credible and a deterrent air defence capability in place, both peace and war time. The volatility of the neighbourhood also implies that conflict situations can develop rapidly. The IAF possesses capable enough air defence mechanisms, which have been called into enhanced states of readiness at short notice, several times in the past, be it for an airspace violation by an adversary nation or the straying of a civil aircraft from its designated route. Even so, no air defence system can be foolproof and impermeable. Because of this, we must ensure that the risk for the intruders or for aircraft wishing to deviate from their flight plans, willingly or inadvertently, to undertake a hostile/nefarious activity, is extreme for it to be a deterrent. Appropriate and effective surveillance, radar integration, command, control and communications, information flow, procedures and responsibilities, rules of engagement, weapon systems, alert status and delegation of authority, are needed to further the credibility and deterrent value of the air defences and airspace management.

Surveillance Capability of the IAF

As enshrined in the Union War Book, the sole responsibility of the country’s Air Defence (AD) rests with the IAF. For this purpose, the IAF has a large number of high, medium and low-level radars integrated into an efficient AD system. The coverage of the entire Indian airspace at high level is extensive with near-complete high-level cover even in the Southern Peninsula. Towards the North, over some parts of Tibet, radar cover is available only at high altitude.

At medium levels of above 10,000 ft, there is adequate coverage along the borders. However, radar cover over Tibet and Myanmar is negligible. Only single-tier low-level radar cover (60 km depth) exists along the Western border with a two-tier radar cover in some important areas. There is practically no low-level radar cover in the entire peninsular region, neither does an adequate overlap exist between low, medium and high levels of radar coverage. While the Air Defence Ground Environment System (ADGES) has ensured some degree of integration, indigenous real-time integration planned by the IAF, is still underway. In-principle approval for the multi-crore project for real-time integration of radars in the North and West of the country was accorded some time ago. This was as a part of an overall multi-phased radar induction and integration, covering the entire Indian airspace. In addition, a study for the integration of radars in the Southern zone was also ordered but progress has been slow.