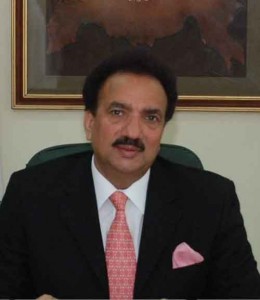 If NaMo, the Chief Minister of Gujarat, had been well-advised, instead of raising the issue of Sir Creek, he would have raised the insensitive timing of the official visit of Mr. Rehman Malik, the Interior Minister of Pakistan, to India at the invitation of Shri Shushil Kumar Shinde, our Home Minister. His visit is scheduled to take place from December 14,2012,a day after the 11th anniversary of the attack on the Indian Parliament by Pakistan-sponsored jihadi terrorists on December 13,2001. This is not only an insult to the memory of the security forces personnel who were killed during the attack, but a reminder of the embarrassing fact that 40 years after Pakistan’s Inter-Services Intelligence (ISI) started using sponsored-terrorism against India, we are still without an effective answer to it.

ISI officers will see in the timing of the visit a confirmation of their belief that India does not have the will to fight their use of terrorism against us.

One can’t have an objection to Mr.Malik being invited to India to launch the new visa liberalisation measures, but this was not the time to do so. ISI officers will see in the timing of the visit a confirmation of their belief that India does not have the will to fight their use of terrorism against us.

Pakistan will try to project that with the execution of Ajmal Kasab, the Pakistani  terrorist of the Lashkar-e-Toiba (LET),  and its seeming pursuit of the trial against the main Pakistan-based conspirators of the 26/11 terrorist strikes, the terrorism chapter in Indo-Pakistan relations is about to be over and a new chapter can begin.

It is important to make it clear to Mr.Malik and other Pakistani leaders as well as to the international community that our battle against Pakistan-sponsored terrorism will continue so long as Pakistan does not act against all terrorists operating from sanctuaries in Pakistan and does not wind up the anti-India terrorist infrastructure in Pakistani territory.

Since March 1993,the ISI has been responsible for a series of mass fatality terrorism against us. The attack on our Parliament in 2001 and the 26/11 strikes in Mumbai were acts of indirect aggression against India as per some resolutions of the UN General Assembly passed on the question of state-sponsored terrorism. All these attacks against our nationals, interests and sense of honour have remained without an appropriate response from our Government and political leadership.

All these attacks against our nationals, interests and sense of honour have remained without an appropriate response from our Government and political leadership

The 26/11 strikes were qualitatively different and graver than the other acts sponsored by the ISI in Indian territory. For the first time in the history of Pakistan-sponsored terrorism, foreign nationals—including Americans and Israelis—were targeted and brutally killed. It was an attack not only on India, but also on the international community.

Any self-respecting nation would have seen that Pakistan paid an appropriate price for the attack. The relatives of the foreign nationals killed should have been mobilised to pursue the senior officers of the ISI before courts of their countries for their involvement. We not only failed to retaliate against the terrorist leaders in Pakistan, but also failed to mobilise the relatives of the foreign victims.

I do not have the confidence that Dr.Manmohan Singh and Shri Shinde will vigorously articulate our position to Mr.Malik

I am all for good relations with Pakistan. Even Indira Gandhi, Rajiv Gandhi, Narasimha Rao and Atal Behari Vajpayee sought good relations. But good relations do not mean letting Pakistan get away with its use of terrorism against us.

Our battle against Pakistan-sponsored terrorism began in 1981.It has to continue without closure till we ultimately prevail. It has to be made clear to Mr.Malik that there will be no closure till terrorism originating from Pakistan ends.

I do not have the confidence that Dr.Manmohan Singh and Shri Shinde will vigorously articulate our position to Mr.Malik. Mrs.Sonia Gandhi and Shri Rahul Gandhi do not understand the anger on this issue in the hearts and minds of innumerable Indians. This has to be done by the opposition leaders and the public. Let this be raised loud and clear during the remaining two days of the election campaign in Gujarat.