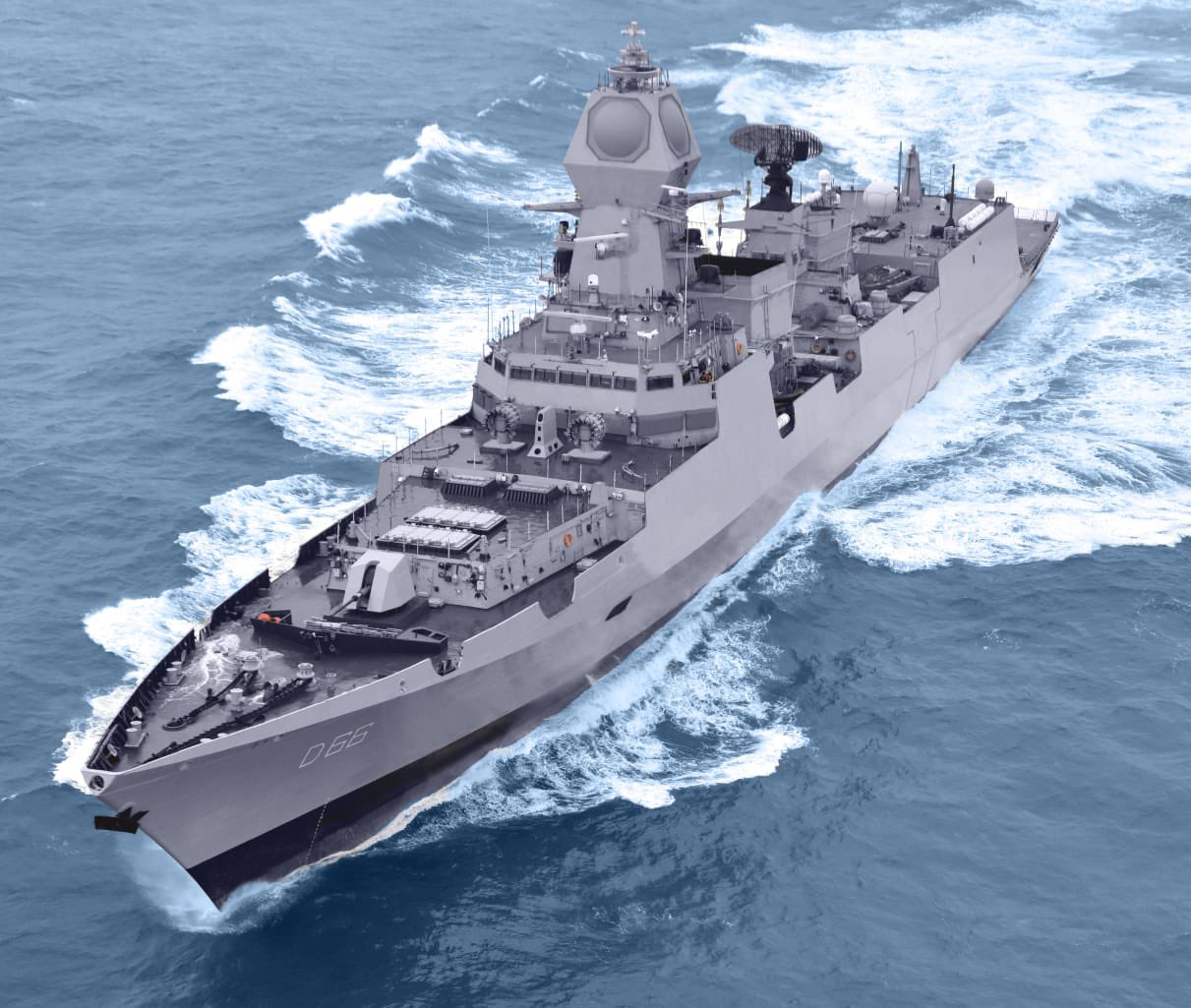 INS Visakhapatnam, a P15B stealth guided missile destroyer, was commissioned into the Indian Navy in the presence of Raksha Mantri Rajnath Singh at the Naval Dockyard, Mumbai on November 21, 2021. The event marks the formal induction of the first of the four ‘Visakhapatnam’ class destroyers, indigenously designed by the Indian Navy’s in-house organisation Directorate of Naval Design and constructed by Mazagon Dock Shipbuilders Limited, Mumbai.

In his address, the Raksha Mantri termed INS Visakhapatnam as a symbol of the growing maritime prowess of the country and a major milestone in achieving Prime Minister Narendra Modi’s vision of ‘Make in India, Make for the World’. He added that the ship is a reminder of ancient and medieval India’s maritime power, shipbuilding skills and glorious history. Rajnath Singh exuded confidence that the state-of-the-art ship, equipped with latest systems and weapons, will strengthen the maritime security and protect the interests of the Nation. He defined the ship as one of the most technologically advanced guided missile destroyers in the world which will cater to the present & future requirements of the Armed Forces and the Nation as a whole.

Rajnath Singh appreciated the self-reliance efforts of the Indian Navy, terming Navy’s order of 39 of the 41 ships and submarines from Indian shipyards as a testament to their commitment towards achieving ‘Aatmanirbhar Bharat’. He described the development of Indigenous Aircraft Carrier ‘INS Vikrant’ as an important milestone in their path to achieve ‘Aatmanirbharta’. “The carrier will increase our reach from the Indian Ocean to the Pacific and Atlantic Ocean. Its commissioning will be a golden moment in the history of the Indian Defence. It will be the best occasion to celebrate the 75th anniversary of India’s independence and the 50th anniversary of India’s victory in 1971 war,” he said.

Saying that global security reasons, border disputes and maritime dominance have forced countries to move towards strengthening their military power, Rajnath Singh exhorted the public & private sector to take advantage of Government’s policies, work together and make India an indigenous shipbuilding hub. He listed out a number of reforms undertaken by the Government through which the public and private sector companies can make their mark in the international market. The steps include simplification of licensing process; speeding up Acceptance of Necessity (AoN) & Request for Proposal (RFP) process; setting up of Defence Industrial Corridors in Uttar Pradesh & Tamil Nadu; positive indigenous lists of over 200 items; Defence Acquisition Procedure 2020 and earmarking around 64 per cent of its modernisation funds under capital acquisition budget for 2021-2022 for procurement from domestic companies.

The Raksha Mantri emphasised on the need to keep the Indo-Pacific region open, safe and secure, terming it as the primary objective of the Indian Navy. He asserted that India’s interests are directly linked with the Indian Ocean and the region is crucial for the world economy. “Challenges such as piracy, terrorism, illegal smuggling of arms and narcotics, human trafficking, illegal fishing and damage to the environment are equally responsible for affecting the maritime domain. Therefore, the role of the Indian Navy becomes very important in the entire Indo-Pacific region,” he added. The Raksha Mantri underscored the importance of a rule-based freedom of navigation and security of sea lanes in the present era of globalisation to ensure stability, economic progress and development of the world.

Rajnath Singh reiterated that India, as a responsible maritime stakeholder, is a supporter of consensus-based principles and a peaceful, open, rule-based and stable maritime order. “In the ‘United Nations Convention on the Law of the Sea’ (UNCLOS) of 1982, territorial waters of nations, exclusive economic zones and the principle of ‘Good order at sea’ have been propounded. Some irresponsible nations, for the sake of their narrow partisan interests, keep on giving new and inappropriate interpretations to these international laws from hegemonic tendencies. The arbitrary interpretations create obstacles in the path of a rule-based maritime order. We envision a rule-based Indo-Pacific, with freedom of navigation, free trade and universal values, in which the interests of all the participating countries are protected,” he said.

The Raksha Mantri lauded the Indian Navy for taking forward the Prime Minister’s vision of SAGAR (Security and Growth for All in the Region) with the spirit of friendship, openness, dialogue and co-existence with the neighbours.

INS Visakhapatnam measures 163m in length, 17m in breadth with a displacement of 7,400 tonnes and can rightfully be regarded as one of the most potent warships to have been constructed in India. The ship is propelled by four powerful Gas Turbines, in a Combined Gas and Gas (COGAG) configuration, capable of achieving speeds in excess of 30 knots. The ship has enhanced stealth features resulting in a reduced Radar Cross Section (RCS) achieved through efficient shaping of hull, full beam superstructure design, plated masts and use of radar transparent materials on exposed decks.

The ship is packed with sophisticated state-of-the-art weapons and sensors such as Surface-to-Surface missile and Surface-to-Air missiles. It is fitted with a modern surveillance radar which provides target data to the gunnery weapon systems of the ship. The anti-submarine warfare capabilities are provided by the indigenously developed rocket launchers, torpedo launchers and ASW helicopters. The ship is equipped to fight under Nuclear, Biological and Chemical (NBC) warfare conditions.

Named after the historic city of Andhra Pradesh on the east coast, Visakhapatnam, the ‘City of Destiny’, the ship has a total complement of about 315 personnel. Enhanced crew comfort is a significant feature of INS Visakhapatnam, which has been ensured through ergonomically designed accommodation based on ‘modular’ concepts. The ship will be under the command of Captain Birendra Singh Bains, a Navigation & Direction specialist.

With the changing power dynamics in the Indian Ocean Region, INS Visakhapatnam will augment the Indian Navy’s mobility, reach and flexibility towards accomplishment of its tasks and goals. 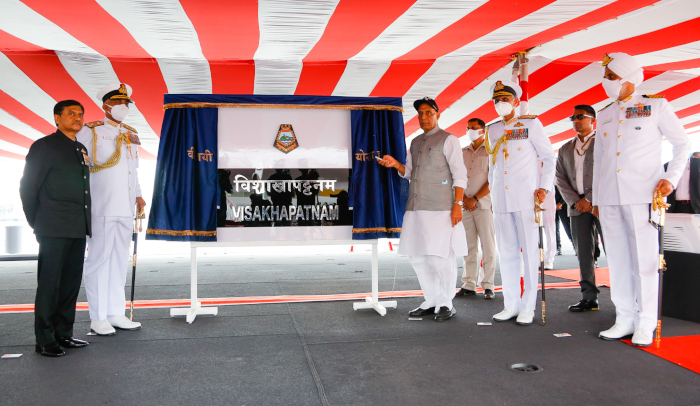