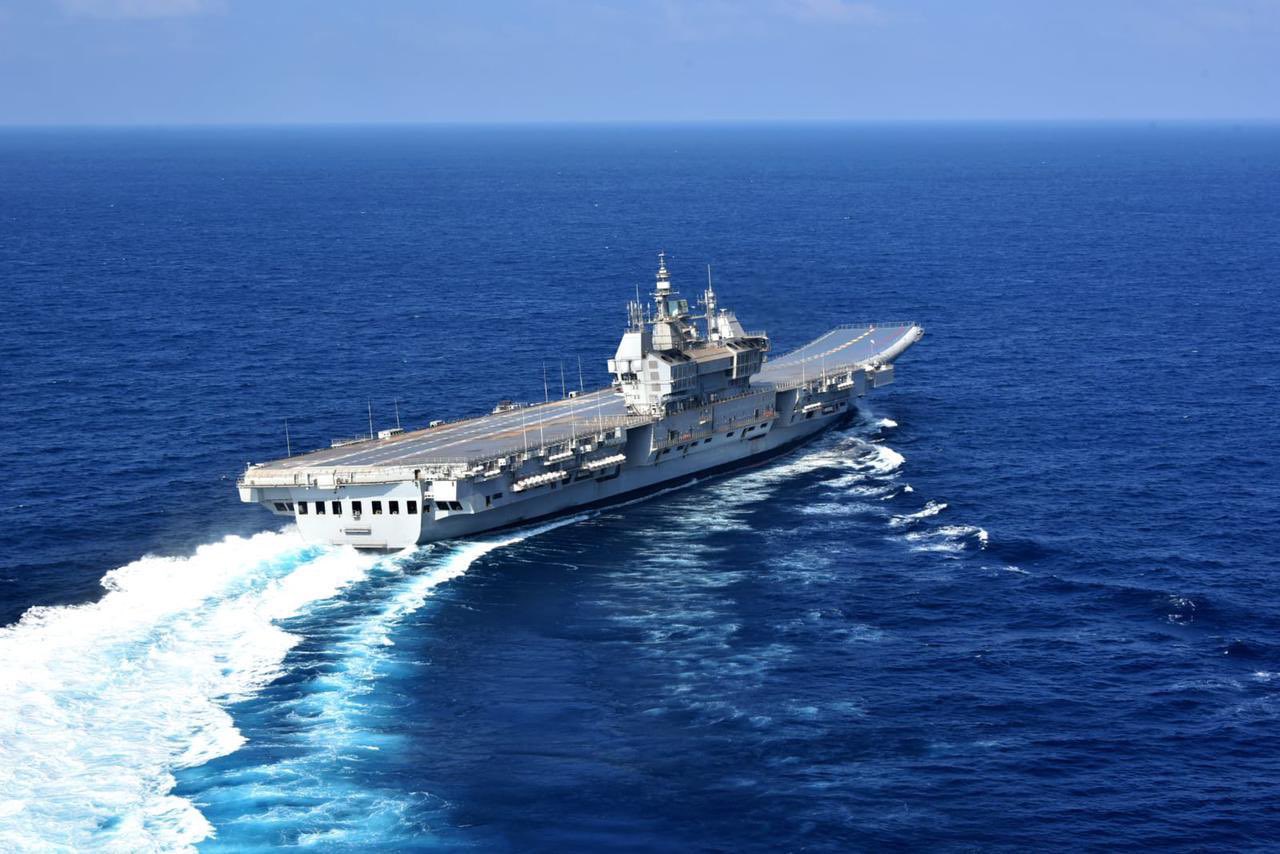 INS Vikrant is designed by Indian Navy’s in-house Warship Design Bureau (WDB) and built by Cochin Shipyard Limited, a Public Sector Shipyard under the Ministry of Ports, Shipping & Waterways, Vikrant has been built with with state of the art automation features and is the largest ship ever built in maritime history of India.

The Indigenous Aircraft Carrier is named after her illustrious predecessor, India’s first Aircraft Carrier which had played a vital role in the 1971 war. It has a large number of indigenous equipment and machinery, involving major industrial houses in the country as well as over 100 MSMEs. With the commissioning of Vikrant, India will have two operational Aircraft Carriers, which will bolster the maritime security of the nation.

During the event, the Prime Minister also unveiled the new Naval Ensign (Nishaan), doing away with the colonial past and befitting the rich Indian maritime heritage.

Prime Minister Narendra Modi commissioned the first indigenous aircraft carrier as INS Vikrant today. During the event, the Prime Minister also unveiled the new Naval Ensign (Nishaan), doing away with the colonial past and befitting the rich Indian maritime heritage.

Addressing the gathering, the Prime Minister said today, here on the coast of Kerala, India, every Indian, is witnessing the sunrise of a new future. This event being held on the INS Vikrant is a tribute to the rising spirits of India on the world horizon. He said that today we are seeing a manifestation of the dream of the freedom fighters where they envisioned a capable and strong India. The Prime Minister exclaimed “Vikrant is huge, massive, and vast. Vikrant is distinguished, Vikrant is also special. Vikrant is not just a warship. This is a testament to the hard work, talent, influence and commitment of India in the 21st century. If the goals are distant, the journeys are long, the ocean and the challenges are endless – then India’s answer is Vikrant. The incomparable Amrit of Azadi ka Amrit Mahotsav is Vikrant. Vikrant is a unique reflection of India becoming self-reliant.”

Commenting on the new mood of the nation, the Prime Minister said , no challenge is too difficult for today’s India. He said “today, India has joined those countries in the world, which manufacture such a huge aircraft carrier with indigenous technology. Today INS Vikrant has filled the country with a new confidence, and has created a new confidence in the country.” The Prime Minister acknowledged and praised the contribution of the Navy, engineers of Cochin Shipyard, scientists and specially the workers who worked on the project. He also noted the happy and auspicious occasion of Onam that is adding even more happiness to the occasion.

“INS Vikrant is not just a warship. This is a testament to the hard work, talent, influence and commitment of 21st century India”

Every part of INS Vikrant has its own merits, a strength, a development journey of its own. It is a symbol of indigenous potential, indigenous resources and indigenous skills. The steel installed in its airbase is also indigenous, developed by DRDO scientists and produced by Indian companies, he said. Explaining the massive proportions of the Carrier, the Prime Minister said it is like a floating city. It produces electricity that is sufficient to power 5000 households and the wiring used will reach Kashi from Kochi, he said. He said that INS Vikrant is a living embodiment of the Spirit of the Panch Prans that he proclaimed from the ramparts of Red Fort.

The Prime Minister talked about the Indian Maritime tradition and naval capabilities. Chhatrapati Veer Shivaji Maharaj, he said, built such a navy on the strength of this sea power, which kept the enemies on their toes. When the British came to India, they used to be intimidated by the power of Indian ships and trade through them. So they decided to break the back of India’s maritime power. History is witness to how strict restrictions were imposed on Indian ships and merchants by enacting a law in the British Parliament at that time, the Prime Minister said.

“INS Vikrant is a unique reflection of India becoming self-reliant”

The Prime Minister noted that today on the historic date of September 2, 2022, India has taken off a trace of slavery, a burden of slavery. The Indian Navy has got a new flag from today. Till now the identity of slavery remained on the flag of Indian Navy. But from today onwards, inspired by Chhatrapati Shivaji, the new Navy flag will fly in the sea and in the sky.

The Prime Minister remarked that when Vikrant descends to protect our maritime zone, many women soldiers of the Navy will also be stationed there. With the immense power of the ocean, boundless female power, it is becoming the lofty identity of the new India. Now the Indian Navy has decided to open all its branches for women. The restrictions that were there are now being removed. Just as there are no boundaries for the capable waves, there will be no boundaries or restrictions for the daughters of India.

The Prime Minister said drop by drop water becomes like a vast ocean. He also mentioned the salute by indigenous canon on this Independence Day. Similarly, if every citizen of India starts living the mantra of ‘Vocal for Local’, then it will not take long for the country to become self-reliant.

Commenting on the changing geo-strategic situation, he said in the past, security concerns in the Indo-Pacific region and the Indian Ocean have long been ignored. But, today this area is a major defence priority of the country for us. That is why we are working in every direction, from increasing the budget for the Navy to increasing its capability, he said. The Prime Minister said that a strong India will pave the way for a peaceful and safe world.