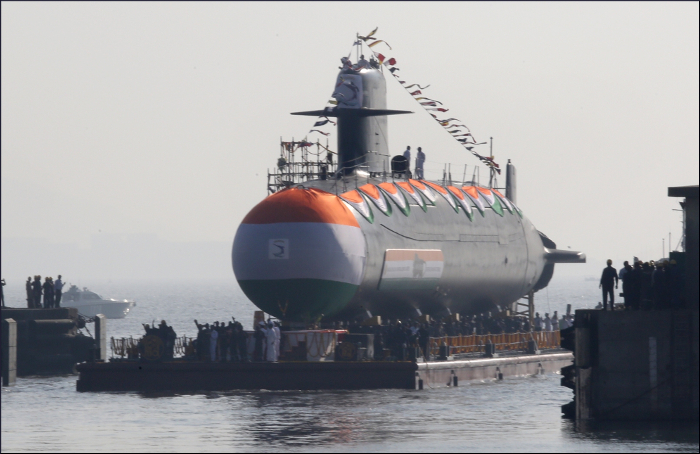 The jewel in the crown in the modernisation of MDL is the new Submarine Assembly shop, a sprawling 10,000-square metre facility, which, in one go, will enable MDL to undertake concurrent construction of two submarine production lines, adding up to 12 submarines under various stages of construction at any given point of time. This is going to be a very major enhancement in capacity, to build futuristic strategic assets, necessary for India to realise its dream of becoming a credible regional and a global power especially on the high seas.

With the commissioning of the first indigenously-built submarine, INS Shalki on February 07, 1992, India became a part of the exclusive group of submarine constructing nations. It was indeed a historic moment for Mazagon Dock Shipbuilders Ltd. (MDL), who had built this submarine. MDL then went on to commission another submarine, INS Shankul, on May 28, 1994. That these submarines are still in service today, after more than 20 years, is a matter of pride.

In the ongoing project of series construction of six Scorpene class submarines, Khanderi, the second one was launched by MDL at Mumbai on January 12, 2017. This submarine has superior stealth characteristics and has the ability to launch a crippling attack with torpedoes as well as tube-launched anti-ship missiles whilst underwater or on surface.

The Union Minister of State for Defence, Subhash Bhamre, presided over the function to initiate the launch of Khanderi (Yard 11876). The submarine was launched in keeping with the age old tradition of launching of the ships by a lady and thus, Khanderi was launched by the Union Minister’s wife, Mrs Bina Bhamre. It is pertinent to mention that the series construction of six submarines makes the Scorpene Project one of the largest such projects globally.

The Scorpène-class submarines are diesel-electric attack submarines jointly developed by the French Direction des Constructions Navales (DCN) and the Spanish company Navantia, and now by DCNS. It features diesel propulsion and an additional Air-Independent Propulsion (AIP). The French Module d’Energie Sous-Marine Autonome (MESMA) system is being offered by the French shipyard DCN for the Scorpène-class submarines. It is essentially a modified version of their nuclear propulsion system with heat being generated by ethanol and oxygen. The combustion of the ethanol and stored oxygen, at a pressure of 60 atmospheres, generates steam which powers a conventional turbine power plant. This pressure-firing allows exhaust carbon dioxide to be expelled overboard at any depth without an exhaust compressor.

Each MESMA system costs around $50 to $60 million. As installed on the Scorpènes, it requires adding a new 8.3 metres (27 feet), 305-tonne hull section to the submarines and enables the vessel to operate for more than 21 days underwater, depending on variables such as speed.

Despite all the information leaks, Indian Chief of the Naval Staff Admiral Sunil Lanba had said that the leaks were being viewed “very seriously”, but were “not a matter of much worry”. The report also suggested that an ex-French Navy officer working as a sub-contractor for DCNS may have been the source of the leak and that this leaked data may have been compiled in France in 2011.

However, on August 30, 2016, a court in New South Wales temporarily banned The Australian from releasing any more confidential data on the Indian Scorpène-class submarines.

In 2005, India chose the Scorpène design purchasing six submarines for $3 billion ($500 million per boat) under Project 75 (P75). The project was necessitated by the dwindling number of submarines in the Indian Navy. The Indian Navy needed replacement for the older Sindhughosh (Kilo) and Shishumar (U209) class of submarines. The Scorpène design won the deal, defeating the rival U214 because of the capability to fire Exocet anti-ship missiles and an agreement on the Air-Independent Propulsion (AIP).

Construction of the first submarine started on May 23, 2009. The project is running four years behind schedule. Once the new government under Prime Minister Narendra Modi took over, the project was reviewed and necessary action was taken to make up for the delay. It was reported in November 2014, that the AIP system for the last two Scorpène submarines for the Indian Navy has been developed by the DRDO and was ready for testing in February 2015. The government of the day was finalising an order for additional three more Kalvari class submarines but in September 2016, the NDA government decided not to buy them.

As is the tradition, ships and submarines of the Indian Navy, are brought alive again after decommissioning…

The first Scorpène submarine, INS Kalvari (named after a deep sea tiger shark), was undocked from the pontoon on April 06, 2015, and launched on October 28, 2015. It completed the Basin trials and Harbour acceptance trials in April 2016, and commenced sea trials on May 01, 2016. The Indian Navy’s $300 million purchase of 98 torpedoes from WASS, a Finmeccanica/Leonardo company, remains suspended, as it is linked to the ongoing investigation into the 750 million Euros ($861 million) import of 12 AW101 helicopters from AgustaWestland, which is a Finmeccanica company and is facing corruption charges.

Defence Minister Manohar Parrikar under the new NDA government, said that the torpedoes for the submarine will be procured from other companies. The submarine will able to be armed with MBDA’s tube-launched Exocet SM-39 anti-ship missiles. The SeaHake torpedoes from Germany’s Atlas Elektronik and France’s F21 torpedoes may be considered. Indigenous torpedoes are under development by the DRDO and await testing. DRDO is given the go-ahead to make indigenous torpedoes for both Scorpene class and Kilo class submarines.

The state-of-the-art features of the Scorpene include superior stealth and the ability to launch a crippling attack on the enemy using precision guided weapons. The attack can be launched with torpedoes, as well as tube-launched anti-ship missiles, whilst underwater or on surface. The Stealth features will give it a degree of invulnerability unmatched by many submarines.

The Scorpene submarine is designed to operate in all theatres including the Tropics. All means and communications are provided to ensure inter-operability with other components of a Naval Task Force. It can undertake multifarious types of missions typically undertaken by any modern submarine i.e. anti-surface warfare, anti-submarine warfare, intelligence gathering, mine laying and area surveillance. The submarine is built according to the principle of Modular Construction, which involves dividing the submarine into a number of sections and outfitting them concurrently. The equipment is mounted in a special manner and then embarked into the sections.

The complexity of the task increases exponentially as it involves laying kilometres of cabling and piping in extremely congested compartments. Furthermore, the stringent tolerances of the Scorpene required to be maintained, were indeed a challenge, but were successfully achieved by MDL with traditional skill, determination and tenacity. All the major equipment has been installed on the Khanderi, with 95 per cent cabling and piping completed. Pressure testing, Setting-to-Work and commissioning of various systems of the submarine are presently in progress and would continue after the launching of the submarine.

The all-important safety milestone of vacuum testing was completed in the first attempt itself and within a single day on January 05, 2017. This matched the record of ‘Kalvari’, which also completed the Vacuum Test in one shot, a feat unmatched in the annals of the history of submarine construction. In this prestigious project involving Transfer of Technology, MDL has absorbed all offered technologies so far, mastering the various processes and challenges encountered en route.

Between now and December 2017, the submarine will undergo rigorous trials and tests, both in harbour and at sea, while on operating on surface or under water. These trials are designed to test each system to its fullest capacity. Thereafter, she would to be commissioned into the Indian Navy as INS Khanderi. This would be preceded by the commissioning of Kalvari later this year. The other four submarines will follow in the wake of Khanderi at intervals of nine months.

As is the tradition, ships and submarines of the Indian Navy, are brought alive again after decommissioning. The first Khanderi was commissioned into the Indian Navy on December 06, 1968, and decommissioned on October 18, 1989, after more than 20 years of yeoman service to the nation. In true nautical traditions, she will now be re-incarnated by MDL once again as a powerful predator of the deep, guarding the vast maritime interests and areas of the nation.

The launch and subsequent commissioning of Yard 11876 (Khanderi) not only marks a generational shift in technology insofar as submarine construction in India is concerned but also for submarine operations by the Indian Navy.

Recent years have seen large investments in modernising the submarine construction facilities at MDL. The 3,300-square metre Cradle Assembly Shop will enable the parallel outfitting of all cradles of the submarine, prior embarkation onboard the submarine. With the commissioning of the 5,700-square metre New Stores building inside MDL, the myriad material, fittings and equipment required for each submarine can be collocated with the submarines under construction, within easy reach of the outfitting teams. The setting up of a world class Composite Naval Submarine Crew Training facility, a 2,000-tonne hydraulic press and a 100 bar High Pressure Test facility, is likely to enhance the capability of MDL to build quality submarines on time.

The jewel in the crown in the modernisation of MDL is the new Submarine Assembly shop, a sprawling 10,000-square metre facility, which, in one go, will enable MDL to undertake concurrent construction of two submarine production lines, adding up to 12 submarines under various stages of construction at any given point in time. This is going to be a very major enhancement in capacity, to build futuristic strategic assets, necessary for India to realise its dream of becoming a credible regional and a global power especially on the high seas.