Home  >  News  > Geopolitics  >  Indo-US relations: Not natural partners at all

Indo-US relations: Not natural partners at all 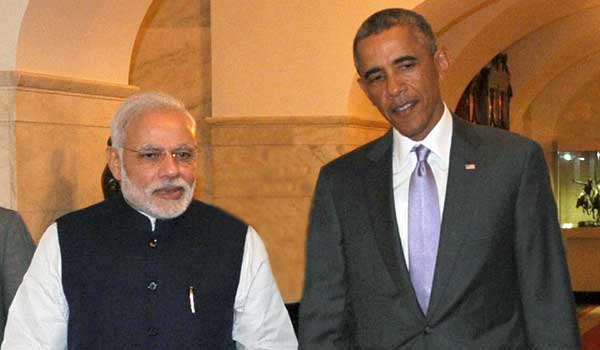 Narendra Modi with US President Barack Obama at the White House

If the media coverage in India of Prime Minister Narendra Modi’s US visit and the adulation with which the Indian-American community greeted him in New York were any yardstick, it can already be labelled a resounding success. No other Indian prime minister has connected so well with the Indian Americans.

Just before his departure, Modi sent a powerful message about making India a manufacturing hub in his ‘Make in India’ address to Indian and foreign investors.

This signifies that the entrepreneurial, achievement-oriented, can-do Indian Americans, who want to derive pride from India’s success, see Modi as a saviour.

Just before his departure, Modi sent a powerful message about making India a manufacturing hub in his ‘Make in India’ address to Indian and foreign investors.

If he can succeed in galvanising Indian businessmen to help realise his “First Develop India” take on foreign direct investment (FDI), it would be a giant achievement, as it is their reluctance to invest in India that de-motivated foreign investors too.

At the UN General Assembly Modi’s handling of Pakistan Prime Minister Nawaz Sharif’s offensive speech was masterly, as he responded to him with reticence and dignity.

He was on the mark on terrorism, implicitly criticising those whose actions have generated more widespread terror, whose combat against it in West Asia is not inclusive and who still use terrorism as a policy instrument.

He wisely rejected the politically shortsighted and morally shallow advice that he should have supported US-led military action against the Islamic State of Iraq and the Levant (ISIS) from the UN podium to signal India’s willingness to assume its responsibilities internationally.

…should explain why the US has never targeted Pakistan for decades of terrorism directed by it against India.

Those anticipating that US President Barack Obama will raise this subject with Modi and advocate that we must earn his goodwill and renewed attention by joining in the fight against ISIS should explain why the US has never targeted Pakistan for decades of terrorism directed by it against India.

Its reluctance to sanction Pakistan in the way it has sanctioned Iran, Syria and now even Russia is inexplicable politically and morally. This apart, the connection between regime-change policies in Iraq, Libya and Syria and the role of the Gulf states and the rise of ISIS has to be understood.

Much is being said about Modi and Obama’s personal chemistry to put relations back on track. Whether Obama, supposedly aloof and impersonal, can strike such a personal rapport with Modi is doubtful. In any case, correct relations based on a good understanding of mutual interests should be sufficient.

Some American commentators are putting the onus on India of repairing what is being described as a faltering partnership. Such a position makes little sense. Even with a stronger power, ties have to be forged on the basis of a balance of interests and mutual respect.

It is being argued that India’s declining economic growth and its trade and taxation policies are responsible for the deterioration of bilateral relations.

The US is now targeting India for our intellectual property rights (IPR) and preferential market-access policies, even though no US company has been targeted in the case of pharmaceutical patents.

The argument that Modi’s approach — centred on soliciting huge international investments for high-profile domestic projects — offers poor prospects for any major US response is not convincing. If Modi promises improved policies, simplified procedures, quicker decision-making, the goods and services tax by April 2016 and the demographic and demand dividends that India offers are not enough to revive US interest in India, then what is?

The US’ complaints about our nuclear liability law are becoming tiresome. Did the US sign the nuclear deal with India for business reasons or strategic ones? That US companies should look for business opportunities in India following the India-US nuclear deal is normal.

That India would be well-advised to limit the liability in time and financial scope is another matter. But for the US to hold up, as is believed, the nuclear deal with Japan and India’s membership of international export control organisations unless India bends on the liability law is not in consonance with the strategic calculations underlying the India-US nuclear deal.

The US is now targeting India for our intellectual property rights (IPR) and preferential market-access policies, even though no US company has been targeted in the case of pharmaceutical patents.

Yet, at the instance of select US corporations, otherwise making good profits in India, the US Congress and the Obama administration are investigating India’s trade, investment and IPR policies.

Some US Congressmen have asked the US International Trade Commission to pursue its investigations against India for another year, even while Modi is in the US.

As it is, the US has become India’s largest supplier of arms in the past five years, overtaking Russia.

This does not mean that we do not need to improve investor sentiment and respond to the genuine concerns of foreign investors, but bullying us in this way is another thing.

If just four years ago relations with India were for the US president defining for the 21st century, it makes little objective sense why India should be off his radar screen now, except if quick returns on the political stock exchange are more important for him than longer-term investment returns.

On the defence side, the government has already approved the purchase of US attack and heavy-lift helicopters. More should not be expected from the visit.

As it is, the US has become India’s largest supplier of arms in the past five years, overtaking Russia.

Yet US lobbies are not satisfied. The US will remain the most difficult partner for technology transfers. Because it wants to work only with the private sector, this will make progress in setting up the desired level of local defence manufacturing in partnership with it less likely.

The US is a hard nut to crack. And even if it could be, its contents are none too sweet.

2 thoughts on “Indo-US relations: Not natural partners at all”