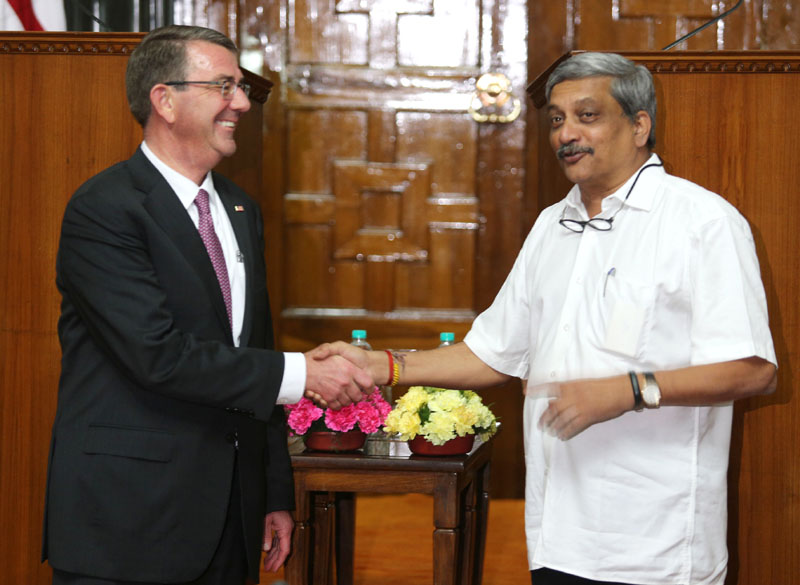 The Union Defence Minister Manohar Parrikar shaking hands with his US counterpart Dr. Ashton Carter, in New Delhi on April 12, 2016.

Following is the text of the Indo-US Joint Statement on the visit of Secretary of Defense Dr. Ashton Carter to India from April 10-13, 2016:

U.S. Secretary of Defense Dr. Ashton Carter is on an official visit to India at the invitation of Raksha Mantri Manohar Parrikar from April 10-13, 2016. Raksha Mantri hosted Secretary Carter in Goa. They visited the Indian Naval Base in Karwar and the INS Vikramaditya aircraft carrier. They also visited the USS Blue Ridge which was conducting a port call in Goa during the Secretary’s visit. Secretary Carter then traveled to New Delhi for official talks with Raksha Mantri. He will also meet the National Security Advisor and the Prime Minister.

The United States and India share a deep and abiding interest in global peace, prosperity, and stability. Bilateral Defence cooperation is a key component of the strategic partnership between India and the United States.Secretary Carter’s visit marked the fourth meeting between him and Raksha Mantri Parrikar within a year, demonstrating the regular Ministerial-level oversight of the robust and deepening bilateral Defence relationship.

During their meeting, Raksha Mantri Parrikar and Secretary Carter reviewed the important steps taken since the signing of the new Framework for the U.S.-India Defense Relationship last June to deepen bilateral defence ties. They discussed the priorities for the coming year in defence ties, as well as specific steps both sides will take to pursue those priorities. These included expanding collaboration under the Defence Technology and Trade Initiative (DTTI); Make in India efforts of Government of India; new opportunities to deepen cooperation in maritime security and Maritime Domain Awareness; military-to-military relations; the knowledge partnership in the field of defence; and regional and international security matters of mutual interest.

Raksha Mantri Parrikar and Secretary Carter welcomed the efforts by the Indian and U.S. Armed Forces to further expand collaboration in the years to come. They welcomed plans across our Services for greater complexity in their military engagements and exercises, including developing plans for more advanced maritime exercises. Both sides acknowledged India’s participation in the Rim-of-the-Pacific (RIMPAC) multilateral naval exercise in 2016 as well as participation by the Indian Air Force in the multilateral Red Flag exercise in April-May 2016 in Alaska and U.S. participation in the International Fleet Review of the Indian Navy at Visakhapatnam in February 2016.They expressed their desire to explore agreements which would facilitate further expansion of bilateral defence cooperation in practical ways. In this regard, they announced their in principle agreement to conclude a Logistics Exchange Memorandum of Agreement, and to continue working toward other facilitating agreements to enhance military cooperation and technology transfer.

In support of the India-U.S. Joint Strategic Vision for the Asia-Pacific and Indian Ocean Region and the maritime security objectives therein, both sides agreed to strengthen cooperation in the area of maritime security. In this context, they reaffirmed their desire to expeditiously conclude a “white shipping” technical arrangement to improve data sharing on commercial shipping traffic. They agreed to commence Navy-to-Navy discussions on submarine safety and anti-submarine warfare. They also agreed to launch a bilateral Maritime Security Dialogue, co-chaired by officials at the Joint Secretary/Assistant Secretary-level of the Indian Ministries of Defence and External Affairs and the U.S. Departments of Defense and State.

Secretary Carter and Raksha Mantri Parrikar reaffirmed the importance of safeguarding maritime security and ensuring freedom of navigation and over flight throughout the region, including in the South China Sea. They vowed their support for a rules-based order and regional security architecture conducive to peace and prosperity in the Asia-Pacific and Indian Ocean, and emphasized their commitment to working together and with other nations to ensure the security and stability that have been beneficial to the Asia-Pacific for decades.

Raksha Mantri Parrikar and Secretary Carter reviewed the progress and reiterated their commitment to pursue co-development and co-production of advanced defence articles under the DTTI. In this context, they agreed to initiate two new DTTI pathfinder projects on Digital Helmet Mounted Displays and the Joint Biological Tactical Detection System. They commended the on-going discussions at the Jet Engine Technology Joint Working Group (JETJWG)and the Joint Working Group on Aircraft Carrier Technology Cooperation (JWGACTC). They agreed to work towards greater cooperation in the field of cutting-edge defence technologies, including deepening consultations on aircraft carrier design and operations, and jet engine technology. They noted the understanding reached to conclude an information exchange annex (IEA) to enhance data and information sharing specific to aircraft carriers.

With the aim of encouraging greater participation of U.S. Defence Industries in the Make In India program of the Government of India, Raksha Mantri Parrikar informed Secretary Carter about the recently announced Defence Procurement Policy and other reforms in the Indian defence sector. Both sides agreed to encourage their respective defence industries to develop new partnerships in the pursuit of a range of cutting-edge projects. In support of Make in India, the United States shared two proposals to bolster India’s suite of fighter aircraft for consideration of the Government of India.

Before departing India, Secretary Carter will oversee a repatriation ceremony of U.S. World War II remains from India to the United States. Secretary Carter expressed his gratitude to Raksha Mantri Parrikar and the Government of India for their support in facilitating the recovery effort. The Indian Government agreed to support America’s commitment to bringing its fallen personnel home and providing their families the fullest possible accounting, and looks forward to further humanitarian missions of this kind over the next few years to return the remains of these U.S. heroes to their families.