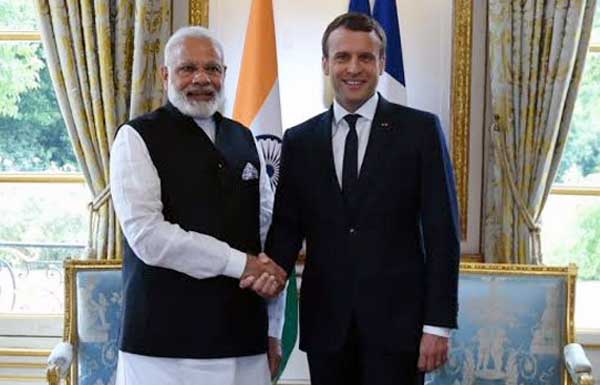 Amid significant rise in presence of Chinese ships and submarines in the Indian Ocean region, India is looking to build strong ties with France and the US. French President Emmanuel Macron, who is set to visit India this weekend, plans to hold talks with PM Modi on maritime security.

It is easy, sometimes, for foreign observers to forget that France is an Indian Ocean power, with a medium-sized military presence but a vast exclusive economic zone (EEZ), as well as a longstanding sphere of influence in the southwestern quadrant of the Indian Ocean.

La Reunion and Mayotte account for about one million French citizens, and when combined, France’s EEZ in the Indian Ocean amounts to more than 2.6 million square km.

In terms of cultural influence, there is a certain overlap with regard to French and Indian soft power in the Southwestern Indian Ocean. For example, Madagascar, with its strategic location astride the Mozambique Channel, is a former French colony, where French is still widely spoken, but where for a long time ethnic Indians of Gujarati origin controlled a large chunk of the local economy. Similarly, 25 percent of the population of la Reunion is of Indian origin.

At a grand strategic level, France and India’s interests in the Indian Ocean are closely aligned. Both countries have historically played an active custodial and humanitarian role throughout the region. They share concerns over the risks of sea-borne nuclear proliferation, and with regard to malevolent non-state actors. The two republics uphold similar core values when it comes to freedom of navigation, and closely monitor the threats posed by certain revisionist actors to the security of sea lines of communication

Réunion Island, Mayotte and scattered islands, as well as Antarctic territories are part of France and represent a significant Economic Exclusive Zone. France is (therefore) a bordering country of the Indian Ocean. The French Forces in the region ensure safety and sovereignty of the French territories and maritime areas.

The French President coming to India and the talk of naval diplomacy comes at a time when India was forced to exercise restraint in Maldives crisis. Chinese had warned India against any military action. There were reports of Chinese naval presence close in the region that thwarted the India’s Maldives plan. Though these reports were denied by the officials at New Delhi, however the official version had a few takers amongst the strategic community.

In short, what China exercised was something this Indian Ocean region is witness to for past few centuries. The European navies have effectively conducted the Gunboat Diplomacy, who came in the name of trade but ended up colonising the rim of Indian Ocean.

Gunboat diplomacy used small squad of warships sailing into a strategic area and using it as a leverage for negotiations. In Asia during the 19th century, western navies sent their most modern warship accompanied by strong personalities of negotiators, that petrified many Asian countries. The fear turned eventually to “furtherance” for Western powers. “Furtherance” that meant unequal treaties or later on annexation.

Maldives islands south of India could well be the next place for a Chinese naval base. Although traditionally within India’s strategic sphere, in recent years the Maldives has become unstable, impoverished and increasingly desperate. Recent crisis in these Island territories and the geo-strategic manoeuvres there on could well end up Male gravitating towards China seeking long term security and stability.

More so, as per the reports, China may be about to construct a naval and air base near Gwadar at Jiwani, in Pakistan. This would be China’s second base in the Indian Ocean and indicates that it may be moving fast to establish a network of military bases across the region.

It stated that China is about to start construction of a new naval base and airfield at Jiwani, some 60 kilometres west of Gwadar. While this has not been confirmed by Beijing, Jiwani would make a good location for a base. It would separate Chinese naval forces from commercial shipping at Gwadar.

Chinese facilities at Djibouti and Gwadar/Jiwani are unlikely to be the end of China’s expanding military presence in the Indian Ocean. China will also require facilities or staging points in or around east Africa, to help protect its massive energy trade from West Africa travelling around the Cape.

There are a number of potential candidates among the weak and underdeveloped countries in that part of the world. Tanzania could well be a good location. China has a close and longstanding relationship with Tanzania and recently took control of the newly built port of Bagamoyo, around 50 kilometres north of the Dar es Salaam.

China will also likely require naval facilities in the central and/or eastern Indian Ocean as part of a new Indian Ocean network. China recently took control of the port of Hambantota in southern Sri Lanka, leading to a lot of speculation about Beijing’s intentions. But the Sri Lankan government denies that China will be permitted to develop any naval presence there.

China’s naval force posturing stems from a doctrinal shift to ocean-centric strategic thinking and is indicative of the larger game plan of having a permanent naval presence in the Indian Ocean. China’s maritime strategy comprises four key components.

Channel naval reinforcements for securing its maritime trade and economic interests in the Indian Ocean Region (IOR)—even as it strengthens the Maritime Silk Road initiative.

To develop logistical and operational capacities for a permanent far-seas presence, including preparedness for maritime combat and non-combat operations.

To undermine India’s geo-strategic influence in the IOR as the two lock into a near zero-sum game maritime competition.

To overcome the threat of US naval dominance and deter its coercive tactics by enhancing the costs of military conflict. Beijing’s ultimate objective is to emerge as a ‘global maritime power’ capable of commanding the far seas and oceans.

During the recent and still ongoing Maldives crisis, India has realised that the enthusiasm generally shown by global and regional powers, seeking a larger Indian role in the hyphenated geo-strategic spaces of Indo-Pacific region was missing, when it came to safeguarding her interests in the neighbourhood.

It is precisely this very reason that makes the French president’s visit to India seeking deeper and broader ties in maritime security all the more significant.

France’s interest in helping preserve stability in the Indian Ocean is aptly summarized in the 2013 French White Paper, which describes the Indian Ocean as a transit region for international trade, and “at the heart of world strategic challenges.”

France maintains a military presence in the Persian Gulf region, with air, naval, and ground forces in Abu Dhabi, as well as in the Horn of Africa, in Djibouti. In addition to the basing of these military assets, Paris recognizes that the Indian Ocean Region’s strategic equilibrium can only be truly maintained once India has emerged as a more powerful naval actor, with a greater capacity for sustained operations at sea and power projection.

The annual Varuna naval exercises between India and France should therefore not solely be viewed through the prism of military diplomacy, but also as a deliberate French effort in regional capacity building. Over the past few years, these exercises have grown in scale and complexity, involving high-end platforms such as nuclear powered submarines and aircraft carriers. Through the regular conduct of such joint exercises, both countries have increased their interoperability and general proficiency.

In the future, the Indian Ocean is likely to become a region of increased military competition – whether conventional, nuclear or sub-conventional. In light of these shared uncertainties over Washington’s staying power, it might prove judicious for second-tier democratic powers to begin to more effectively coordinate their strategies and policies.

A more institutionalised strategic dialogue between India and France with regard to security in the Indian Ocean Region might provide a good first step. Paris and New Delhi should seek to enhance their cooperation in the field of maritime domain awareness and intelligence gathering.

Over the past few years, a dual-use infrastructure competition has been emerging across the Indo-Pacific. This low-level, almost subterranean, contest is unfolding in Southeast Asian archipelagic regions, where both the U.S. and China have competed to provide countries such as Indonesia with coastal radar systems under dual management, or throughout the Indian Ocean basin, where both India and China have vied for access and surveillance amongst smaller littoral and island nations.

Under the guise of regional capacity building, revisionist powers such as China can slowly expand their influence and develop the intelligence and support infrastructure needed to sustain military operations at sea. By spreading coastal radar chains, or shore-based electronic sensors in places such as the Maldives and Seychelles, China can increase its operational awareness of the maritime environs of both Indian and French partners.

There is clearly scope for both France and India’s diplomatic and intelligence communities to better coordinate on the challenge posed by dual-use infrastructure, particularly in Eastern Africa and the Southwestern Indian Ocean.

China’s expanding global footprint and international interests are reflected in its Belt and Road Initiative of economic, commercial, and infrastructure projects in Asia, Africa, the Middle East, and Europe.The Chinese military modernisation programme is expanding in concert with this initiative to include investments and infrastructure to support a range of missions beyond China’s periphery, including power projection, sea lane security, counter piracy, peacekeeping, and humanitarian assistance and disaster relief.

China’s most recent white papers and doctrinal writings emphasise the requirement for an army to be able to secure expanding Chinese national interests overseas, including a growing emphasis on the importance of the maritime domain, offensive air operations, long-distance mobility operations, space operations, and cyber-operations.

The Indian and the Chinese (Naval) areas of interest (both primary and secondary) are expanding, reflecting New Delhi’s willingness to play a larger role in the region.

Over the years, India’s ASEAN friends have voiced their disappointment in New Delhi’s lack of naval and political presence in the South China Sea, against the backdrop of a rising China.

For India, South China Sea in particular and Indo-Pacific region in general continues to be her, ‘secondary area of interest.’ The primary areas of interest continues to be rim of Indian Ocean Region. And France being a formidable naval power in this region makes a larger geopolitical sense in aligning her powers with, for India.

One thought on “Indo-French Naval Diplomacy”