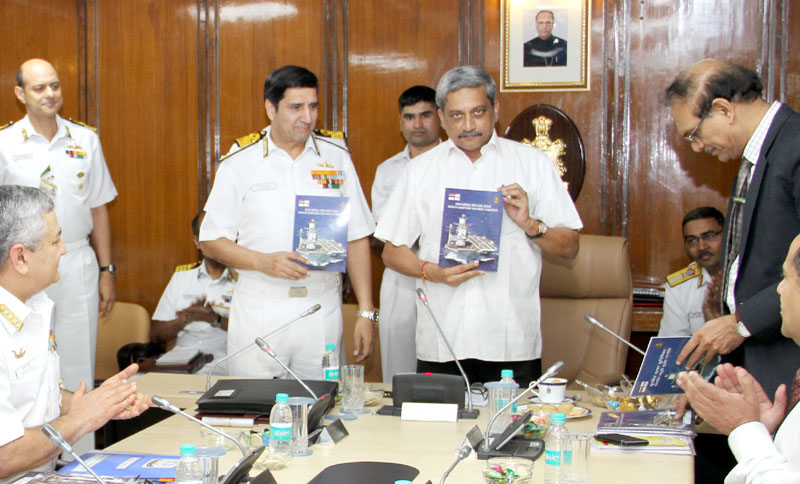 The biannual Naval Commanders’ Conference of 2015 commenced in New Delhi today. This conference is held to discuss issues of operational relevance, identify capability gaps and to review the future plans of the Navy.

The Defence Minister Manohar Parrikar inaugurated the conference and congratulated the men and women of the Indian Navy for discharging their duties with utmost diligence and professionalism. He met Chief of the Naval Staff Admiral RK Dhowan, Commanders’-in-Chiefs of various commands of the Navy and other top commanders and held discussions with them.

Addressing the Commanders’, Manohar Parrikar emphasised on the need for continuous vigil and readiness to respond to any contingencies in our area of interest which required maintaining highest combat readiness of platforms and diligent monitoring of developments in the maritime domain. He assured the Commanders’ that the Ministry of Defence is committed to provide the requisite support to Indian Navy’s quest for planned modernisation activities.

Taking note of the extensive deployments at extended ranges from our coasts, spanning from the South China Sea and Sea of Japan in the East to the Persian Gulf and the Atlantic Ocean in the West, the minister expressed satisfaction at the very high operational tempo maintained by the Indian Navy.

Manohar Parrikar complimented the Indian Navy’s continuous presence and pro-active focussed operations in deterring piracy attempts off the Gulf of Aden which resulted in the recent decision by CGPCS to shift the eastern limit of High Risk Area from 78 Degrees East to 65 Degrees East. Incidentally there has been no hijacking of Indian owned ship since 2008, the minister stated.

Stressing that ‘Make in India’ is an important aspect, he expressed his pleasure with the impetus being imparted towards indigenous development of naval capabilities and pace of modernisation programme of the Indian Navy. He was appreciative of the strides made by the Naval Designers, and has urged that the indigenous component in fight category needs to be increased esp. in submarine construction. He also highlighted the issues of capability shortfalls of ship borne helicopters, MCMVs and submarines and assured full support of the Government in addressing them.

Addressing the challenges pertaining to human resource development in the Navy, which are unique due to high levels of technical skills required to operate complex, state-of-the-art ships, submarines and deck launched fighter aircraft, Manohar Parrikar extended his unstinted support towards improving the quality of life and welfare of our sailors and their next of kin. He congratulated the Navy for designating the current year as the ‘Year of the Sailor’.

Manohar Parrikar expressed confidence that the Senior Commanders of the Navy will take a closer look at all the important issues and take decisions to address the shortcomings and chart a futuristic, visionary roadmap for the Navy.

Manohar Parrikar also released the follow-on edition of the Navy’s strategic guidance document titled ‘Ensuring Secure Seas: Indian Maritime Military Strategy’. The need to revise the existing strategic guidance document (published in 2007) arose in view of the prevalent geo-economic and geo-strategic scenarios which in turn have increased the navy’s role and responsibilities significantly in the last decade. This edition highlights the incontrovertible link between the seas and India’s resurgence in the 21st century.

The Naval Commanders are discussing matters related to combat readiness of the fleet and other operational formations, building capabilities for the future and addressing human resource challenges amongst others.