Home  >  News  > Military & Aerospace  >  India’s Vijay at Kargil: Lessons that Remain Unlearnt from the Past

India’s Vijay at Kargil: Lessons that Remain Unlearnt from the Past 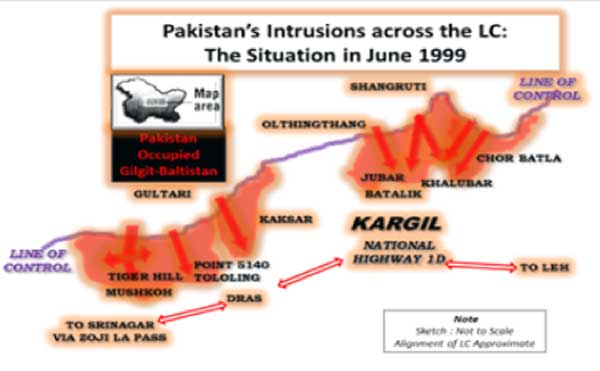 “The Kargil Operation was an audacious attempt to seize an opportunity of historic proportions.”[1]

The 1999 military confrontation on the heights of Kargil was a perilous episode in the ongoing Indo-Pakistan conflict as unlike the past, this could have easily spiralled beyond Kashmir. The conflict has been characterized based on its scope, intensity and context.  Mr. Peter Lavoy comments: “This crisis, in comparison to previous conflicts in the region, drew an unprecedented level of controversy, competing narratives and implications for domestic politics not specifically for Pakistan, but also for India and for the course of international relations in South Asia.”[2] The Kargil War, which has been described as a ‘limited’ war,[3] since the ‘ends’ and ‘means’ were limited, has also been classified as an escalation of the ongoing Indo-Pak ‘proxy war.’ In a way, it was all that, but more as it was fought with the added risk of a nuclear exchange. Nevertheless, it was also a war that should never have taken place, and the fact that it did, especially in the way it could have manifested, was a grim reminder that India was reacting, yet again, and this remains the nub of the questions that are being brought up in this article.

Mr. K Subramanium, the doyen of India’s strategic thought sums up Pakistan’s motives: “The Kashmir intrusions were essentially a limited Pakistan exercise designed to internationalise the Kashmir issue which was tending to recede from the radar screen of the international community. It was, therefore, mainly a move for political and diplomatic gain.”[4] If the intension of the intrusions was merely to flag the attention of the world, Pakistan certainly achieved her aim. Though in the end ‘Vijay’ (victory) was declared by India, this proved ‘tactical,’ as the strategic ‘victory,’ would have been Musharrafs,’ as his aims, both diplomatic and political were achieved, though he had to face defeat in military terms on the wind swept – rocky peaks of Kargil.

The Kargil War highlighted familiar weaknesses in the Indian psychological makeup once again and the same macro lessons emerged – lack of strategic forethought and synergy at the politico-military levels, both in letting the surprise to manifest as it did, and later in conceptualising the conflict termination objectives. The military leadership also cannot be condoned, as its exaggerated focus on countering the insurgency in Kashmir contributed to lowering her guard against just the type of ‘conventional – unconventional’ threat that manifested in Kargil. More importantly, the political decision not to violate the sanctity of the LC had far reaching implications and added to the human cost of the war.

While each of the earlier Indo-Pak Wars had thrown up their own lessons, many were repeated, and by the end of the Kargil War, most re-emerged with disappointing frequency. India had learnt little, if at all, and as put by Ms. Navnita Behra, the “…two and a half wars on Kashmir soil have failed so far to produce an effective military strategy in the region, owing to a deep seated defensive outlook and the lack of offensive military objectives.”[5]

1999 was in many ways a repeat of 1947 and 1965. Pakistan initiated hostilities by infiltrating proxy warriors into Kashmir and a sub-conventional war escalated into a multi-dimensional war.

The Unlearnt Lessons from the Kargil Episode

While Kargil proved the mettle of the Indian military, especially of her junior leadership, it also raised fundamental issues that need to be addressed by the establishment and the armed forces. In many ways, Kargil was a repeat of the familiar shortcomings that had already emerged in the wars before 1999, and Kargil was yet another wake up call. More than the lessons learnt from actual events, there are greater lessons to be learnt ‘from what could have happened.’ Since a detailed and pragmatic study has already been carried out by the Kargil Committee Review, repeating them is not intended in any way. However, it is important to highlight that the recommendations made by the late Mr. K Subramanium should have seen the light of the day after a decade plus after the war, at least by the same political party, who is in power for over a year now. In drawing military lessons from the Kargil conflict, it will be endeavoured to link them with those that remained unlearnt from the past; those which have got lost somewhere in the din and dust of bureaucracy and petty politicking, at great cost to the security of the nation and detrimental to the morale of the armed forces.

The Myth that the Possession of Nuclear Weapons mitigates Conventional War

The Kargil conflict flew in the face of the thinking that the overt demonstration of nuclear weapons would consign conventional wars to the dustbins of history. The fact that Kargil exposed the strategic space that still existed, was, and should remain the biggest lesson for India. General Malik has commented on the Pakistani propensity to use the nuclear card and exploit the decision dilemma within the Indian leadership to gain operational gains. He writes: “As Pakistan’s nuclear weapons capability grew, the sub-conventional war in J&K kept escalating. It’s military strategy since late 1980’s has been to escalate proxy war, and brandish the likelihood of a conventional war and a nuclear ‘flashpoint,’ whenever India threatened to use of its conventional force.”[6]

1999 was in many ways a repeat of 1947 and 1965. Pakistan initiated hostilities by infiltrating proxy warriors into Kashmir and a sub-conventional war escalated into a multi-dimensional war. There is a very thin line distinguishing the two forms of war, as it is the response that can turn any proxy war into a wider conflict. To exemplify, the attack on the Indian Parliament in December 2001 nearly led to a war. Even under the prevailing situation of unrest within Pakistan, India need no reminder that the east can be the only direction where Pakistan can vent internal pressures. Despite the change in guard in Pakistan and CBMs in place, this threat lurks beyond the horizon.

…Kashmir, which includes Gilgit-Baltistan and POK, were integral parts of the Kashmir that had officially acceded to the Indian Union.’ This sentiment was even reiterated in the Parliament Resolution of 22 February, 1994. Thus, this short-term aim went against the ‘declared’ national aim.

It would be an understatement that Kargil was intimately linked to the ongoing Indo-Pakistan conflict in Kashmir. While limiting the immediate battle space to the Kargil sector was a clearly stated Indian term of reference, one that won kudos for India diplomatically, this worked to the military’s disadvantage in great measure. What is also important is that the ‘end state’ in no way contributed to lowering of violence levels in Kashmir as Pakistan’s sponsored proxy war continued to plague Kashmir and the sub-continent. Even as the nation celebrates the sixteenth anniversary of the victory, neither Kashmir nor the nation is still secure.

In 1999, the only defined objective by India was to ‘evict the intruders.’ This aim, though well intended, was a ‘reactive’ one and helped sanctify the LC in the minds of the international fraternity. Forgotten in this stated aim was the impassioned resolution made on the floor of the Indian Parliament by Pundit Nehru that Kashmir, which includes Gilgit-Baltistan and POK, were integral parts of the Kashmir that had officially acceded to the Indian Union.’ This sentiment was even reiterated in the Parliament Resolution of 22 February, 1994. Thus, this short-term aim went against the ‘declared’ national aim.

While it is not intended to suggest that India should have escalated the war beyond Kargil, speaking with the (undue) advantage of hindsight, this was an opportunity to deliver an unambiguous signal for Pakistan to stop abetting proxy war in Kashmir. It is argued that Pakistan’s blunder of intruding in Kargil could have been exploited and selective Trans LC targeting could have been undertaken on militant camps/ installations during the din of the conflict. In any case, from her side, Pakistan had disowned the intruders by insisting that they were mujahedeen. India’s retaliatory targeting of their camps in POK and Gilgit-Baltistan would have found acceptability in the comity of nations as they were purportedly supporting the intrusions. The world could also have been provided proof of Pakistan’s abetment of the proxy war, which was the reason for the insurgency in Kashmir in the first place – this was not done in adequate measure.

In the ultimate analysis, the insurgency in Kashmir not only continued to flourish, but following the change in guard in Pakistan, the war on India, became even more vicious and wide spread. Despite India’s tactical Vijay at Kargil – clearly the Indian response proved ‘inadequate.’ In the light of this politico-military lesson, Late Air Commodore Jasjit Singh writes that for the future: “Serious consideration must be given to planning for ways and means for winning such (limited) wars.” [7] India therefore, needs to come up with an ‘end to end’ strategy for another such eventuality.

2 thoughts on “India’s Vijay at Kargil: Lessons that Remain Unlearnt from the Past”