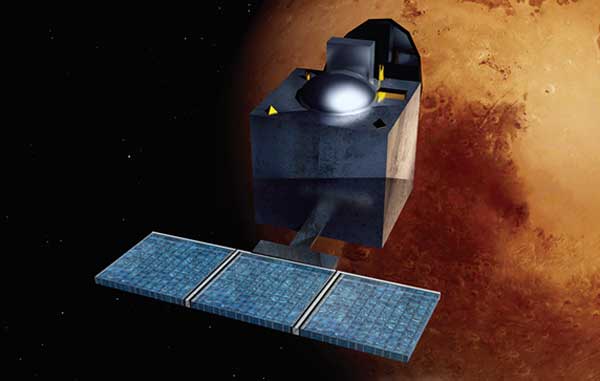 As in the case of the US, for India too, satellite data and its associated connectivity touch every aspect of daily life. As India’s space programme blooms in keeping with ISRO’s Space Vision 2025, its contribution to the national economy will grow from its already impressive levels. The continued wellbeing of India’s space assets including ground stations as well as space-based assets, assumes grave importance in this light. There is also the concern for continued ability to exploit space for non-military purposes. Perhaps it is time to focus on the vulnerabilities of our space assets and the conceivable threats that they may face in the future. A deliberate approach to this aspect would then help strengthen a national space security policy.

After the success of MOM, ISRO plans to revisit Mars in 2018…

When appraising India’s space endeavour, it is hard to resist the temptation to start with an achievement so proximate in time and so vividly etched in public perception, that of Mangalyaan (literally interpreted as Mars Vehicle). On September 25, 2014, India became the fourth space-faring nation after Russia, US and Europe (through the European Space Agency or ESA) to place a space vehicle in orbit around Mars. India has many reasons to be proud of Mangalyaan; perhaps the most prominent is that it was placed into Mars orbit in India’s maiden attempt. Before this, only ESA’s Mars mission was successful in the first attempt. Also called Mars Orbiter Mission (MOM), the spacecraft was launched on November 05, 2013, by the Indian Space Research Organisation (ISRO).

Having begun half a century before the Mangalyaan launch, India’s space endeavour has evolved magnificently. This commentary briefly reviews the evolution of Indian space programme and contextualises space deterrence in the backdrop of the India-China rivalry.

From Germination to Mellowing

This section must be preceded by a qualifying statement that it does not purport to be a comprehensive chronicle describing the evolution of the Indian space programme but only outlines facts and figures necessary to understand the rationale driving its trajectory. The saga of India’s space endeavour began with Dr Vikram Sarabhai. Having obtained his doctorate from Cavendish Laboratory (UK) in May 1947, he returned to India to establish the Physical Research Laboratory (PRL) in his residence.

He was its Director until 1971 and, during his directorial tenure, drafted the proposal for India’s participation in the International Geophysical Year (IGY) slated for 1957-1958. The Sputnik was launched during the IGY and changed the way Indian public and Dr Sarabhai perceived space research. Those were the days of the US and USSR indulging in a desperate steeplechase with the moon as the finishing point. Praiseworthy credit is due to Dr Sarabhai for fine-tuning India’s space ambition into an agenda driven by pragmatic and developmental impulses rather than by envy and craving. He sent a proposal to the government in 1961 for a modest but focussed space programme oriented towards development. As a result, the Indian National Committee for Space Research (INCOSPAR) was set up under the Atomic Energy Authority in 1962 with the mandate to advise the government on space research, promote international collaboration and to participate in international activities.

INCOSPAR went about setting up the Thumba Equatorial Rocket Launching Station (TERLS). India’s space programme began at Thumba under primordial conditions. An oft-quoted circumstance is that of Indian rocket parts being transported by bicycle; allied pictures can be found in books dealing with Indian space programme. India’s first launch was that of a home-built version of the French sounding rocket Centaure with the help of American National Aeronautics and Space Administration (NASA) and French Centre National d’Etudes Spatiales (CNES). The launch took place on November 21, 1963, five decades before the Mangalyaan launch.

Unfortunately, its historic significance was overshadowed by President Kennedy’s assassination the following day. On Sarabhai’s proposal, the launch centre at Thumba was turned into an international one and it was renamed International Equatorial Sounding Rocket facility with NASA, CNES and the Soviet Hydro Meteorological Service as partners. Of special significance is the ambivalence in the selection of partners, a reflection of India’s level of maturity. The first fully indigenous sounding rocket, Rohini 75 was launched in November 1975 with rapid advances in sounding rocket design. From the 75 mm diameter of Rohini 75, the programme progressed to 1,000 mm diameter with four stages.

By the late 1960s, it became evident that the space programme under INCOSPAR was reaching adolescence and had to be given free reins by its parent body, the AEC. On August 15, 1969, ISRO was established as the functional entity with the Space Commission being set up as a policy-making body under the Department of Space which was under the Prime Minister’s Office (PMO).

Dr Sarabhai had the vision to realise the benefits of space-based oceanography, geology, hydrology and cartography for Indian consumption but was realistic in his reckoning that an indigenous space applications programme would take a long time to fructify. He embarked upon creating a bank of scientists and technicians to spread the space programme in extent and capability. Unfortunately for India, he passed away suddenly on December 30, 1971, possibly consumed by his passion, working 20 hours a day, a routine aptly described by his widow, Mrinalini Sarabhai as, “always burning the candle at both ends.”

However, during his lifetime, he focussed his energies on laying the foundation of an Indian space programme that aimed at producing satellites for development, education and remote sensing while working towards indigenisation in the space arena. By 1972, when Satish Dhawan was appointed Chairman of ISRO, the Thumba facility employed 3,000 personnel. The development of a launch vehicle, elemental requisite for putting a satellite into orbit, began in the early 1970s but it was evident that it would take considerable time to get an indigenous launch vehicle equipped to go.

On the other hand, putting together a satellite proved to be a simpler task. An agreement with USSR paved the way for an Indian satellite to be placed in orbit around the Earth and three years later, Aryabhatta, named after the fifth century astronomer, was launched from Kapustin Yar in the USSR aboard a Cosmos 3M rocket. For the next five years, the Aryabhatta helped study stellar X-rays, neutron and gamma radiations from solar flares and particles and radiation flux in the Earth’s atmosphere.

It took almost a decade of development for the first successful experimental Satellite Launch Vehicle (SLV-3) in 1980 to mark India’s debut on the space arena. It was a four-stage, solid fuel, 17-tonne vehicle capable of putting a 40-kg payload in low earth orbit (160 to 2,000 km from the Earth). After two developmental launches in 1987 and 1988, the Augmented SLV or ASLV labelled ASLV-D3, was launched successfully in 1992, further consolidating Indian vehicle technology and giving the nation cause to rejoice and ISRO to revel in its success. Developed as a low-cost intermediate vehicle to demonstrate and validate critical technologies, it was a 40-tonne craft with a payload capacity of 150 kg up to 400 km circular orbits. 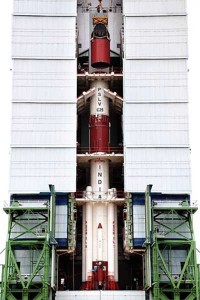 The ASLV provided valuable inputs for the successful development of the Polar Satellite Launch Vehicle (PSLV) which had its first successful launch in 1994. With a lift-off weight of 295 tonnes, it can place a 1,600 kg satellite in sun-synchronous polar orbit or a 1,050 kg satellite in Geo-synchronous Transfer Orbit (GTO). The first and third stages are solid fuel and the second and fourth liquid. The Chandrayaan mission to the Moon launched in 2008 and the Mangalyaan both used PSLV variants.

The first flight of the Geosynchronous Satellite Launch Vehicle (GSLV) took place in 2001. With a lift-off weight of 414 tonnes, the Mark I/II GSLV can place a 2,500-kg satellite into GTO. Its first stage is solid, second liquid and the third cryogenic. The GSLV Mark III is a 630-tonne vehicle with payload capacity of up to 5,000 kg. The first and second stages are carried forth from the PSLV design while the third stage is cryogenic which is much lighter and therefore can travel farther away from Earth. India’s quest for cryogenic technology deserves special mention here.

In December 1982, India had formed a cryogenic study team to focus on the development of an engine which could generate a thrust of ten tonnes. The team reached the realistic conclusion that indigenous development of such engines would pose major technological challenges. India decided to import cryogenic engines from Russia to expedite its GSLV programme and in 1991, ISRO signed a $120 million contract with Glavkosmos of Russia for seven cryogenic rocket engines along with a complete transfer of technology. ISRO officials said India had to approach Russia because no other country was willing share this technology fearing it would be used for military purposes. Under the agreement, Indian scientists spent 15 months in Russia but were not given access to any significant technology related to cryogenic engines.

Meanwhile, in July 1993, the US arm-twisted Russia into stalling the engine supply saying it flouted the Missile Technology Control Regime (MTCR). The US sanctions on ISRO and Glavkosmos were a huge setback to the GSLV programme but in the long run proved to be a blessing in disguise. Forced to find a home-grown solution, ISRO fast-tracked research at the Liquid Propulsion Systems Centre (LPSC) at Mahendragiri in Tamil Nadu and was able to test an Indian Cryogenic Engine (ICE) successfully in 2009. However, on April 15, 2010, the first GSLV launch with ICE plunged into the Bay of Bengal within minutes after take-off from Sriharikota. In January 2014, with the launch of GSLV-D5, India joined the club of countries like the US, Russia, Japan, France and China which have successfully developed their own cryogenic engines. A suborbital flight test of the GSLV-III launcher, with a passive cryogenic third stage, was successfully carried out on December 18, 2014, and was used to test a crew module on a suborbital trajectory.

After the success of MOM, ISRO plans to revisit Mars in 2018, possibly with a lander and rover to conduct more experiments. According to S Shiva Kumar, Director, ISRO Satellite Centre, “We will be able to take the Mars-2 mission after the second mission to the Moon dubbed as Chandrayaan-2 to be launched in 2016 with our own lander and rover. This mission will help us develop a separate lander and rover for the Red Planet.”