The impression sought to be created by the political leaderships of the two countries is that the bilateral relations are developing satisfactorily and that there is nothing to worry about. The reality is otherwise. India has many reasons to worry about the Chinese policies and capabilities, but by playing them down and avoiding highlighting them the Government of Dr. Manmohan Singh is repeating the mistake of Jawaharlal Nehru in the 1950s when he tried to play down Chinese intrusions into Indian territory in the Ladakh sector and their construction of the Aksai Chin Road. By the time he realized the seriousness of the Chinese activities and sought to draw international attention to the malign intention and activities of the Chinese, it was too late. When the Sino-Indian military conflict of 1962 broke out, we were caught unprepared and without the support—-not even the moral support—- of the international community. 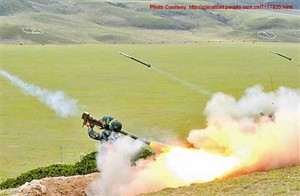 The Chinese leaders are quite happy with the reluctance shown by the Government of Dr.Manmohan Singh to inform the Indian public opinion and the international community about the nature of the activities of the PLA under the cover of friendship. It suits their designs that the international community is given the impression that everything is normal in Sino-Indian relations and that the Government of India is not unduly worried over the Chinese activities.

The Chinese assertiveness across the Sino-Indian border and their determination to enforce their territorial claims in Arunachal Pradesh have been evident for about two years now. Their virtual military alliance with Pakistan has been a new worrisome factor. It was during the same period that similar Chinese assertiveness was directed against some ASEAN countries with which China has disputes over island territories in the South China Sea and against Japan with which China has disputes in the East China Sea. Instead of playing down their concerns over the Chinese assertiveness, those countries made their concerns evident to the international community thereby inviting statements of support for them from the US.

An energetic response need not necessarily be in the form of a slanging match with Beijing. It ought to be in the form of a crash programme to strengthen our defence capabilities against China and building up a network of strategic relationships with countries such as Japan and Vietnam.

The Chinese are particularly angry with the present Government in Japan because it actively highlighted the Chinese activities which threatened peace and security in the East China Sea area and invoked the support of the US under its security commitments to Japan.

As against its anger against Japan and irritation against Vietnam, the Chinese leadership is happy with the lack of an energetic response from the Government of India. This has enabled the Chinese to go ahead with their activities detrimental to India without having to face adverse attention from the international community.

While the keenness of the Manmohan Singh Government to maintain the seeming cordiality and momentum in the relations with China is understandable, its soft response to Chinese activities which could prove detrimental to Indian interests and security could prove counter-productive and could ultimately lead us to a military confrontation, however much we may want to avoid it. Softness in response has been the defining characteristic of our policies towards Pakistan and China. They are both taking advantage of our reluctance to respond energetically to undermine our security.

An energetic response need not necessarily be in the form of a slanging match with Beijing. It ought to be in the form of a crash programme to strengthen our defence capabilities against China and building up a network of strategic relationships with countries such as Japan and Vietnam. The hopes entertained by many of us that Dr.Manmohan Singh would avail of his recent visits to Japan and Vietnam for this purpose in a manner that would convey an unmistakable message to Beijing have been belied.