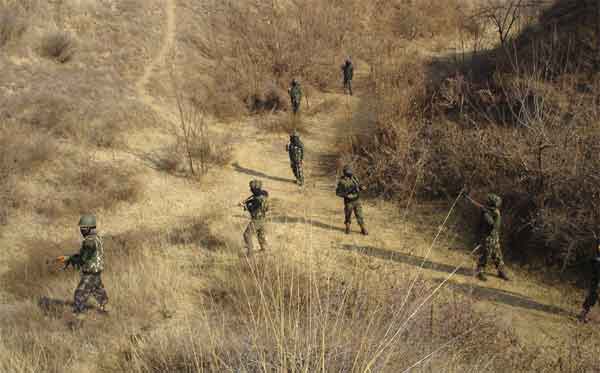 Instead of removing poverty, the politician turned poverty into business of vote-bank-politics. Result: Sixty-two years later Maoists control forty percent of the Indian Territory and the insurgents in the border states have influence in another ten percent, both with explicit support of external actors.

While the Army is battling insurgents for decades in Kashmir and in the Northeast, in all likelihood, it will be drawn into conflict with the Maoists to reclaim territories under their control. This is a direct consequence to the demonstrated incompetence of the inept and crumbling Civil Administration. Resources of the Army, Air force and the Navy are already at an all time low and are over stretched, undermining the capability of the Indian military machine to fulfill its primary role of coping with the challenges of external threat.

Beijing and Islamabad are delighted with New Delhi’s clumsy response.

Couple the internal threat with burgeoning external threat. Beijing boasts of capability to create three-pronged mischief on the Indian Borders. First, China has built elaborate infrastructure and potent military capability in Tibet. Second, it not only synergized anti-India activities with Pakistan but has also positioned elements of the PLA inside PoK. Third, China quietly propelled their proxy Maoists (Nepal) to the centre-stage in Katmandu. Not to mention the advantage China gained in Sri Lanka while India lost some.

The Indian Navy grappling with increasing incidents of piracy, securing the EEZ, the 7500 km of coastline and Sea Lines of Communications, now faces the prospect of confronting the Chinese Navy in the Indian Ocean. The competitive interests of the two rapidly growing economies for energy and transit can transform the Indian Ocean in to an area of bitter conflict in the near future.

MoD floats tenders and cancels them with an unbelievable regularity.

Apart from its wits, the Indian Navy will require a large and modern arsenal.

New Delhi’s indecisiveness, inconsistent and callous approach to modernization of the Armed Forces, ignorance, and enormous bureaucratic red tape keeps the Army, Navy and the Air Force under-equipped and devoid of adequate material and human resources to meet the growing threats.

The irony is that while Indian taxpayer’s money helps rebuild war torn Afghanistan, Beijing walks away with the riches.

…the Indian Army, the Navy and the Air Force are unequal to the task the nation expects them to execute incase push comes to shove.

To cope with a two-front war, the IAF requires 60 air-worthy combat squadrons. The professional assessment to tackle the challenge of a single front war and holding action on the other front requires 45 squadrons.

New Delhi sanctioned 39.5 squadrons, but has indicated intent to raise the squadron strength to 42 by the end of the current decade.

Of the sanctioned strength of combat squadrons, for the IAF only 28.5 remain air-worthy today. Discounting the obsolescent fleet of the MiG 21 as also other ageing aircrafts, the IAF is left with around 22 combat worthy squadrons.

At Aero India 2011, apart from the Su30 MKI display by IAF, rest of it turned out to be nothing more than a vintage aircraft rally!
Moreover, after many years of trials and negotiations, the deal for 197 helicopters was thrown out of the window in the last minute. The tender for 126 MMRCA is languishing for the past eleven years and now runs into problems and complications with the unwieldy offset procedures and Transfer of Technology.When the NDA government was in power, India negotiated for forty Mirages 2000-V. After prolonged negotiations, when the time came to ink the deal, the then Defence Minister decided that he would sign it after the general elections. NDA coalition lost and the UPA government that came to power scrapped the deal. Similarly, a deal for In-flight Refuellers was negotiated over three years. When the deal was about to be inked, the Ministry of Finance suddenly declared that the tankers preferred by the IAF were too expensive. The tender was scrapped.

…without pausing for the mental lethargy of New Delhi, warfare technology has rapidly moved to pilotless or remote controlled vehicles and weapon systems on sea, land and in the air.

In the bargain, the vendors have lost millions of dollars on unproductive effort. Worse, the nation lost credibility in its international dealings and the Air Force its combat power.

With its overall capability severely eroded especially during the last decade, the IAF today no longer spearheads national military power. There is hardly any strategic or tactical airlift capability worth the name. The air defence cover supported by obsolete systems, is porous and there is only a token representation of force multipliers.

The state of the IAF prompted the Chief of the Air Staff to state publicly that fifty percent of the equipment in the IAF was obsolete. Clearly, the IAF is in no shape to support power projection by the nation or to confront its two main adversaries that are rearming and modernizing rapidly.

Beijing and Islamabad are delighted with New Delhis clumsy response.

On the other hand, DRDO and the indigenous aerospace industry continue to devour precious resources that the nation can ill afford but have proved totally incapable of making the nation self reliant in respect of contemporary military hardware.

Global tenders for even desperately needed military equipment remain bogged down in the complex bureaucratic labyrinth of the Defence Procurement Procedure. Ineptitude and apathy of the government is usually cloaked in fiery rhetoric that routinely emanates from the top echelons of national leadership and genuine modernization programmes continue to remain a distant dream.

For the past twenty-five years Ministry of Defence has found itself incapable of finalizing the induction of 155 mm guns for the Regiment of Artillery. The Kargil war was barely managed through extensive cannibalization just to have a few guns firing.

MoD floats tenders and cancels them with an unbelievable regularity.

The Indian Army’s Combat Arms are in a state of crises because of obsolete equipment that was not replaced in the last sixty years.

Pakistan forces equipped with night vision devices will be sitting behind blind Indian mechanized forces since modern wars will be fought largely at night.

Ground based air defence practically is non-existent and devoid of Control and Reporting (C&R) System. Further, air defence is in shambles as L-60 and L-70 guns are of WW II vintage. On the other hand, the Schilka self propelled guns, SAM and OSA-AK missiles are of early 70s vintage. Not a single gun and missile has been acquired since then.

The Infantry soldier fights with a WW II carbine while the terrorist is equipped with AK-47. DRDO has been kept in business by funneling taxpayer’s resources but INSAS rifles and LMG have not proven successful. FINSAS (future infantry soldier as a system) is yet to take off. DRDO continues to copy ideas from the brochures of the western firms, guzzling huge defence budgets, but is unable to produce a simple CQB weapon like a carbine! Communications systems remain antiquated. Fifty percent of the infantry is yet to be equipped with Individual Combat Kit (ICK).

The Navy will be left with nine operational submarines by 2012 against the stated requirement of thirty. Keeping in view the precarious position, I wonder what stopped New Delhi from ordering in a single stroke twelve submarines from the French and simultaneously opening a second submarine manufacturing line with another vendor. The laborious and complicated process of vetting tenders and negotiations provided adequate data to replenish the dwindling submarine resources at one go. Once again, we start this time-consuming tedious process to appoint a second vendor.

The shambles in which the Army, Navy and the Air Force find themselves today tantamount to dereliction of duty by the State, which in turn poses threat to the unity and integrity of the Union.

Meanwhile, without pausing for the mental lethargy of New Delhi, warfare technology has rapidly moved to pilotless or remote controlled vehicles and weapon systems on sea, land and in the air. One can practically look inside the enemy’s house sitting in New Delhi and neutralize the emerging threat by firing a missile with the help of a remote controlled pilotless drone.

We are nowhere near use of such magnificent technologies in spite of the favorable opportunities that exist in the new geopolitical environment.

Technological innovation earlier took a decade to develop. Warfare technology now can be out of date within a year. It is a distinct possibility that with the rapid pace of technological advances in warfare, by the time 126 MMRCA deal is finalized, much of the technology offered by OEMs may be out of date.

With diminishing or ageing population, the West perforce depends more and more on technology. However, as in Libya or Afghanistan unless cutting edge technologies are employed together with sufficient boots on ground, the situation is likely to result in a stalemate.

Luckily, India boasts of young demographic profile in abundance that is sufficiently tech savvy. Yet there is huge shortage of young officers as the government is not willing to give that extra incentive to lure them for a spell of short service commission. This creates vacuum in cohesion at the junior level, so vital to lead the troops.

…with the rapid pace of technological advances in warfare, by the time 126 MMRCA deal is finalized, much of the technology offered by OEMs may be out of date.

When one adds equipment shortage to it, the Indian Army, the Navy and the Air Force are unequal to the task the nation expects them to execute incase push comes to shove.

China and Pakistan’s support to insurgents, Maoists, and dissident groups within India is well documented. Therefore, internal and the external threats are interlinked and require seamless integration between the Civil and the Military.

Despite the grave threat posed by external forces against the Union, the Civil Administration is unwilling to swiftly equip the military with requisite young human resources or the latest technology to cope with the growing security challenge.

Nor the Civil Administration is eager to beef up its own weakening sinews by lateral induction into the civil segment, forty thousand highly skilled young soldiers (and officers) released each year by the Armed Forces

Induction of trained manpower from the military and merger of the military skills with the Civil Administration can be the game-changer effecting increased efficiency.

Induction of personnel equipped with military skills will not only boost the ability to reclaim territory lost but also help to hold the ground subsequently, lest Maoists or insurgents attempt to stage a comeback. Simultaneously, it will dramatically lower the ageing profile of Army, Navy and the Air Force, which is an operational necessity.

This arrangement is a win-win for Civil and the Military.

The shambles in which the Army, Navy and the Air Force find themselves today tantamount to dereliction of duty by the State, which in turn poses threat to the unity and integrity of the Union.

Surrounded by authoritarian regimes, and located within the arch of Islamic terrorism, the Union of India is possibly the largest social experiment in diversity in the 21st century. To keep the Union intact, therefore, it not only requires reversing the swiftly shrinking military capabilities but  a degree of militarization of the pacifist Indian mind as well