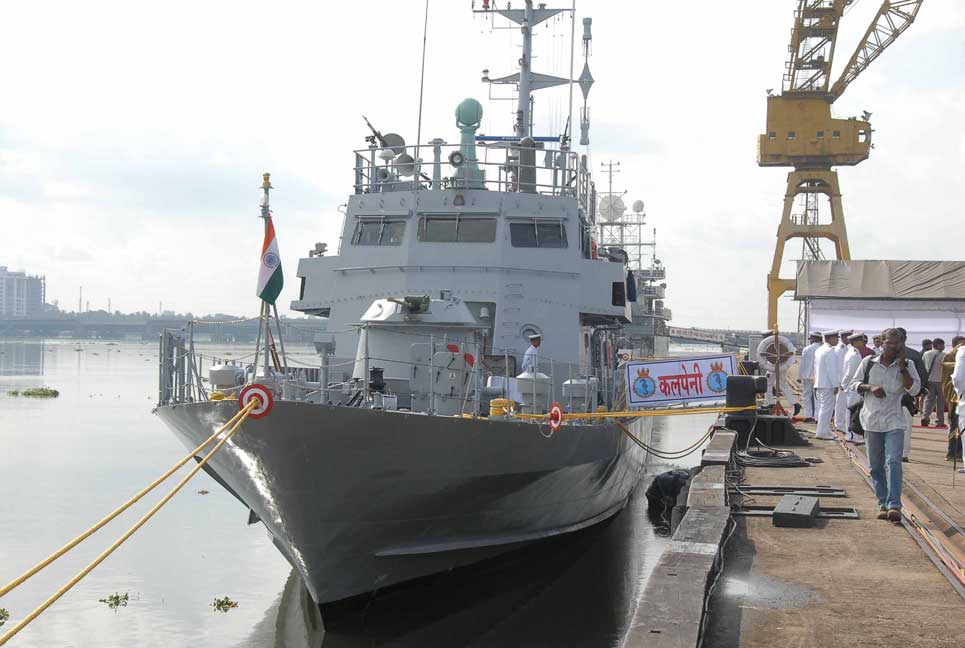 Towards the end -1980s, word started trickling out of the USSR of an unusual experiment being undertaken by the Morskaya Aviatsia, the air arm of the Soviet Navy. Having shed their dogmatic animus of many years to flat-tops, the Soviets were planning to make a dramatic entry into the arcane field of carrier aviation. They planned to shun the trodden path and do this through the medium of ski-jump equipped carriers. But what about the flying machines?

With the Vikrant getting on in years, there was serious concern in the IN that having constructed our operational and tactical doctrines around carrier aviation, we may, one day find ourselves without a fixed wing platform at sea.

Having realised the limitations of their VTOL endeavours, they chose three (conventional) shore-based combat aircraft and undertook extensive modifications to enable ramp take-offs and hook-assisted “arrests” on board. The aircraft chosen were the Sukhoi-25 (trainer and strike aircraft), the Sukhoi-27 and the MiG-29. The modified versions of the aircraft were given the suffix “K” (for Korabelnyy or ship) and this mode of operation added a new term to the lexicon of naval aviation: STOBAR which stood for “short take-off but arrested landing”.

With this development, our carrier design options began to acquire some clarity, and the Staff Requirements having been reviewed, the designers returned to the drawing board. However, the continuing uncertainty about aircraft availability, made their job difficult, and the first tentative design that emerged was for a 20, 000 ton carrier named euphemistically the “air defence ship” or ADS, (partly to camouflage it from air force snipers). The ADS would operate the Sea Harrier (already in our inventory) and hopefully the indigenous LCA whose ship-borne version was being explored.

However, a detailed feasibility study of a STOBAR version of the LCA by its design bureau revealed that a safe ski-jump launch and arrested recovery, though feasible, would make extra demands on this radical little strike-fighter. Although equipped with a digital flight control system, the delta wing configuration of the LCA (Navy) would require higher take off and landing speeds. Consequently the deck length had to be increased by about 15 meters, and the redesigned ship now displaced 24,000 tons, with a corresponding increase in cost.

By now the IN was seriously examining the Russians offer of their 1980s vintage helicopter/VTOL carrier Admiral Gorshkov, and a choice had to be made of a suitable aircraft. The obvious options were the Su-33 (a derivative of the Su-27K selected for operation from the 67,500 ton carrier, Kuznetsov), and the Mig-29K. An evaluation revealed that both aircraft would meet our operational requirements. The Su-33, though more capable, being dimensionally larger would not only not fit in the smaller hangar of the 44,500 ton Gorshkov, but would have marginal wing-tip clearances from the island structure during deck launch. It was, therefore, decided that the Mig-29K would equip the Gorshkov, to be renamed   INS Vikramaditya, once it entered Indian service.

The downstream impact of this decision was instantly felt by the ADS programme, and a fresh design exercise was initiated to assess the implications of MiG-29K STOBAR operations on the ADS design. According to the planners, the ship’s basic complement would be a squadron each of MiG-29s and assorted helicopters. The option of operating the upgraded Sea Harriers was also catered for, till the LCA (Navy) received its full operational clearance. The workshops, magazines, deck and lift configurations as well as crew spaces had to be re-worked.

The staff requirements having been finalised in 1999, the ADS emerged, in its definitive form, as a 37,000 ton vessel, to be powered by four LM-2500 gas turbines in COGAG arrangement which would give it a top speed of 28 knots. The 830 foot long angled flight deck would have a set of three arrester wires aft rated to handle aircraft of up to 22 ton all-up weight. A set of jet blast deflectors and hydraulic chocks would be installed to provide a 600 foot deck run for launch of the Mig-29K and LCA (Navy), from the 14 degree ski-jump launch using afterburner. The ship would carry an air group of 30 aircraft and helicopters and would be crewed by about 1400 personnel.

As a practicing adherent of ship-borne aviation for the past 45 years, the IN aims to fulfill its long- term operational commitments in the IOR by deploying two carrier task forces at sea…

The project having received financial approval of the Government of India in January 2003, and first steel was ceremonially cut in Cochin Shipyard Ltd on 11th April 2005, when the ADS was re-designated as the “IAC” or Indigenous Aircraft Carrier.  Consultancy for propulsion system integration will come from M/S Fincantieri of Italy (now in the final stages of completing the Italian carrier Count Cavour), and for the aviation complex from M/S Nevskoie Design Bureau of Russia.

Some early problems relating to ship-building steel and selection of equipment have been resolved and the yard is optimistic about meeting the delivery schedule of 2012-13. There are no illusions that this is going to be a complex undertaking, and on account of certain residual imponderables the shipyard plans to execute the contract in two phases. It is expected that the uncertainties, especially those relating to equipment that needs to be imported would have been resolved by the time work starts on Phase II. The financial estimates for the IAC have, therefore, remained somewhat flexible so far.

As a practicing adherent of ship-borne aviation for the past 45 years, the IN aims to fulfill its long- term operational commitments in the IOR by deploying two carrier task forces at sea, while a third ship is under maintenance or refit. This would be the embodiment of a concept mooted in our plans as far back as 1948.

The arrival of the Vikramaditya and her squadron of Mig-29K fighters in 2008 would certainly add considerable combat power to the IN, and the Service looks forward to the IAC joining the fleet in the next decade. However, while we take up a case for construction of a second IAC, we would need to assess the residual life of the sturdy old Viraat.

Building an aircraft carrier for the first time is no doubt going to be a challenging task for India’s warship designers and builders.  The commissioning of this ship in the next decade would be not only be a defining event for our industry but also a concrete manifestation of the determination and resolve with which we have pursued the vision of becoming a “Builders Navy”.

2 thoughts on “India’s Quest for an Indigenous Aircraft Carrier”