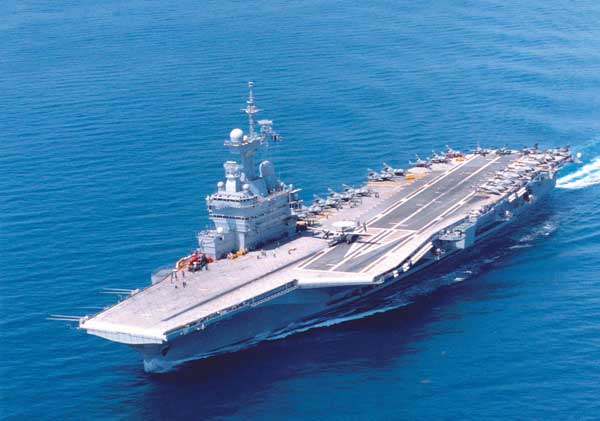 It was indeed fortuitous for our navy that at the moment of India’s independence, those charged with planning for the nation’s embryonic maritime force included many men of vision. In 1948, within six months of freedom, a ten year naval expansion plan had been prepared, largely by Royal Navy officers serving on secondment, for consideration by the Government of India.The plan was drawn up around the concept of two fleets; one for the Bay of Bengal and the second for the Arabian Sea, each to be built around a light fleet carrier, to be replaced subsequently by a fleet carrier. The grandiose scheme provided for four fleet carriers and 280 ship-borne strike and fighter aircraft in the next few years. This plan received approval in principle from the Governor-General Earl Mountbatten, as well as the Prime Minister of India Jawaharlal Nehru, but unfortunately failed to materialise because of a variety of reasons.

The Royal Navy, which saw her naval aviation being virtually dismantled, was mirrored to an extent in India. The RN had been deprived of both fixed wing carriers and aircraft; the IN had a small carrier but could not find a new aircraft that was compatible.

Hostilities with Pakistan in Jammu & Kashmir in the winter of 1947 had focused India’s attention on the Himalayas rather than the oceans and the young nation’s scarce resources were being diverted to the army. Moreover, the outbreak of the Korean War in 1950 required all WW II naval aviation surpluses of the RN to be marshalled once again for service, and there was not enough to spare for the Indian Navy (IN).  However, the main impediment that emerged was a change of heart in His Majesty’s Government.

The reason why the British were willing to help bolster India’s naval strength was the basic assumption that the IN would form part of a Commonwealth-based bulwark against any possible depredations by the Soviet “Bear” in the maritime domain (perhaps looking for warm water ports?). However, by now India had decided to adopt an equidistant non-aligned stance between the two “cold-warriors” and her steadfast refusal to be part of any military alliance considerably dampened RN enthusiasm and support.

Arrival of the First Carrier

The dire financial straits of the fledgling nation also posed many hindrances to the planning process for creating a navy, but the carrier project eventually survived, albeit in a drastically diluted form. In 1957, the unfinished hull of HMS Hercules, a Majestic Class light fleet carrier was acquired by India and taken in hand for completion in Belfast. Four years later she was commissioned into the IN as INS Vikrant. Sister ships served in the Canadian and Australian Navies for some years.

The aircraft complement of Vikrant was essentially a Hobson’s choice, and consisted of the Armstrong-Whitworth (later Hawker-Siddley) Seahawk, a straight-wing, first generation ground-attack jet fighter, and the French built Breguet Alize turbo-prop ASW machine. Both the aircraft served us faithfully, but by the late 1970s they were long in the tooth and needed urgent replacement.

The Royal Navy’s dilemma arising from the defence White Paper of 1966, which saw her naval aviation being virtually dismantled, was mirrored to an extent in India. The RN had been deprived of both fixed wing carriers and aircraft; the IN had a small carrier but could not find a new aircraft that was compatible.

The one single factor that led to the resurrection of the fleet air arm of the RN was the, “discovery” of the ski-jump by a young engineer named Lt Cdr Taylor.  It was only with the ski-jump installed on board that the small “through deck cruisers” of the Invincible class could become viable STOVL (Short Take-off Vertical Landing) platforms. We joyously followed suit, and the first IN Sea Harrier FRS Mk. 51 was vertically landed on the deck of Vikrant, off Goa by the author in December 1983.

Apart from the operational penalties, what our planners dreaded most was the inevitable loss of flying and other expertise, painstakingly built up over three decades of shipboard aviation at sea.

In the hot and light wind conditions of the Indian Ocean, undertaking Short Take-off operations from the flat deck of Vikrant in a Sea Harrier (with one outrigger on the catapult track) always remained an “exciting” event, especially by night. There was much relief in the aircrew-room therefore, when she was fitted out with a 12 degree ski-jump by Mumbai Dockyard in 1985. The range and payload of the Sea Harrier received a much needed boost too.

Search for a Second Carrier

With the Vikrant getting on in years, there was serious concern in the IN that having constructed our operational and tactical doctrines around carrier aviation, we may, one day find ourselves without a fixed wing platform at sea.

Apart from the operational penalties, what our planners dreaded most was the inevitable loss of flying and other expertise, painstakingly built up over three decades of shipboard aviation at sea. Carriers were obviously not going to be available off the shelf and a serious thought process was triggered off in Naval HQ regarding the design and construction of an indigenous ship to meet our long-term needs.

The immediate scenario however, remained bleak till 1985, when we received an offer from the RN, for the sale of the 28,000 ton HMS Hermes. Laid down in WW II, this 25 year old ship had served the RN as a fixed wing, commando and eventually STOVL carrier. The offer was eagerly accepted, and after a refit in Devonport, the Falklands flagship (wrongly claimed to have been struck by an Argentinean Exocet) sailed for India as INS Viraat. She had a 12 degree ski-jump and was well adapted for STOVL flying operations. Some of us had already flown from her deck during the Sea Harrier conversion in Yeovilton.

Vikrant was finally de-commissioned in 1997, and the IN has since been operating with just the Viraat at sea, with her complement of Sea Harriers FRS MK.51, Sea King Mk. 42 ASW helicopters and the Indian built version of the Allouette III known as Chetak. Occasional visitors on board include the Kamov-28 (ASW) and the Kamov-31 (AEW) helicopters.

The Indian Navy’s small Directorate of Naval Design was in the 1970s, deeply engrossed in the exciting maiden venture of licensed production of Leander class frigates being undertaken by the Mazagon Dockyard Mumbai. From time to time, they did however, toss about various aircraft carrier design options and a concept for the conversion of a passenger ship hull to a “flat-top” was briefly examined in 1979-80, but  discarded since it received no encouragement from any quarter.

As a practicing adherent of ship-borne aviation for the past 45 years, the IN aims to fulfill its long- term operational commitments in the IOR by deploying two carrier task forces at sea, while a third ship is under maintenance or refit.

By 1987, the IN had persuaded the government to approve the commissioning of a concept study by Direction des Construction Navale (DCN), France of a sea control ship of about 25,000 tons, capable of operating aircraft in the 15 ton category. The DCN report received in 1989, covered two options; one of a conventional (catapult equipped) ship and the other of a ski-jump carrier, to be constructed at the Ministry of Shipping owned Cochin Shipyard Ltd. The report unfortunately came in at a time of financial stringency, and had to be reluctantly shelved by the IN.

However, the DCN exercise was not entirely futile because it gave a fillip and inspiration to our own designers, and concept designs, first of a simple 16,500 ton “Harrier-Carrier”, and then of a larger, more versatile 20,000 ton ship emerged from the Directorate. The factors and choices for size/configuration of the ship formed a rather complex matrix, and I will need to digress a little to dwell on them.

Apart from the dimensions of the hangar, the size of the propulsion plant, and capacity of fuel tanks and magazines, the most important determinant of carrier design is the flight deck, whose size and configuration depend on type of aircraft operations intended.

John F Lehman (former US SECNAV) in his book, Aircraft Carriers: the Real Choices, written in 1978, provides some very useful empirical data. Studies have shown that to operate all conventional high performance aircraft a deck length of 912 feet is required, and this would correspond to a displacement of about 60,000 tons. If heavier aircraft like the   F-14 were excluded, the deck length could be reduced to 813 feet with the ship displacing about 35,000 to 40,000 tons. Lower down the scale, a 650 to 700 foot deck would suffice for purely STOVL operations and the ship would displace about 20,000 tons.

In the 1980s and 90s, the choices of aircraft available to India were severely circumscribed on account of political considerations. Carrier-borne aircraft of US origin, by far the most capable in the market, were then just not available to us. The Soviets, our main purveyors of military hardware at that time, had only one shipboard fighter – the three engined VTOL fighter Yak-36 (Forger) to offer, but experience showed that the Sea Harrier, already in our inventory, was superior in most aspects. And then there were two more options, both at different stages of development: the French Rafale-M shipboard fighter and the Indian designed Light Combat Aircraft (LCA).

However, at the end of all our studies, one factor emerged clearly: aircraft catapults were manufactured only in the USA, and since this piece of machinery was unlikely to be available to India, we could discard ship designs which were based on conventional aircraft requiring a catapult launch. This eliminated all US origin deck aircraft as well as the Rafale as viable options. Since we had already decided that the Yak-36 did not have much merit, our ship designers were placed in limbo once again. This is when the ingenuity of the Russians came to our rescue.

2 thoughts on “India’s Quest for an Indigenous Aircraft Carrier”