We claim that a penta-polar world is emerging. We also claim that, “To be there in 2030-2035, India needs to play out the penta-polar world dynamics through a multi-alignment strategy backed up by a future narrative of her own, even though she will continue to be the playground as well. Above all, India should minimise the probability of becoming the playground of the great game. The only way India can do so, is by being a player of the global power game. It is time to be the pole.”[1]. What should India do to become a power-pole in the penta-polar world? What exactly is the penta-polar world? How other possibilities of evolving world order will play out in this decade? How should India design her economic growth to rise and yet also ensure comprehensive national security and protection of its national interests around the globe? These are important questions to discuss.

Through an in-house developed methodology that we call Exploratory Design of Strategy combining the scenario planning methodology with general morphological analysis[2] providing deeper understanding of the strategic decision complexity, we provide potential directions to the above questions. 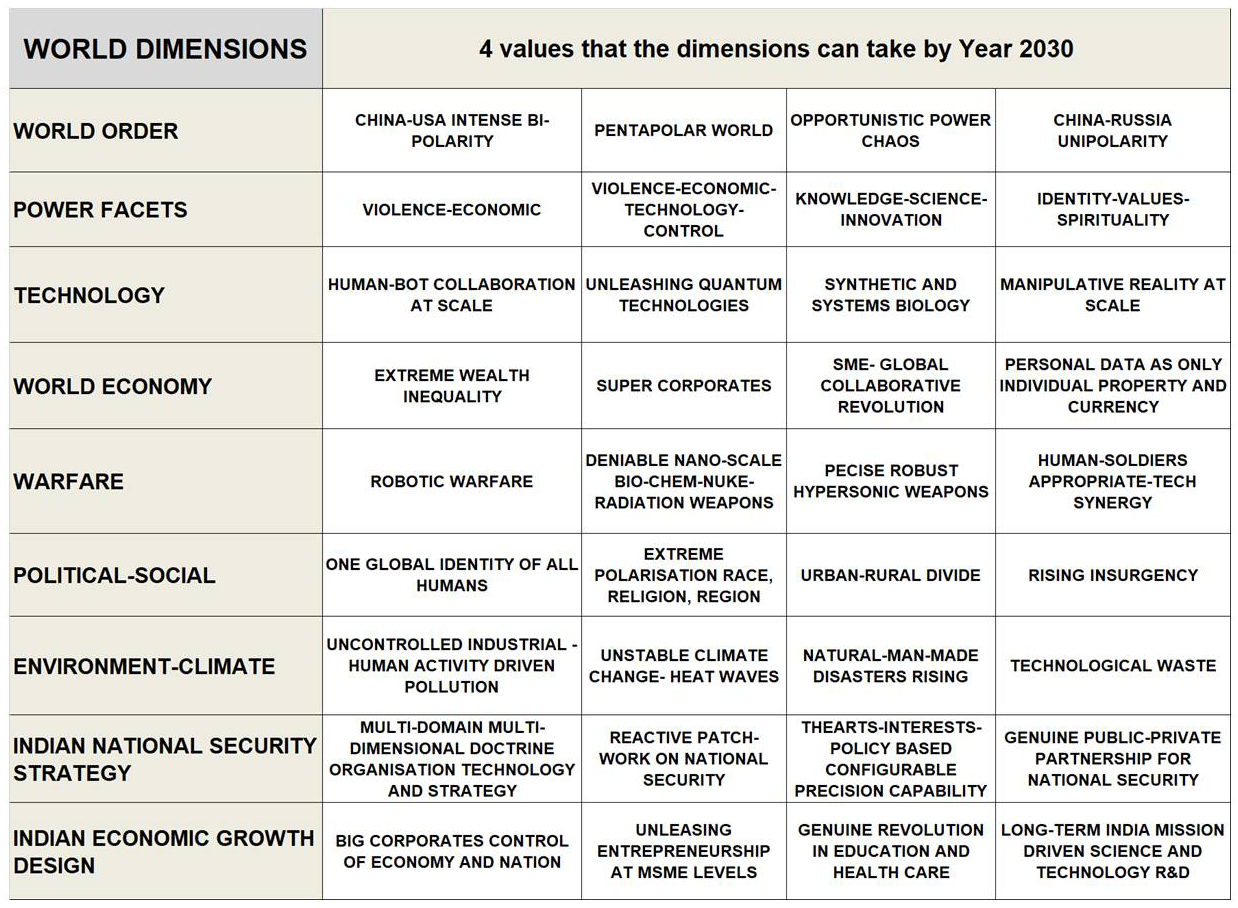 The Key Dimensions of the World Evolution

The first step in our methodology is to establish the key lenses through which we can view the evolutionary changes of the world at large. We present these lenses as seven dimensions – World Order, Power Facets, Technology, World Economy, Warfare, Political-Social Factors, and Environment-Climate Change Factors. Further, we define four potential paths or trends that each dimension can move along through this decade. Table below gives the 7×4 Matrix as possible by 2030.

As one can see this matrix provides us (4) 7 possible futures taking all combinations into account. If we select a specific value on each the dimension as the trend of future (2030 scenario) we get 16,384 possible scenarios through these combinations. Using our methodology of exploratory design of strategy one can study these alternative future scenarios. 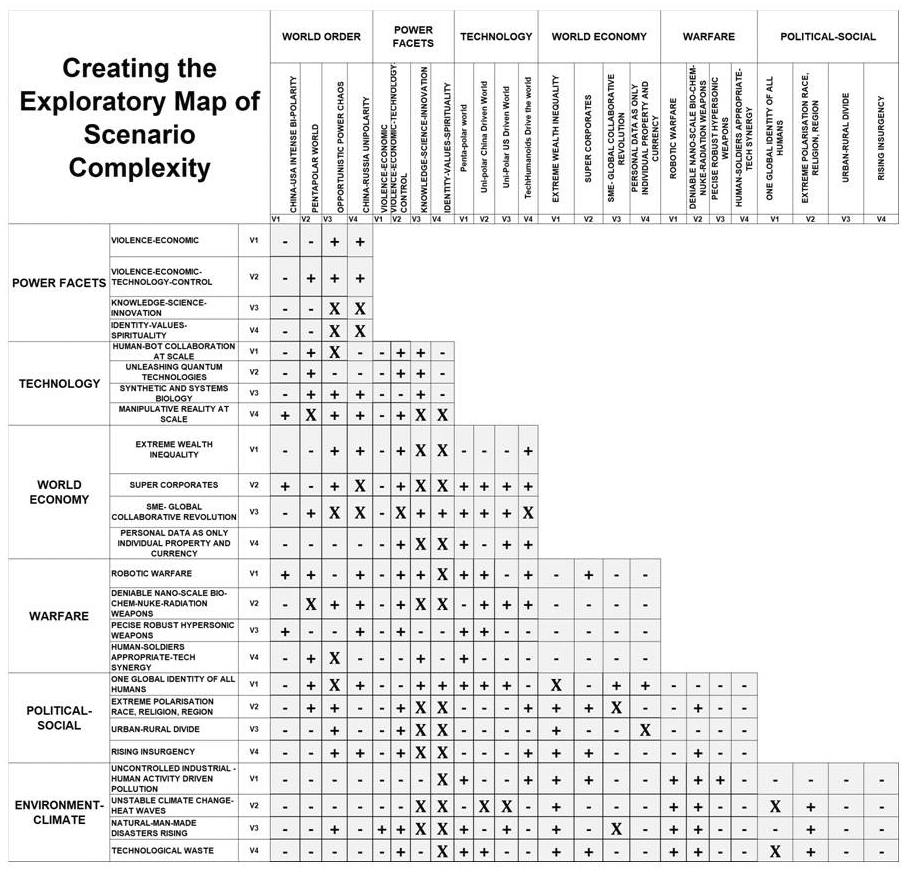 To study these alternatives, we analyse each of these values under the seven dimensions to see if certain values in one dimension are consistent with specific values of other six dimensions. We consider three possible relations between the inter-dimension values. Synergy (+) indicates that the two values – which in a way are possible directions that dimension may take ahead – selected in the scenario enhance the possibility of gaining strength for each of those trends. That means together if these two trends are chosen, they feed into each other by enhancing each other’s intensity or speed. Neutrality (-) indicates that the two trends indicated as values in the dimensions do not have any direct impact on each other and may be chosen together as they exist independent of each other. Constraining (x) relation between the values indicate that the two trends either slow down each other, cannot happen together or reduce the intensity of each other to a great extent. Using the above scheme, we did pair-wise analysis and categorisation of each of these trends. The picture is as shown. As one can see the blue cells are the neutral cells, the red cells with x marks indicate the constraining relationships and the yellow cells with + marks indicate the synergy between the trends. The exploration map is considered as the ground-truth for our analysis ahead. That means, this picture is taken as established relationship between various values of each dimension through the next decade. The inputs are judgmental and can be changed based on multiple experts working together in a group setting.

Similarly, for our scenario let us say we select human-bot collaboration at scale for technology dimension. For the world economy we select that it is driven by few super corporates and say warfare character is driven by deniable nano-scale bio-chem-nukes-radiation weapons, and so on. This way we can create one scenario of the future as shown. Let us call it Scenario X. Evaluating the consistency of the choices using our ground-truth established under the exploratory map we get the Scenario X picture as shown. It says, the penta-polar world order has synergy (+) with violence-economic-technology control-based national power as well as to evolution of technological world as human-bot collaboration at scale. The penta-polar world order is neutral (-) with world economy being driven by few super corporates or multi-national organisations. Interestingly, it is in conflict (x) with character of warfare shifting to deniable nano-scale bio-chem-nuke-radiation weapons. Extreme polarisation – race, religion, region also have synergy with the penta-polar world. It is neutral to uncontrolled industrial human activity driven pollution. Similar explanation can be inferred from the picture based on specific +, – or x in the row element corresponding to chosen dimension trend.

We can create another scenario – let us say Scenario Y – by selecting different values on some of these dimensions. Let us select penta-polar world order as is for scenario Y, but in this scenario, technology has been created to manipulate reality at scale. Also, the world is experiencing extreme wealth inequality. Furthermore, the character of war has become substantially robotic.

Let us now consider India’s options to design and develop the contours ahead for playing in penta-polar world as per Scenario X and Scenario Y. Although both of these are penta-polar world by 2030 scenarios, there are marked differences in the way specific values are chosen for the two scenarios. We define two dimensions for India – Indian national security strategy and Indian economic growth design. Following the same process as described above, we define four specific paths that India can take on each of these dimensions. 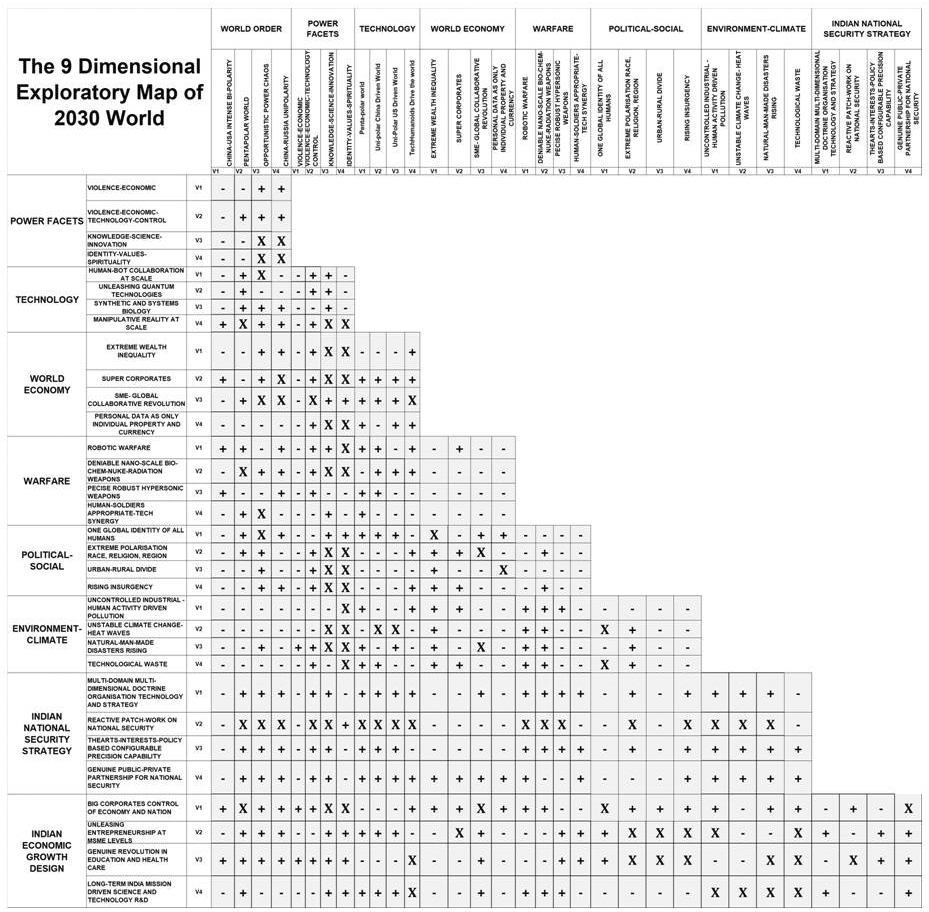 As we explained above, combining the two dimensions and the four specific paths that India can move forward on the two dimensions, we get 16 possible paths. Using the nine-dimensional exploratory map above, we can evaluate the 16 possible combinations for India in both penta-polar world scenarios X and Y. 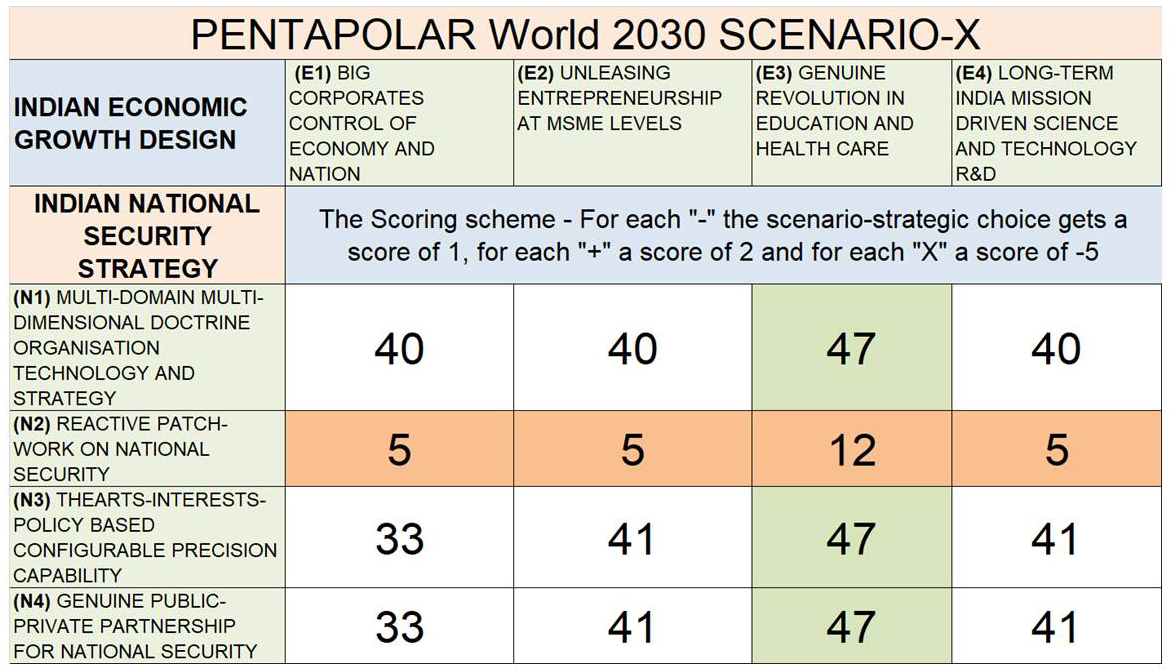 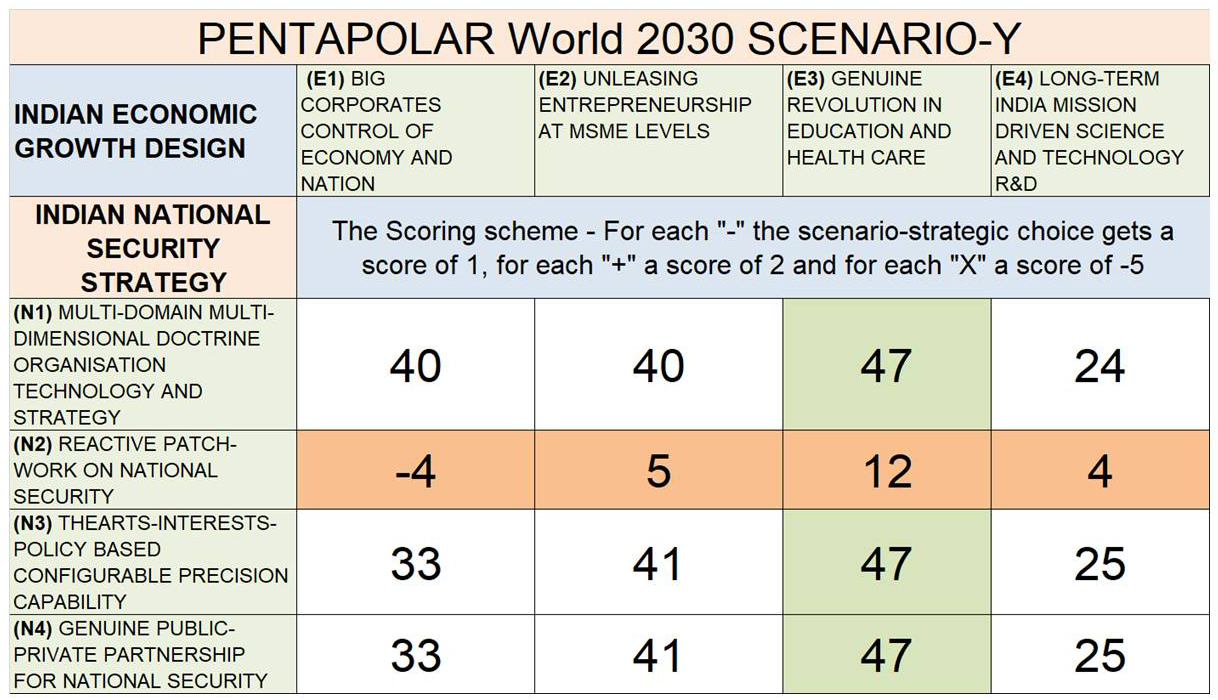 Using a new methodology of combining the general morphological analysis and scenario planning, we have presented above possible scenarios of future world evolution on seven key dimensions. This framework can help us explore large scenario spaces through pair-wise comparisons of different trends on each dimension. Comparing the Indian evolutionary dimensions on national security strategy and Indian economic growth design, we have studied 16 possible options for India in two specified penta-polar world scenarios.

India will be well served by creating all efforts to revolutionise Indian education and healthcare systems. Above all, India needs to create a comprehensive national security strategy instead of depending upon the reactive patchwork on national security that we have been accustomed to so far in our journey as a nation.

In further work on this framework, we will be using the methodology to explore more global scenarios and will be publishing deeper evaluations on the forms of Indian national security strategies that can synchronise better with the evolving world scenarios.