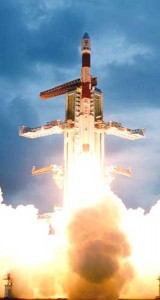 The point of MIP’s impact was near the Shakelton crater close to Moon’s South Polar Region. Weighing about 34 kg at the time of its launch onboard Chandrayaan-1, MIP carried a video imaging system, a radar altimeter and a mass spectrometer. The video imaging system took the pictures of the moon’s surface as the MIP approached the lunar surface. The radar altimeter measured the rate of descent of the probe and the mass spectrometer made a detailed study of the extremely thin lunar atmosphere.India joined the select band of six countries who have undertaken lunar missions by launching the first un-manned mission to Moon-Chandrayaan-1. In a historic flight conducted from Satish Dhawan Space Centre (SDSC), Sriharikota at 06:22 hrs on October 22, 2008, the Polar Satellite Launch Vehicle, PSLV-C11, successfully launched the 1380 kg Chandrayaan-1 spacecraft into a transfer orbit with a perigee (nearest point from Earth) of 255 km and an apogee (farthest point from Earth) of 22,860 km, inclined at an angle of 17.9 degrees to the equator. The Chandrayaan-1 spacecraft was successfully placed in the lunar orbit after a series of critical manoeuvres performed from ISRO’s Telemetry, Tracking and Command Network (ISTRAC) facilities at Bangalore. 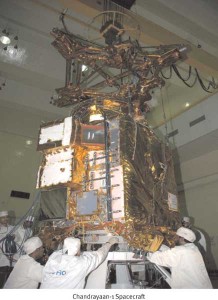 Vikram Sarabhai Space Centre at Tiruvananthapuram, the lead centre for the  development of launch vehicle, was responsible for the vehicle design, development of avionic systems, control and navigation software and a host of other sub-systems. Liquid Propulsion Systems Centre also at Thiruvaanthapuram was responsible for the development of liquid stages used in second and fourth stages of PSLV and also the liquid engine which propelled the Chandrayaan-1 spacecraft beyond Earth bound orbit. The liquid engine was operated ten times proving its reliability and robust design. ISRO Inertial Systems Unit supplied inertial systems such as gyros.PSLV is the trusted workhorse launch Vehicle of ISRO. During 1993-2008 period, PSLV had twelve consecutive successful launches.  During this fifteen-year period, PSLV repeatedly proved its reliability and versatility by launching 29 satellites (13 Indian and 16 foreign) into Low Earth, Sun Synchronous and Geosynchronous Transfer Orbits.  The launch of Chandrayaan-1 was the fourteenth flight of PSLV.

Moon : Moon is the nearest celestial body to the Earth and lies at a distance of about 3, 84,000 km from the Earth. It is the only natural satellite of the Earth and circles the Earth once in 27.3 days. Interestingly, the Moon also takes 27.3 days to spin around its axis.  Thus, one hemisphere of the moon, usually referred to as ‘far side’, cannot be seen from the Earth.

Though without atmosphere and devoid of liquid water, Moon is a world with surface features like mountains, plains, plateaus and lowlands, as on Earth.  But unlike the Earth, the Moon has millions of craters.  Formation and evolution of the Moon is of importance in understanding the history of our solar system, including our own Earth. 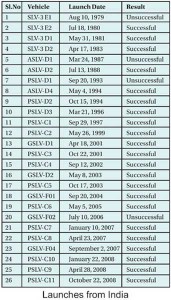 In the past five decades, though several missions, both manned (USA) and unmanned (USA, former USSR, Japan, China and the European Space Agency) spacecraft have explored the Moon, nevertheless, every important aspect of the Moon is still not known to humans or fully understood by them.  Thus, there are many secrets, which the Moon is yet to reveal.

These concern the origin and evolution of the Moon, understanding of its mineralogy. There is abundance of Helium-3, said to be a relatively clean fuel for the future nuclear fusion reactors. And, of course, there is presence of water ice in the permanently shadowed regions of the moon’s polar areas that excites the global scientific community.

Thus, from the point of view of human intellectual quest as well as in the context of the meeting the future needs of humanity, exploration of the Moon is very important.

Contemporary Missions: In the past few years, there has been a renaissance with regard to lunar exploration. Many countries and international space agencies, including the European Space Agency (ESA), Japan, China, the US and Russia have undertaken or in the process of undertaking unmanned exploratory missions to Moon.  These missions intend to seek answers to some of the fundamental questions that concern the Moon.  India’s Chandrayaan-1 is an integral part of that renewed interest of the international scientific community about the Moon. 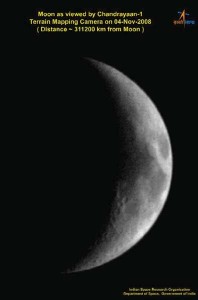 India in Space: Today, India is one of the very few countries that has significant achievements to its credit in the area of space.  Till now, 51 spacecraft have been built for India including Chandrayaan-1. These include communications, meteorological (weather forecasting), multipurpose, remote sensing and scientific satellites.  Of these, 27 have been launched from India itself. With adequate expertise and experience, with many successes in earth orbit in building, launching, maintaining and, more importantly, utilising a variety of satellites, ISRO then took up the challenge of Chandrayaan-1 – its first step beyond earth orbit into deep space.

Chandrayaan-1 is India’s first spacecraft mission beyond Earth’s orbit. It aims to further expand our knowledge about Earth’s only natural satellite, the moon. With well defined objectives, Chandrayaan-1 mission has put an unmanned spacecraft into an orbit around the Moon to perform remote sensing of our nearest celestial neighbour for about two years, using eleven scientific instruments built in India and five other countries.

The primary objectives of Chandrayaan-1 are:

Chandrayaan-1 aims to achieve these objectives through high-resolution remote sensing of the Moon in the visible, near-infrared, microwave and X-ray regions of the electromagnetic spectrum. A three-dimensional atlas of the lunar surface and chemical and mineralogical mapping of entire lunar surface will be prepared.

The Payloads: There are 11 payloads (scientific instruments) through which Chandrayaan-1 intends to achieve its primary objectives. They include five instruments entirely designed and developed in India, three instruments from European Space Agency (one of which is developed jointly with India and the other with Indian contribution), one from Bulgaria and two from the United States.  Thus, Chandrayaan-1 is an excellent example for international cooperation in exploring space. 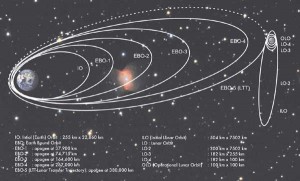 The spacecraft is powered by a single solar panel, generating a maximum of 700 W. A 36 Ampere-Hour (Ah) Lithium ion battery supplies power when the solar panel is not illuminated by the sun.  To make Chandrayaan-1 spacecraft escape from orbiting the earth and travel towards the moon, its Liquid Apogee Motor (LAM) is used. Liquid propellants needed for LAM as well as thrusters are stored onboard the spacecraft. Chandrayaan-1 spacecraft’s Dual Gimballed Antenna transmits the precious scientific data gathered by its eleven scientific instruments to Earth. 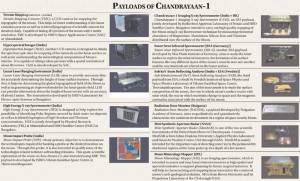 The Journey:  Chandrayaan-1 spacecraft was launched from Satish Dhawan Space Centre (SDSC) SHAR, Sriharikota by India’s Polar Satellite Launch Vehicle (PSLV) into an elliptical Initial Orbit (IO) around the earth.  The launch took place from the Second Launch Pad (SLP) at SDSC SHAR.  SLP was built to provide redundant facilities for launching PSLV and GSLV from Sriharikota.  This launch pad provides quick turnaround time for launches.  Besides the present PSLV and GSLV, it can accommodate future launch vehicles like GSLV-Mk III.

SLP works on Integrate, Transfer and Launch (ITL) concept, according to which the new launch pad and the associated facilities are designed and built.  First, the entire launch vehicle is assembled and checked-out on a mobile pedestal in a giant Vehicle Assembly Building (VAB) and then moved in vertical position to the launch pad on a rail track.  This method reduces the pad occupancy time.  At the same time, it enables the vehicle to move back to VAB for protection in the event of any cyclone warning.  The important facilities that constitute the SLP include:

After reaching space with the help of PSLV-C11 and circling the Earth in its Initial Orbit, Chandrayaan-1 spacecraft was taken into more elliptical orbits by repeatedly firing its Liquid Engine at appropriate moments. While traveling in such an orbit that extends up to 386,000 km from the Earth, Chandrayaan-1 spacecraft encountered the Moon at a safe distance of a few hundred kilometers.  At that time, its liquid engine was fired again so that the spacecraft slowed down sufficiently to enable the gravity of the Moon to capture it into an elliptical orbit. This feat of Lunar Orbit insertion, a very crucial manoeuvre, took place on November 8, 2008. Nearly one-third of the missions have been lost while attempting this critical manoeuvre. India achieved this rare feat of lunar orbit insertion in its very first attempt.

Following this, the height of the spacecraft’s orbit around the Moon was progressively reduced in steps.  After a careful and detailed observation of the orbit perturbations in those intermediate orbits, the orbital height of Chandrayaan-1 was finally lowered to its intended 100 km height from the lunar surface.

Later, the Moon Impact Probe was be ejected from Chandrayaan-1 spacecraft at the earliest opportunity on November 14, 2008 to hit the lunar surface in a chosen area.  Following this, cameras and other scientific instruments were turned on and tested.  Chandrayaan-1 spacecraft is expected to be in orbit for about two years during which it will explore the lunar surface with its array of instruments that includes cameras, spectrometers and SAR.

The Indian Deep Space Network performs the important task of receiving the radio signals transmitted by  Chandrayaan-1 that are very feeble by the time they reach the Earth.  Besides, it can send commands to the spacecraft at a power level of upto 20 kilowatts. IDSN consists of two large parabolic antennas – one 18 m in diameter and the other 32 m in diameter – at Byalalu, situated at a distance of about 35 km from Bangalore.  Of these, the 32 m antenna with its ’seven mirror beam waveguide system’ is indigenously designed, developed, built, installed, tested and qualified.  The 18 m antenna can support Chandrayaan-1 mission, but the 32 m antenna can support spacecraft missions well beyond the Moon.

The Spacecraft Control Centre, located near the ISTRAC campus at Peenya, north of Bangalore, is the focal point of all the operational activities of Chandrayaan-1 during all the phases of the mission. 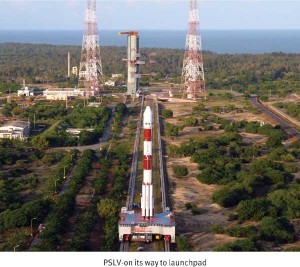 Chandrayaan-1 is the most challenging endeavour of ISRO in exploring space.

Cost of Chandrayaan-1 mission is Rs 386 crore and this includes Rs 100 crore for the establishment of Indian Deep Space Network. The DSN facilities meet the requirements of not only Chandrayaan-1 but also future inter planetary missions.

All the payloads have been switched on and are working satisfactorily. Excellent quality imagery of the lunar surface of both nearside and far side have been obtained by Terrain Mapping Camera (TMC) and Hyper-Spectral Imager (HySI) cameras. Chandrayaan-1 has successfully demonstrated the country’s capability and expertise in accomplishing highly complex space missions. The success of Chnadrayaan-1 has paved way for undertaking missions to Moon and beyond.