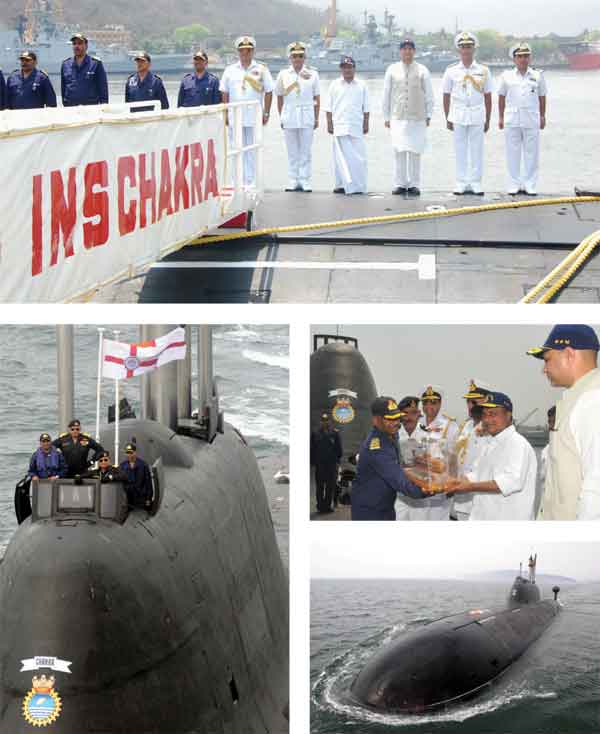 Induction of the INS Chakra

The post-war process of de-colonisation which began with the independence and partition of India, brought forth numerous newly, independent nations in Asia and Africa. It also resulted in the phased withdrawal of the British Royal Navy from bases around the Indian Ocean, leaving it for the first time in nearly two centuries without a dominant sea power. After the mid-1950s, the Indian Ocean was no longer a “British Lake”.

The emergence of communist China in 1950 and its subsequent phenomenal economic growth is altering the balance of political, economic and military power in Asia and the world. India retains bitter memories of the 1962 border conflict with China, and its role in nuclear weapons proliferation to Pakistan, and between them to North Korea, Iran and Libya. Many Chinese actions, such as attempts to acquire a maritime presence in Myanmar, have strategic implications for India’s security. At the same time, both countries are conscious of centuries old fruitful contacts and peaceful exchanges between two great civilisations and are trying to normalise relations and increase economic cooperation. Together with the maturing of ASEAN, there is now a new mood of economic cooperation and growth in Asia.

The Afghanistan War gave a tremendous boost to Pakistan and US-Pakistan military relations – yet again! Generous US aid flowed, including naval vessels, P-3 Orion aircraft and weaponry unconnected with the Afghan war. The war, through a series of complicated events, eventually led to the re-unification of Germany and the dissolution of the Soviet Union. It also planted the seeds of terrorism against the USA and in a twist of strategic irony, the entry of US troops in Afghanistan to fight the old Soviet enemy, the Taliban! Which raises the question – is there any room for morality in international affairs or are they to be conducted solely on the basis of perceived, short term national self-interest, as myopically seen through the eyes of self-serving politicians or military dictators?

The September 11, 2001 terrorist attack against the United States, symbolised in the collapsing twin towers of the World Trade Centre in New York, has brought about the most far-reaching recast of US foreign policy since the Cold War. The western alliance system, led by the United States, is again trying to re-order global power structures in a New World Order, much as was done in 1945 at the end of the Second World War on the basis of “Victors’ Spoils” and in preparation for the looming Cold War. It is being shaped to take into account new economic realities and the accompanying shift in political power in international affairs. War no longer remains an option for developed countries except against weak and undeveloped ones. Prosperity in Europe and America and increasingly in South-east Asia has in any case reduced the desire and necessity to fight for territory and resources. Economic competition is the new battlefield and cooperative prosperity the direction, to the extent feasible.

Re-evaluation of US strategic concerns following “9/11” has changed US attitudes towards India, which it now describes as a strategic partner, not least because of its growing economy and stable democracy. It is also related to India’s geographic situation astride Indian Ocean trade routes and maturing naval and technological capability. Instead of thwarting it as a matter of policy, the USA now seeks to accommodate, even encourage India’s aspirations for a larger role in world affairs despite its refusal to accept a discriminatory international nuclear regime, though not without quid pro quo.Past US-India Estrangement

There is a long history of estrangement between the USA and India and a residue of mutual suspicion and hesitancy. How successful will be the attempts at rapprochement and how durable?

India followed an incomprehensible maritime investment policy for decades, bearing the stamp of a landlocked accountant bureaucracy. Entrepreneurship was stifled in the shipping industry. Ports were allowed to decay and wallow in inefficiencies. Shipbuilding remained stunted due to taxation policies.

The USA has comfortable strategic understandings only with countries having cultural commonalities like the UK, Canada, Australia or New Zealand, namely cultures rooted in the “mother country”, England.

South Africa was part of this group until the white racist regime yielded power with the end of apartheid. Others, like South American, west Asian or Pakistani dictators have enjoyed favour from time to time, so long as they served US purposes. Japan has had a long term treaty relationship due to its usefulness against the Soviet Union and now to counter China. India would do well to remember that all US international relations, as indeed of all countries accustomed to power, are based on hard self-interest without the sentimentality to which India is prone.

The USA now has no strategic equals, nor is it institutionally accustomed to dealing with other nations on an equal basis, despite public posture of democracy and freedom. India needs to welcome US initiatives for better strategic understanding, without having any illusions about their, depth, content or durability. This applies equally to new initiatives with China, Iran or Saudi Arabia. All the lessons of history suggest that India approach the shaping of a new world order with traditional caution and circumspection, without exaggerated expectations and mindful of not sacrificing its independence of action for uncertain gains; whether from the nuclear agreement with the USA or the oil-gas dialogue with Iran. Both have a reputation for unilateral, arbitrary action, but the USA at least has a liberal democratic tradition, not always evident in its international dealings. Iran on the other hand, is often seen acting on the whims of clerics and religious hardliners and engaging in avoidable confrontations. Any agreement, whether with the USA or Iran, should be without illusions. As Charles De Gaulle had observed – “Treaties are like young girls and flowers – they last while they last”! The same applies to strategic understandings.