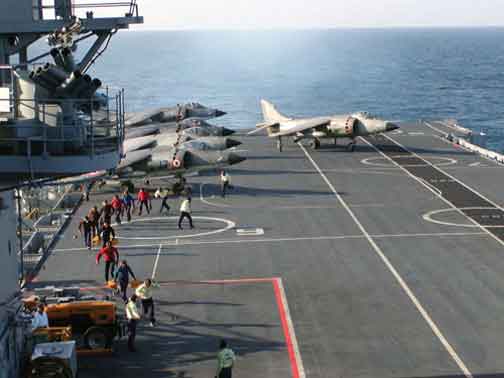 Much has been made about India’s naval expansion. It has been touted as an important instrument of maritime power projection across the IOR- region and hence the harbinger of India’s arrival into a world untrammeled by the suffocating conflicts of the sub continent. In the next few decades we expect the Indian Navy to expand at an unprecedented pace adding weapons platforms and budget headings as it goes along.

However, this expansion raises a few questions about how India perceives herself and her own geopolitical position. Is India a maritime state or a continental power? Are we ignoring the army at the altar of the navy and its glamorous neo-Mahanism? Is the balance of threat out at sea or can it be found closer to our land borders?

In my opinion, India is a continental power. Her very existence is based upon land forces. Historically it has always been so, as the army has been the prime instrument of fighting off both external and internal enemies. As a corollary of this I can surmise that the decisive battles of India’s future will be fought on land.

History is the repository of man’s trials and triumphs. In the mid 19th century, France had the second largest navy in the world. It also had a formidable army that had fought numerous campaigns ranging from the Crimea, to Algeria and even Mexico.

However, in 1870 she was invaded by Prussia and brought to her knees. The French navy watched on helplessly as the Prussians crossed the Rhine, destroyed the French army, captured the Emperor, besieged Paris and ended the second French empire. The Prussians and their Germanic allies had no navy to speak of beside some second rate gun boats. What they did have was a superbly organized land army with excellent artillery and a better understanding of geographic realities.

The impressive blue water fleet that had cost millions of Francs had absolutely no impact on the land war. On the contrary, it had diverted a sizable chunk of funds away from the army.  The moral of the story is that a nation with exposed land borders must first have an excellent terrestrial military force and only then can it focus on developing a blue water fleet. Having a Mahanian style navy may be good for England or the US or even Japan, but not for a country that has 7500 kilometers of exposed borders like ours. It has to be noted that pre 1939, the US and Great Britain usually maintained a very small peace time army, preferring to lavish funding on the navy. This is perfectly suitable to their geographical positions, but one must acknowledge that our own location is qualitatively different.

The International Relations(IR) terms of Balance of Power (BOP) and Balance of Threat (BOT) are integral to any discussion on Geopolitics. However, in our case we must also consider the Balance of Consequences (BOC) of a military defeat at the hands of our neighbors (No need to mention who they are).

We can survive a defeat at sea, but not one on land. That could be an existential threat to the union of India. At the very least, It could lead to an irrecoverable loss of territory. History of post 1947 India clearly shows that India has rarely ever managed to recover lost ground be it in Aksai Chin or elsewhere. The only solution to this lies in not losing ground in the first place. For that we need a strong army. And the best way to achieve that is through effective artillery.

250 years ago, Frederick the Great said that ‘Crowns are won with Cannons’. Guns were the ‘Final argument of kings’, and ‘The supreme arbiter of conflicts’. Not much has changed. From inflicting around 15% of all casualties during the Napoleonic wars, cannons accounted for up to 70% of combat losses during the First and Second world wars. Yet today the Indian army is significantly anemic in this field. In the trudging warfare of the Himalayas or the wars of limited movement in west Punjab, artillery and rockets are kings.

Infantry movements are suicidal without adequate suppressive fire and frontal assaults will be nothing more than acts of self immolation. The introduction of precision guided munitions like ‘Excalibur’ will make artillery an even more effective killing machine as howitzer shells attain unprecedented accuracy.  Von Schreff’s prediction of ‘The empty battlefield’ is becoming increasingly manifest as wars of the future attain the shape of massive counter-battery duels, where concentrated masses of men and machines are nothing more than juicy targets for the enemy’s artillery.

In this environment, should one not be concerned about the firepower of the Indian Army? The ongoing naval expansion and the prescribed artillery up-gradation have one thing in common. The need for huge amounts of capital. Are we diverting funding from the artillery (An existential need) to a blue-water fleet (A luxury)?

Once again, history offers the answer. Between 1899 and 1911, Imperial Germany was obsessed with Mahanism. Both hawks and doves from the Second Reich advocated a blue water ‘High Seas Fleet’ that could bring Germany on equal footing with Great Britain and allow her a way to escape the stifling bounds of mainland Europe.

The Germans sunk huge amounts of funds into the navy and ignored the army. In doing so they lost track of the basic geographical reality of Germany being a continental power having long land borders and belligerent neighbors. Within a few years they had the second largest fleet in the world.

However, the army remained the same as it had been in 1899. It was only with the First Balkan war of 1912 that German observers realized how far behind their land forces had fallen. They severely curtailed naval spending, choosing the army instead. Between 1911 and 1914 they added specialist units, communications systems, reconnaissance aircraft, engineering detachments, zeppelins and observer balloons at a breathtaking pace. But most of all they added cannons.

In only three years they designed, built and introduced thousands of guns. They were quite ruthless at it; where their own designs fell short they shamelessly copied French designs. So much so that no army at the outbreak of the First World war could boast of a better artillery service. As the war dragged on, these guns did more to win battles that the entire German navy, who’s only contribution was a single indecisive engagement at Jutland (1916). Three years of artillery up-gradation had surpassed 12 years of naval expansion. Cannons had quite literally provided the Germans more bang for the buck. One can only imagine the outcome of the Great War, had Germany balanced naval expansion with artillery up-gradation during those 12 years.

Some might argue that the Indian Army has adequate firepower, they may even be right. However, Von Manstein said that ‘one can never be too strong at the decisive point’ and artillery will be the decisive point of future conflicts. What we need is not ‘adequate’ firepower but overwhelming firepower both qualitatively and quantitatively. One silver lining is our Integrated Guided Missile Development Programme, which promises to increase our army’s Operational and Strategic hitting power.

However, it leaves units vulnerable in tactical situations where using missiles may be perceived as conflict escalation. What individual unit commanders need is organic artillery under their direct command that can alter the tactical situation in their favour by laying down large volumes of supressive, support and counter-battery fire at short notice. This is doubly important in Himalayan warfare, where the role of Close Air Support is truncated by appalling flying conditions of less than 200 days a year.

In conclusion we are presented with an Assertion and an Admonition. The Assertion being that India is more of a Continental than a Marine power and the Admonition that we start behaving like one.

is an MBA from the Indian Institute of Foreign Trade (IIFT) and an avid follower of Military History, especially its conjunction with Geopolitics.

9 thoughts on “India’s Dilemma : A Maritime or Continental Power?”