Prime Minister Modi’s ‘Make in India’ campaign has added a new dimension to defence production by making India the preferred designation for co-design development and production in India. The recent Obama-Modi talks reflected this new strategy where the foreign Original Equipment Manufacturers (OEMs) work in tandem with India’s defence industry partners. Aerospace being a predominant player to bolster military industry capability should take advantage of the new policy thrust. HAL must eschew its blinked approach and treat the private sector as collaborators rather than competitors.

India’s military industrial complex accounts for nearly $8 billion in terms of Value of Production (VOP) with wide ranging products from aircrafts, missiles, frigates, radars, earthmovers and super alloys. The aerospace sector contributes nearly 50 per cent of VOP of the defence PSUs with a value addition of around 30 per cent. However most of the output of Hindustan Aeronautics Limited (HAL) is based on licensed production. It is of late engaged in the co-design and development of a Fifth Generation Fighter Aircraft (FGFA) and a Multi-Role Transport Aircraft (MTA) with Russia.

The aerospace base in India is predominantly in Bangalore. However, there is inadequate synergy between the production, research and design agencies. The private sector is not looked upon as a valued partner but as an agency for outsourcing thereby frustrating Public Private Partnership (PPP) and ‘Make in India’ initiatives being flagged by the present government. The paper strongly argues that there is a need for the following imperatives:

The aerospace sector has been built up largely through Transfer of Technology and licensed production. The aircraft produced under license so far are given in Table 1. 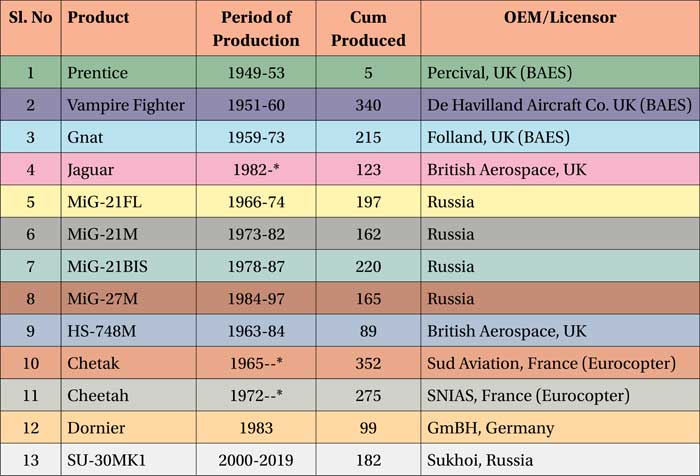 The financial performance of HAL over the years is as under:

Besides licensed production, HAL has significantly branched out into production of the Advanced Light Helicopter (ALH) Dhruv for the three services through a mix of imported technology and indigenous innovation. This is a major success story of HAL where it has demonstrated the capability to outcompete even foreign helicopter manufacturers such as Bell Helicopter and AugustaWestland in exporting ALHs to a number of countries including Ecuador, Bolivia and Nepal. The ALH can reach the snow-clad mountains of Kargil and ferry troops, materials and medicine.

It is presently engaged in a design, development and production contract with the Russians for a Fifth Generation Fighter Aircraft and a Multi Role Transport Aircraft. While these co-design development and production initiatives with Russia as a strategic partner is moving at a snail’s pace, all the same they need to be pursued with gusto instead of opting for outright imports.

There is a constant lament about HAL’s design and development capability. This is understandable because such capabilities are built over the years with significant R&D allocation as military superpowers like USA and Russia have demonstrated. HAL’s track record in this regard can be appreciated from the table given below:

It would thus be seen that in terms of Design to Built, software and design packages HAL consistently depends on TOT and outsourcing. However with joint design and development programs in the pipeline, our designers would get an opportunity to get exposed to world class design houses. It will help our designers to ramp up their skill-sets on a long term basis as this has been the experience of the Atomic Energy and Space Sector which have achieved significant success.

Our design capability is weak particularly in areas such as weapons, sensors and propulsions. In specific terms, the aeronautic sector has critical gaps in Single Crystal and Special Coating in Turbine Blades FADEC, Smart Aero Structures, Stealth Technology, Nano Material, Carbon Fibres, AESA Radar, RLG, INGPS, UAVs and Satellites. The DRDO’s track record in designing these critical sub-systems has been unedifying. The Transfer of Technology route has provided India with the ‘know-how’ without providing the clues for ‘know-why’. It is because of this reason, that even for an upgrade of the systems, defence PSUs are critically dependent on the original licensors.

New Contours for ‘Make In India’ In Aerospace Sector

The recent Aero India Airshow at Bangalore demonstrated the capabilities of diverse organisations in different countries. Bangalore has been the seat of aerospace research and development, design and production with organisations such as the ADA, HAL, GTRE and NAL functioning with unsatisfactory linkage.

While HAL as the production agency is expected to work in tandem with the DRDO and NAL, the synergy is inadequate. Each agency tries to lay the blame on the other for the inordinate delay in project execution. Cases in point are the Light Combat Aircraft and Kaveri engine programmes which are bedeviled by significant time and cost overruns.

Our design capability is weak particularly in areas such as weapons, censors and propulsions…

The Committee headed by Professor Rama Rao which has given far reaching recommendations for improving the functioning of the DRDO has strongly recommended that the design agency should be under the production agency so that proper accountability is ensured and the services get their deliverables in time. It is high time that in the interest of building an indigenous fighter aircraft with an indigenous engine, the GTRE be placed under the control of HAL and ADA and HAL work in tandem.

There is an urgent need to develop a Regional Transport Aircraft with seating capacity of 50 to 70 to ferry passengers between small cities. Brazil was prescient enough to build the Embraer aircraft with technological tie-up with the USA through offset arrangement and significant R&D ramp up and tax holding. A high powered committee was constituted to come up with a viable plan for design and development of a mid-segment commercial aircraft in India with private sector players and NAL as partners. The Committee had strongly recommended such a PPP arrangement where both the Ministry of Civil Aviation can operate with the Department of Defence Production/ HAL. Unfortunately, this extremely viable project for which many foreign companies such as United Aircraft, Russia and private sector players such as the Tatas were forthcoming, it could not be processed further because of lack of effective coordination between different agencies.

The present government displays greater decisiveness and a yen for timely delivery. The ‘Make in India’ Campaign, Skill India Policy and Land Acquisition Policy are reflective of our resolve to ramp up our manufacturing capability which has the potential to generate additional employment for a 100 million over the next decade. It is, therefore, strongly suggested that the Regional Transport aircraft initiatives are taken up as a major programme under the ‘Make in India’ strategy.

The other area where the Ministry of Defence can show greater pragmatism would be in the area of production of helicopters which are essentially for commercial use. Production of helicopters with military orientation and weaponisation can be placed under the purview of HAL. For commercial production, where the demand would be from the Defence Services, States and also for exports, there is a strong case for either Public Private Partnership with entities such as the Tatas or even outsourcing to the private sector.

Manufacture, repair and overhaul constitute a $50 billion global market. The market is presently dominated by North America and the present trend is likely to continue in future. There are four key factors for building a successful airframe MRO business namely, significant technical capability, robust talent pipeline, sustainable cost advantage and assured base load.

Globally, labour accounts for 70 per cent of cost of air frame and countries like India have substantial cost advantage in terms of labour rates. For instance, while in India, the man-hour cost in dollars is about $6 for a technician, in US it is $36. Similarly, in case of an engineer, the differential is 1:5 i.e. $12 per hour in India as against $60 in the USA. In the offset contract that India had concluded for MIG 29 upgrade, VVIP helicopters and the C-17 Globemaster aircraft, the offset benefits would be given by the company to HAL in terms of Maintenance, Repair and Overhaul. These have tremendous potential for Public Private Partnership. The old HAL airport, which is largely unused now, could be a major base for such PPP as well as foreign collaboration.

Prime Minister Modi’s ‘Make in India’ campaign has added a new dimension to defence production by making India the preferred designation for co-design development and production in India. The recent Obama-Modi talks reflected this new strategy where the foreign Original Equipment Manufacturers (OEMs) work in tandem with India’s defence industry partners. Aerospace being a predominant player to bolster military industry capability, should take advantage of the new policy thrust. HAL must eschew its blinked approach and treat the private sector as collaborators rather than competitors.

Private sector dynamism will spur the technology depth of defence PSUs such as HAL for achieving timely completion of deliverables as per agreed cost. This has indeed been a very sore point with the services who feel that their operational preparedness is hugely constrained because of a captive supplier like HAL. Further, dual technologies have immense potential. Even countries like Russia are trying to extend their global footprint by increasing their share in the civil aircraft segment. A mid-size commercial aircraft such as the RTA can be a potent elixir to kick start civil-defence synergy and foster viable PPP and international collaboration. It is time that the Aerospace Sector in India makes some significant value addition by abdicating the tag of simply being ‘an assembler’.