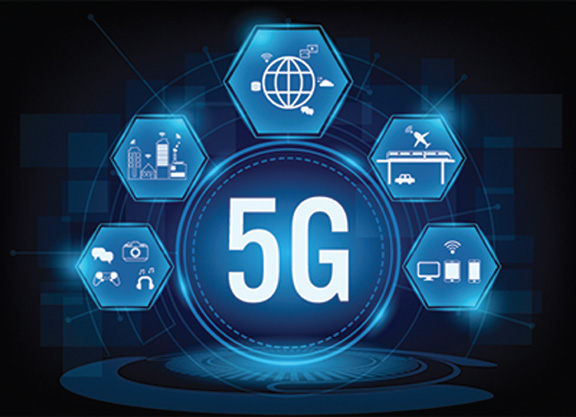 As the 5G networks begin taking shape world over, medical researchers are raising fears of health hazards from 5G. These include overall adverse effects on health and the DNA, leading to cancer, tissue deterioration and disruption of cell metabolism and the like. But then, medicos also warn of radiation effects because of prolonged use of cell phones, danger of proximity to mobile towers, even as 5G mobile towers are argued as doubly dangerous. But these are to be taken in the stride as we progress with information technology. Interestingly a study in Canada has concluded that we eat 52,000 plastic particles annually and if pollution levels are counted, 1,21,000 particles are consumed. Had they done the study in India, these figure would perhaps double – so much for our immunity.

Minister for Telecommunications and Information Technology, Ravi Shankar Prasad has stated that auction of 5G spectrum in India will be announced within this year, along with trials within 100 days. This is in keeping with development of 5G networks around the world. Presently, South Korea ranks number one with the fastest internet (65% faster than the US) and Japanese are already looking into 7G albeit their 5G network is being set up indigenously by mobile carrier Rakuten in collaboration with information technology firm NEC by installing some 16,000 low-cost fifth-generation base stations across the country over five years, which also keeps overseas expansion in sight. Significantly, Rakuten rejected bid by China’s Huawei to partner it for Japan’s 5G network.

Vietnam’s largest mobile carrier  Viettel has  completed trial of a 5G broadcast station in Hanoi with the speed of 600-700Mbps. Viettel has developed its own core technologies for 5G networks, including 5G chips and 5G devices. Vietnam’s MobiFone, also licensed for 5G network trial, has adopted South Korea’s Samsung’s technologies.  Vinaphone, another major telecom firm has entered into partnership with Japan’s Nokia to deploy its 5G network. None of these Vietnamese companies have used any equipment from Huawei.

The 5G auction in India is creating plenty excitement, even as the Director General of Cellular Operators Association of India (COAI) has stated that the planned base price of the 5G in India is too high and will be a “serious impediment” in development of the new network. The Telecom Regulatory Authority of India (TRAI) has recommended auction of about 8,644 MHz of telecom frequencies, including those for 5G services, at an estimated total base price of Rs 4.9 lakh crore, but telecom companies say they can’t afford the price tag.

Vodafone India, Bharti Airtel Ltd and Reliance Industries Ltd’s Jio, all members of COAI, are expected to participate in the auction. The question is which other firms will be allowed to participate in the auction? China’s Huawei Technologies are already pressing India to take a decision to allow them participation, its Chief Executive Jay Chen has told media that Huawei has been engaging India’s Department of Telecommunications (DoT) past 17 months, and adds, “Policy, standard procedure will provide security benefits for the industry and India”.

Japan developing a fully indigenous system Vietnam developing a 80% indigenous 5G networks with balance in collaboration with Samsung and Nokia raises the question where does India stand in this sphere? Reliance has reportedly tied up with Samsung but what is the government’s thought process for providing 5G network pan India, where it is planned to be launched within this year? Where are we in terms of indigenously developing core 5G technologies, 5G chips and 5G devices like Viettel of Vietnam and MIMO antennas like the Japanese? Or, are we looking at bulk foreign content, with Indian collaboration largely in terms of financial investments?

India rightly did not join the China-Pakistan Economic Corridor (CPEC) because it blatantly violated Indian Territory. But India is fully entangled in China’s “Digital BRI” with billions of Chinese products having backdoors flooding India, including those produced in China having embedded vulnerabilities at the manufacture stage. Currently there are reports of Chinese drones being used around the world sending regular inputs back to Beijing. India has done little to develop indigenous chips and operating systems. During the UPA II regime, the National Security Council Secretariat (NSCS) had issued a warning against use of Huawei and ZTE products for very valid reasons. However, within three months, the Ministry of Home Affairs under Sushil Kumar Shinde opened the floodgates to these companies. Obviously, there were no scruples in sacrificing national security on the altar of financial gains of the polity-bureaucrats-corporate.

It is universally acknowledged that Chinese investments abroad benefit China much more than the host country; China’s cumulative gains being in the strategic, geopolitical and financial spheres. We are going for boosting our information technology sector by introducing 5G network which is about 20 times or more or faster than 4G, which will help drive our economy. Giving control of the same to Chinese will be a strategic blunder. Whatsapp groups are flooded with news of Russia and UAE having signed 5G contracts with Huawei Technologies, which may be aimed at perception building. But Russia and UAE are not in China’s strategic crosshairs, India is.

COAI is protesting against the base price of 5G auction, as any and all companies in business would like to bargain. But for China it would be small investment compared to the returns it will get in strategic terms. Forget Huawei, India should not permit participation of any Chinese companies in the planned 5G network. The BJP government has come with thumping majority and though there is slew of 100-day announcements, there need not be a tearing hurry to usher 5G without examining every angle. A fully indigenous developed 5G network should be the aim even if it is some years away. Those participating in the trails should also not be allowed to partner Chinese companies. Instead, partnering companies in countries like South Korea, Japan and Vietnam should be preferred, where required.

For the new government it would be good if ministers and ministries shoulder responsibilities towards the public bit more than NDA II. For example, we are eager to introduce 5G network at the earliest but the existing mobile cover in say Delhi-NCR is in pathetic state. Most of the times mobiles don’t connect or people have to come out of the houses to talk. This has happened because a whole lot of illegal mobile towers have been removed. Whether those who made money from illegal towers were punished or not matters little to the public. What matters is that the mobile cover stands disrupted permanently disrupted. Government’s one-liner that service providers must pay for not connecting calls is of little solace to public, who can do little beyond changing service provider with similar results. Can the Ministry of Telecommunications and Information Technology, and DoT ensure ‘effective’ mobile cover in the country, including Delhi-NCR?