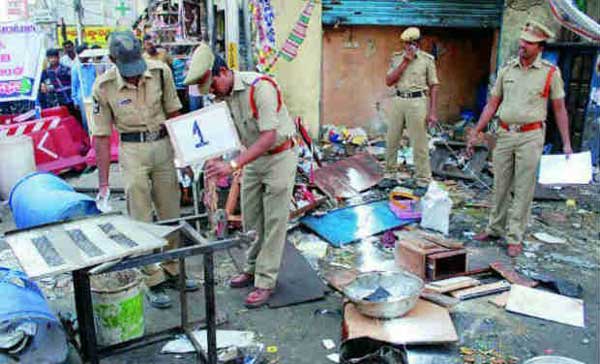 Kolkatta is the capital of the Indian state of West Bengal. Historically, Kolkatta has been the prime impetus of the freedom movement and the cultural renaissance of India. People who sacrificed and suffered most physically and mentally for liberation of India were from West Bengal. They did not necessarily belong to a political party. In fact the non-violent struggle of the Congress for freedom would have been baseless and without context if the aggressive struggle of the Bengalis had not preceded. Without demur they let the Congress’s passive philosophy eclipse them. The motherland was their only motivation. A visit to the cellular jail in Port Blair, Andaman & Nicobar Islands is testimony to the sacrifice of the people the state. About 80 percent of the names that the jail walls bear were from West Bengal and overwhelmingly from Kolkatta.

West Bengal has been brutalized by both these imported and alien ideologies i.e. communism and jihad. Consequently, the nationalist constituency in the state has also been brutalized and subjugated.

It is a tragic commentary that in same Kolkatta, in brazen deference to the jihadi groups and the ISI, a seminar on ‘Kashmir and Balochistan’ was not allowed.

Post-independence, for nearly four decades now, nationalism made a wild oscillations towards anti-nationalism in West Bengal. There was a very powerful segment of Communists in Kolkatta, who during the 1962 war were preparing for the welcome of Chinese. Later a Communist Chief Minister when asked about the unbridled demographic assault from Bangladesh to India had commented that he does not distinguish between the ‘proletariat’ of India and Bangladesh. This Chief Minister was essentially guided by the internationalist Communist ideology, which is foreign to India. Somewhere down the line, the demographic assault in India from Bangladesh acquired jihadi overtones. To be precise, it began in the beginning of 80s following the commencement of war in Afghanistan between Communist Soviet Union and Jihadis. The narrative of this grand finale of the Cold War was ‘Islam versus Communism’.

It is no coincidence that during this period both Pakistan and Bangladesh had rulers who provided huge rather irrevocable impetus to Jihad. Pakistan was taken over by Zia-ul-Haq and Bangladesh subsequently by Zia-ur-Rahman and Hussain Muhammad Ershad. It is also no coincidence that these three characters in the two countries belonged to the Army and had tenures running nearly parallel, i.e. Zia-ul-Haq (1978-88), Zia-ur-Rahman (1977-1981), Ershad (1982-1990). This significantly was the period of the war in Afghanistan. Also significantly both Zia-ul-Haq and Zia-ur-Rahman died under most mysterious circumstances. Dislodging regimes by manipulating assassinations was very much be practiced during the Cold War.

The jihad that we witness impacting from India and Bangladesh began in that period. It was an alien ideology to India. West Bengal has been brutalized by both these imported and alien ideologies i.e. communism and jihad. Consequently, the nationalist constituency in the state has also been brutalized and subjugated. The current dispensation in the state had achieved the feat of dislodging the three decade long Communist rule, which many considered impossible, but it was not without the indulgence of both ultra-leftist (Maoists) and the jihadis of West Bengal and Bangladesh.

…it is only in West Bengal that the jihadi organizations and Pakistan’s ISI could threaten the state government and ensure that no seminar espousing the cause of Baluchistan or emotional integration of the Kashmir Valley of India is ever held.

It was therefore not at all surprising that a seminar on ‘Kashmir and Baluchistan’ slated in Kolkatta few days back could not be held. Amongst the participants were reputed Kashmir hands: Maj Gen (Retired) GD Bakshi, Lt Gen (Retired) Ata Hasnain, Sushil Pandit and Baluchistan expert Tarek Fateh. The tactic adopted to derail the said event was novel, in that it was officially denied that there was any hindrance, but the organizers were warned against it in no uncertain terms. First, it was indirectly conveyed that Kashmir could not be discussed, accordingly to save embarrassment to guests ‘ Kashmir’ was dropped as title. Later, it was conveyed that Balochistan too cannot be discussed and least of all by Tarek Fateh.

The Baluchistan issue has acquired unprecedented momentum nationally and internationally after Prime Minister Modi declared his renewed support from the ramparts of the Red Fort. The jihadis do not consider the Balochis as true Muslims. They also feel that the Baluchistan issue has a dampening effect on the jihadi discourse in Kashmir. While the Baluch issue is being extensively debated all over India and on television channels, it is only in West Bengal that the jihadi organizations and Pakistan’s ISI could threaten the state government and ensure that no seminar espousing the cause of Baluchistan or emotional integration of the Kashmir Valley of India is ever held. As far as Tarek Fateh is concerned, his interpretation of Islamic history has hardly been disputed. What has hurt the jihadis is that his interpretation, an Indian interpretation, insists on centripetal rather than centrifugal forces, meaning which that an Indian Muslim is different from an Arab Muslim or an Afghani Muslim in terms of DNA and culture. His DNA is Indian. DNA is scientific truth. There is however no place for scientific truth in today’s West Bengal.

This is not the first time that Kashmir has reverberated in West Bengal. It may be remembered that recently when the Kashmir separatism had joined hands with the Maoists in JNU, the Jadavpur University in West Bengal, erupted in unison. In fact, there was a sort of competition between the two, as to who can be more virulent in abusing India and the nationalist forces. This again is not incidental. A source has confided with this author that one of the Pakistan Embassy Official Mudassir Cheema, who was expelled from India in 2016 for spying activities, in an informal gathering in Karachi had declared his plans to bring Kashmir separatism to Delhi and other parts of the country by conflating it with Maoism. This Pakistani Official was for some time not aware of the presence of this Indian source.

Much of the jihadi industry in West Bengal and Bangladesh thrives on liberal doses of funding from Islamic countries in West Asia, particularly the Wahabis.

The jihadi slogans in Jadavpur University, calling for separation of Kashmir and splintering of India cannot happen without an indulgent political dispensation. What JNU and Jadavpur underscored was the pan-Indian or rather the sub-continental nature of jihad. For the benefactors and the people wedded to this ideology, the Indo-Pak and Indo-Bangladesh border is incidental. It is the political funding, vote-banks and muscle power-banks that make the politicians beholden to the jihadi organizations.

It is now well documented that most of the jihadi organizations like Jammat-ul-Mujahideen Bangladesh (JMB) have relocated into West Bengal after crackdown by the Sheikh Hasina government in Bangladesh. The JMB, which has links with Al-Qaeda as well as ISIS, is now thriving under the current dispensation in the state. Sheikh Hasina may have hanged several Jammat-e-Islami (JeI) leaders for their war crimes during the liberation struggle of Bangladesh, but they have found bigger patron in the dispensation of West Bengal. In March 2013, the JeI held a massive rally and decried India for the liberation of Bangladesh. Pro-Pakistan slogans were raised during the rally. During the 2014 Lok Sabha elections, JeI had openly come out in support of the ruling party in the state.

The JeI in Bangladesh is touted as an economy within economy. It runs banks, insurance companies, shopping malls, and other profitable institutes within the country. Allegedly with the crack-down in Bangladesh, the dispensation in West Bengal has been clearly a major beneficiary. In fact, the relationship developed before the elections. In run-up to the Assembly Elections in 2011, the JMB, having its citadel in North-West Bangladesh provided the muscle power. The JMB, which had to contend with the leftists in North-West Bangladesh had strategic reasons for the partnership. As pay back the current dispensation provided bases to the jihadi organizations.

Much of the jihadi industry in West Bengal and Bangladesh thrives on liberal doses of funding from Islamic countries in West Asia, particularly the Wahabis. Also part of the jihadi economy was the huge fake currency network of which West Bengal was a part. It was in the border areas of West Bengal that fake currency was brought from Pakistan and sold to highest bidder. The rates varied from Rs.20,000 genuine currency for Rs.1,00,000 of fake currency to Rs.40,000 : Rs.1,00,000. This coupled with cattle smuggling was a bonanza for political funding in the state. It was for this reason that political leaders in West Bengal were behaving like zombies when demonetization struck them.

It is ironical that the governance agenda of the leader of a foreign state is contributing in no small measure to the security of India, but a federal leader of an Indian State is hell-bent on neutralizing all the gains.

If jihadi terrorism were to be mapped, it would clearly occur that in the entire terror network West Bengal and Bangladesh are the key. While jihadis are identified, indoctrinated and recruited from the north, south, east and west of India, their movement to Pakistan on fake passports is from West Bengal to Bangladesh to Dubai / Saudi Arabia to Pakistan’s Punjab, and finally to training camps in POK. The journey back is also through the same route. On arrival back in Bangladesh, the jihadis are provided RDX and weapons like AK-47s. Insinuations therefore about imagined Hindu terrorists procuring RDX from Kashmir for Malegaon blasts in 2006 and 2008, as also Samjhauta Express is the poor brainchild of one of India’s biggest English speaking crook who rose to become the Home Minister.

For the jihadi network, the territory of Bangladesh is critical as 4,096 km long boundary with India impacts on five states, i.e. Assam (262 km), Tripura (856 km), Mizoram (180 km), Meghalaya (443), and Bengal (2,217 km). In this long Indo-Bangladesh border, West Bengal has an overwhelming share, nevertheless it is this segment of the border that has played havoc with India’s security.

For the moment, one extenuating factor is that Bangladesh and West Bengal regimes are not in consonance with regard to the jihadi agenda. If ever ‘consonance’ becomes a reality, the consequences will be pernicious for India. It is ironical that the governance agenda of the leader of a foreign state is contributing in no small measure to the security of India, but a federal leader of an Indian State is hell-bent on neutralizing all the gains.

This classic example questions the ability of the present nature of Indian democracy and federal setup in meeting security challenges if the federal unit gets subverted and becomes inimical to India. With one new party funded by the ISI is aspiring to rule another border state Punjab. If it becomes a reality, the number of ISI and jihadi backed dispensations in border states would have gone up to three. Hence, the cancellation of seminar on ’Kashmir and Balochistan’ in Kolkatta is no small development. It stares at the very integrity of India.

7 thoughts on “Indians against India”