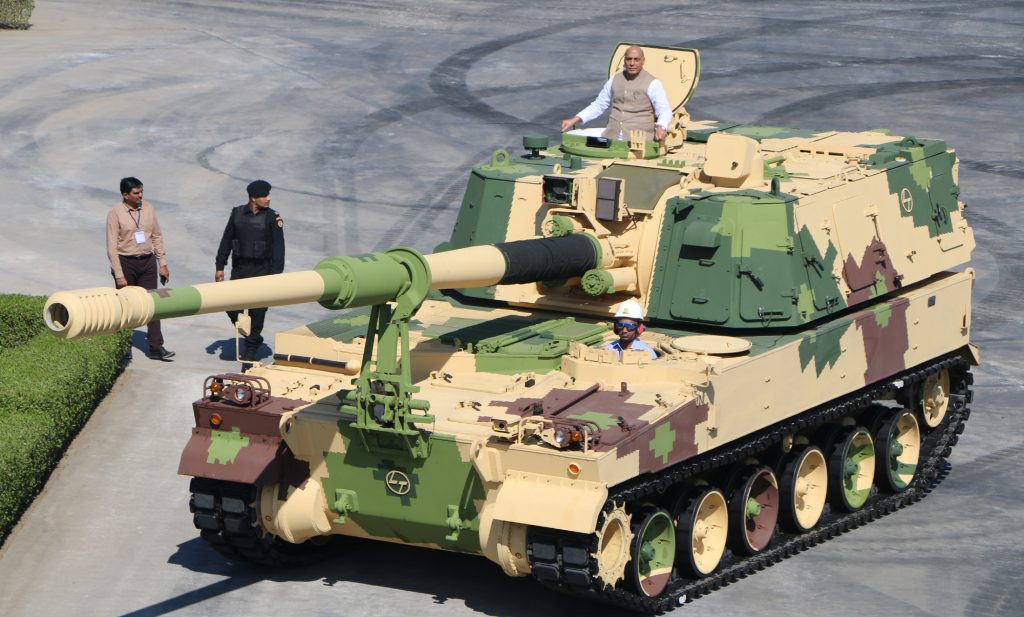 •  Another initial success related to the procurement of 145 M777, 39-calibre 155mm Howitzers from M/s BAE Systems, USA under the Foreign Military Sales (FMS) route. A huge contract valued at Rs 5,070 crore is a glorious chapter for the Indian private sector giant Mahindra Defence. Some highlights:

—  Way back in February 2016, BAE Systems, upon careful analysis of the technical prowess of Mahindra Defence, selected the private sector player to establish an in-country Assembly Integration and Test (AIT) facility for M777.[17]

—  With AIT operational on our land, out of 145 howitzers contracted, only 25 were scheduled to come fully assembled from the BAE, rest of the 120 Howitzers were to be progressively built by Mahindra Defence in India.[18]

—  AIT also meant a facility for life-time support of a foreign made weapon in India. What a reassuring fact!

•  Another initial success relates to a Public-Private Partnership (PPP) Project for the Advanced Towed Artillery Gun System or ATAGS for short. At Rs 3,364.78 crore for 150 guns, ATAGS has the distinction of being the biggest completely indigenous PPP Project. Also, the prototype ATAGS from Bharat Forge holds the world record for achieving the longest range of 48.074 km.

The uniqueness of ATAGS is that not only one but three private sector giants have joined hands in producing the gun. Bharat Forge along with OFB is making the gun barrel, Mahindra Defence is manufacturing the recoil system while TATA Power Strategic Equipment Division (SED) along with Punj Loyd, is producing the muzzle brake and some other components. It is indeed a positive development for the private sector wherein the Government in a kind of policy reversal, has decided that that the country’s first home-made 155mm towed gun ATAGS will be built jointly by public and private sector players.[19]

•  Open sources reported in March 2019 that TATA Power SED has bagged a Rs 1,200 crore contract for supplying 23 systems of Three-Dimensional (3D) ship-borne air surveillance radars. While this is a radar which has been built by a Spanish company Sistemas Defence, it is TATA power SED that is the Prime contractor with the foreign OEM providing product support.[20]

Slowly but surely, a network of Indian private sector players are finding themselves worthy, by way of business experience, domain expertise and financial clout…

•  Indian Defence and Aerospace Company (IDAC) the flagship company of Adani Defence and Aerospace is already into a number of niche sectors such as systems and avionics for aerial platforms, carbon composites, aero-structures and assembly for Unmanned Aerial Systems (UAS), transmission and gearboxes for rotary-wing platforms. IDAC is poised for integration of larger platforms such as fighter and transport aircraft, helicopters, UAS, as well as transporter-erector-launcher platform for missile system.[21]

From coal mining to highways to gas retail, and on to defence and aerospace, this private sector player is focusing on ToT from global players for critical platforms and technologies, helping out the growth of MSMEs and building capabilities for strengthening the indigenous muscle.[22]

This list can go on and on, establishing one fact over and over again that the private sector ‘has the capability and the potential’. Not that it has no unresolved issues. It has many of them with the MoD, with the Government and with the old public sector mindset that refuses to change. With all the initial successes and amidst buoyant sentiment, a new meaning of the Make-in-India has emerged in recent times – the one that goes to strengthen the defence manufacturing ecosystem by cutting through the red-tape and inertia of yesteryears. It roughly unfolds like this:

•  Slowly but surely, a network of Indian private sector players are finding themselves worthy, by way of business experience, domain expertise and financial clout, to measure up as ‘suitable global partners’ and trustworthy members of the global supply chain.

•  Such players, as stated above, are taking bold steps to forge international partnerships with world’s best OEMs by first putting Indian money and capability on the table and then asking them to join in for a win-win. With the aura of a market as huge as India, the foreign OEMs are all too willing, in fact queuing up!

•  Winning bids amidst fierce global competition and taking upon them to supply major platforms in niche technology domains to the defence forces all on their own clout and confidence.

•  Taking on the role of becoming centres of excellence in the global supply chains by undertaking design, development, manufacture and export of big ticket/small ticket items on the global format.

By default, the big projects in the hand of leading front-runner giants also bring many opportunities to small businesses to keep the wheels rolling. The results of the above can be gauged in the pattern of growth of funds of the private sector vis-à-vis public sector in the recent past. Here is a sample:

•  Out of the total domestic annual sales turnover of the defence industry amounting to some Rs 80,502 crore in FY 2018-2019, the share of private sector has jumped to Rs 16,000 crore, (20 percent) recording a positive year-on-year increase of over four percent.

Still a Long Way To Go…

All that has been said above must not lead to a conclusion that the private sector has arrived fully. In fact, the overall picture is far from perfect and there are miles to go. Some details:

•  Just as a mirror image of the rosy picture of the faster growth in the revenue and a bigger total share of 20 percent in the pie of defence annual sales, the fact remains that as much as 73 percent of the share still belongs to DPSUs and OFs and a mere seven percent is attributed to other PSUs/JVs. So where are the bulk of orders? This requires no answer.

•  According to an open source report quoting a market expert, the reality on ground is that still there is large pipeline of procedures, approvals and multiple layers of processing before an order ultimately reaches a private sector order book. The stark fact is there are ‘hardly any orders on the table’.

If Prime Minister Narendra Modi’s dream of Rs 35,000 crore in defence exports in the next five years is to be realised, then the combined might of the public and private sector will have to pull together. For this to be optimal, the huge untapped potential of the private sector must be exploited to the hilt. That the MoD is at it, is the hope of the author.

[2] “Private sector in defence production, “at www.indiandefencereview .com.Accessed on 11 Apr 2020.

[12] “No more red tape , private sector may soon lend a cutting edge to India’s weapon capability,” at www.economivtimes.indiatimes.com.Accessed on 13 Apr 2020.

One thought on “Indian Defence Private Sector: Some Initial Successes Yet Miles To Go”