Lockheed Martin delivered the first of six C-130Js to the Indian Air Force. The new fleet was ordered under a $1.2 billion U.S. Foreign Military Sale (India’s first) in late 2008. 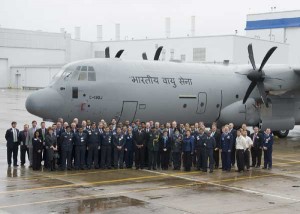 “There are few mottos that impart such passion as that of the Indian Air Force, which is ‘Touch the Sky With Glory’,” said Lorraine Martin, Lockheed Martin’s vice president for C-130 Programs, during today’s ceremony. “Today begins a new glorious, enduring partnership with India as the fourth largest air force in the world proudly joins the worldwide C-130 family.”

This is India’s first experience with the C-130 so the package being provided by the U.S. government is comprehensive. The contact includes six aircraft, training of aircrew and maintenance technicians, spares, ground support and test equipment, servicing carts, forklifts, loading vehicles, cargo pallets and a team of technical specialists who will be based in India during a three year initial support period. Also included in the package is India-unique operational equipment designed to increase Special Operations capabilities. The first two C-130Js will be flown to India early next year and will be followed by the remaining four aircraft deliveries in 2011. India’s new airlift fleet will be based at Hindon Air Force Station.

The C-130J is ideally suited to India’s mission environment, which often involves operating out of austere, high-elevation airstrips in hot conditions. The C-130J is powered by four Rolls Royce AE2100 engines and Dowty six bladed props which provide the aircraft with a great deal of power. The C-130J has been operated for the past several years in the mountainous areas of Afghanistan in conditions similar to India and performed exceptionally well.