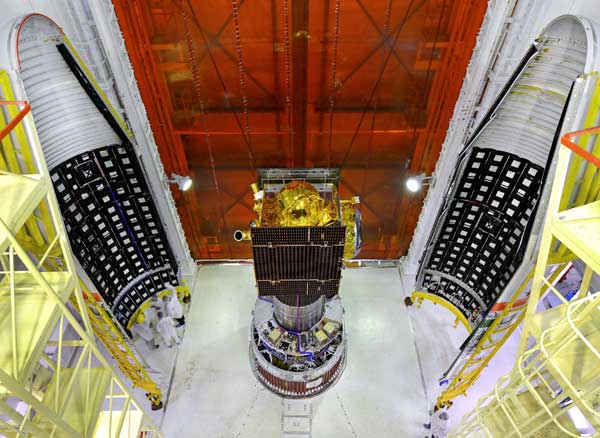 The ‘XL’ configuration of PSLV is used for the thirteenth time. Besides launching six IRNSS satellites, PSLV-XL has also launched many other spacecraft including India’s Mars Orbiter spacecraft, the multi-wavelength observatory ASTROSAT, Radar Imaging satellite RISAT-1 and the Communication satellite GSAT-12. This apart, PSLV-XL has successfully placed five satellites from United Kingdom into orbit in a single commercial mission.

This is the thirty-fourth consecutively successful mission of PSLV, repeatedly proving its reliability and versatility.

The President, Pranab Mukherjee has congratulated the Indian Space Research Organization (ISRO) on the successful launch of PSLV-C33 carrying IRNSS-1G, India’s seventh and final in the series of navigation satellites of the Indian Regional Navigation Satellite System (IRNSS).

In a message to Shri A.S. Kiran Kumar, Chairman of ISRO, the President has said, “I extend my hearty congratulations to you and your entire team at the Indian Space Research Organisation (ISRO) on the successful launch of PSLV-C33 carrying IRNSS-1G, the seventh and final in the series of navigation satellites of the Indian Regional Navigation Satellite System (IRNSS).

The launch of PSLV-C33 is an important landmark in our space programme with India now joining the small group of nations having their own regional satellite navigation system. It demonstrates, yet again, India’s growing capabilities in space launch technology. The nation is proud of this achievement.