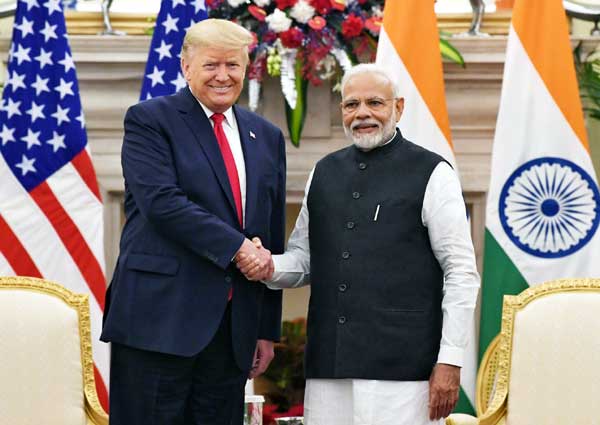 The United States and India, both major space powers, have long worked together on civil space efforts but have not done much with regards to security-space-cooperation. According to Victoria Samson, Washington Office Director, Secure World Foundation, “This is a real missed opportunity, as each country has a lot to offer the other in terms of shoring up their national security and the stability of the space domain overall. Space has been a force multiplier for the United States for decades and is now considered to be a war-fighting domain. India has not yet adopted that terminology, but is shifting its space efforts to include those with more military goals and objectives, and is increasingly giving more authority for space programmes to its Defence Research and Development Organisation (DRDO).”

One way in which for the two to cooperate is through space situational awareness (SSA) agreement. “As of April 2019, Strategic Command (STRATCOM) had signed 100 SSA sharing agreements with 20 countries, two intergovernmental organizations, and 78 commercial owner/operators, but India is not one of those countries. Signing an agreement with India should be made a priority by STRATCOM leadership, particularly given that India is laying the groundwork for its own SSA network and also because of India’s growing prominence in launching multiple satellites at one time,” Samson said. According to her, space should become a regular part of the bilateral discussions between the US and India on security issues. There have been three space security dialogues, which is a good start, but space should also be incorporated in larger strategic and 2+2 discussions.

“Finally, it is so crucial for both the development and evolution of India’s space programme and for the US-India relationship in space that the Indian government formalise a national space policy and/or strategy, as that will expedite strategic partnership in space between the two countries,” concludes Samson.

U.S. Secretary of State Michael R. Pompeo and Secretary of Defense Mark T. Esper welcomed India’s Minister of Defence Rajnath Singh and Minister of External Affairs Dr. S. Jaishankar to Washington D.C. for the second annual U.S.-India 2+2 Ministerial Dialogue.  The four Ministers positively appraised the growing partnership between the US and India, grounded in mutual trust and friendship, democratic values, people-to-people ties, and a common commitment to the prosperity of their citizens.  The Ministers noted that the deepening strategic partnership between the US and India is rooted in shared values of freedom, justice, human rights, and commitment to the rule of law.  They resolved to work together in the 2+2 framework as a whole-of-government effort to realize the full potential of the U.S.-India strategic global partnership, guided by the shared vision of President Trump and Prime Minister Modi.  They intend to maintain regular communication on emerging developments through the newly established secure communication lines between the Foreign and Defense Ministers of the two countries.

The top US companies including Boeing and Raytheon are in talks with the Indian Space Research Organisation (ISRO). Says SurendraAhuja, Managing Director, Boeing Defence India (BDI), “We are proud of India’s recent strides in space exploration and ambitions towards human space flights by end of 2021. It is a testimony to the country’s innovation, determination and full embrace of the challenges of space. Notwithstanding our six decades of space experience, Boeing is inspired by what India has achieved and it’s aspirations for the future. The US looks forward to partnering with ISRO in their endeavours.

The GPS-aided GEO augmented navigation (GAGAN) is an implementation of a regional satellite-based augmentation system (SBAS) by the Government of India. It is a system to improve the accuracy of a GNSS receiver by providing reference signals.GAGAN-TDS will help in civil navigation through use of the space-based augmentation system. The GAGAN, which has been endorsed by the International Civil Aviation Organization is expected to augmenting the standard positioning signals from GPS satellites. As part of the agreement between Raytheon and ISRO, the US Company is going to develop the hardware and software for the ground-based elements of GAGAN.

Celebrating the 50th anniversary of the Apollo 11 mission and the ISRO), the Ministers recognized space cooperation, including on Earth science and lunar exploration, as a unique facet of the U.S.-India partnership.  They applauded the close collaboration between their space agencies to launch the jointly developed NASA-ISRO Synthetic Aperture Radar (NISAR) satellite in 2022.

The Ministers welcomed growing cooperation through the biennial U.S.-India Civil Space Joint Working Group that spans cutting-edge Earth observation capabilities to interplanetary exploration and supported new opportunities for collaboration, including in the areas of human space flight and exploration.  The Ministers also welcomed the sharing of bilateral Space Situational Awareness information, which will catalyze efforts to create the conditions for a safe, stable, and sustainable space environment.  Both sides expressed intent to discuss areas of potential space defense cooperation in the next year.

The country will send up an unusually large number of 10 earth observation (EO) satellites during 2020-21, according to the latest annual report of the Indian Space Research Organisation for 2019-20. On a quick look, such a preponderance of the EO launches is unprecedented and includes new categories such as the first Geo Imaging Satellite, GISAT-1.In comparison, only three communication satellites — which is another major category in space infrastructure — and two navigation satellites are planned for the coming financial year starting April.

The annual plan mentions 36 missions, another high for a year, these includes both satellites and their launchers. The high number also stands out amidst the immediate two years before and after the plan. For the ongoing fiscal, ISRO had proposed launching six EO satellites, of which two are due to go. For 2021-22, the plan is to add eight EO satellites.