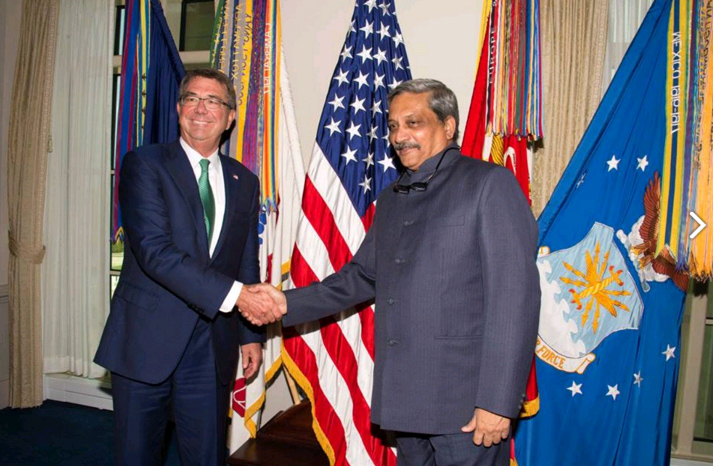 Defence Minister Manohar Parrikar and US Secretary of Defense Dr Ashton Carter at Pentagon on August 29, 2016.

“At the invitation of U.S. Secretary of Defense Ashton Carter, Minister of Defence of India Manohar Parrikar made his second official visit to the United States from August 29-31, 2016. In addition to his official meetings at the Pentagon and joint visit to the 9/11 Memorial with Secretary Carter, Minister Parrikar also met with the leadership of the Defense Innovation Unit Experimental (DIUx) and visited U.S. Cyber Command (CYBERCOM). He will also visit the Defense Advanced Research Projects Agency (DARPA), and Joint Base Langley-Eustis for a tour of the Air Combat Command (ACC) and the 480th Intelligence, Surveillance, and Reconnaissance (ISR) Wing. In addition, he will interact with representatives of U.S. defense industry during the visit.

The defense relationship between India and the United States is based on the two countries’ shared values and interests, and their abiding commitment to global peace and security. During their meeting, Minister Parrikar and Secretary Carter discussed the wealth of progress in bilateral cooperation and the deepening strategic partnership between the United States and India. The visit – their sixth interaction to date – demonstrates the importance both sides place on strengthening defense ties across many areas: from increased strategic and regional cooperation, to deepened military-to-military exchanges, to expanded collaboration on defense technology and innovation.

Minister Parrikar and Secretary Carter discussed India’s “Major Defense Partner” designation, announced during Prime Minister Narendra Modi’s visit to Washington in June 2016. They agreed on the importance this framework will provide to facilitate innovative and advanced opportunities in defense technology and trade cooperation. To this end, the United States has agreed to elevate defense trade and technology sharing with India to a level commensurate with its closest allies and partners.

Minister Parrikar and Secretary Carter welcomed continued progress under the Defense Technology and Trade Initiative (DTTI). They welcomed the decision at the DTTI meeting in Delhi in July 2016 to broaden its agenda by setting up five new Joint Working Groups on: Naval Systems; Air Systems, Intelligence, Surveillance and Reconnaissance; Chemical and Biological Protection; and Other Systems. They also noted the signing of an Information Exchange Annex under the framework of the Aircraft Carrier Joint Working Group. Minister Parrikar and Secretary Carter also agreed to continue to their close consultation on “Make in India” proposals.

Minister Parrikar and Secretary Carter praised the discussions at the inaugural Maritime Security Dialogue held in May 2016. They welcomed the conclusion of the bilateral ‘White Shipping’ technical arrangement for data sharing on commercial shipping traffic. They also discussed cooperation on capabilities to augment India’s capacity for Maritime Domain Awareness (MDA). Acknowledging India’s positive contributions to regional security and stability, including in matters beyond the maritime space, Minister Parrikar and Secretary Carter announced their agreement to further consultations in this area, including through the next Maritime Security Dialogue, which will be held later this year. They noted recent high level official exchanges including the visit to New Delhi of General John Nicholson for consultations on Afghanistan, as well as by the Secretary of the U.S. Navy and the Secretary of the U.S. Air Force earlier this month.

Minister Parrikar and Secretary Carter welcomed the continued efforts by both countries’ militaries to deepen bilateral cooperation and expand opportunities for greater collaboration. They commended the recent completion of the naval exercise MALABAR with Japan and India’s participation in the Rim-of-the-Pacific (RIMPAC) Exercise in Hawaii, as well as the Red Flag Air Force Exercise in Alaska. They were encouraged by the increased complexity in the YUDH ABHYAS Army exercise, which is scheduled for September in India. They agreed to facilitate greater and regular interactions to deepen mutual understanding between military services and promote practical cooperation in areas of mutual interest, such as counter-terrorism, maritime security, special operations, humanitarian assistance and disaster relief. They also welcomed the signing of the bilateral Logistics Exchange Memorandum of Agreement (LEMOA), which will facilitate additional opportunities for practical engagement and exchange.

Secretary Carter reiterated his appreciation for the support provided by Minister Parrikar and the Government of India that facilitated the recovery and repatriation of U.S. World War II remains in April 2016. Minister Parrikar reinforced his commitment to this important mission and he and Secretary Carter were pleased that the U.S. Defense POW/MIA Accounting Agency (DPAA) would return to India November 1-December 14, 2016 to survey additional aircraft crash locations.”