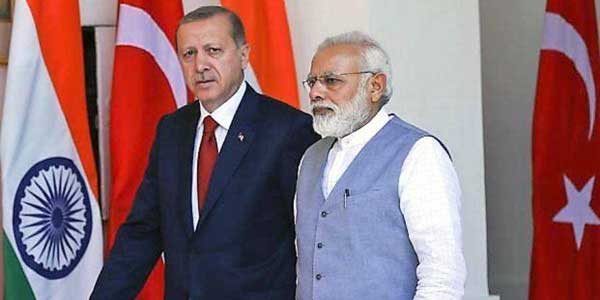 Turkish President Recep Tayyip Erdogan has more than demonstrated he wants to re-establish the erstwhile Ottoman Caliphate and install himself as the Caliph. Erdogan’s anti-India stance and open support to Pakistan has been demonstrated. Indian intelligence agencies appear waking up to the surreptitious inroads Turkey has made in India aimed at spreading radicalization and terror activities. Media reports have revealed that the Turkish Embassy in New Delhi has forged alliances with Indian NGOs and activists who serve Ankara’s agenda and are increasingly being sent to Turkey on exposure trips and encouraged to speak against India.

Significantly, some of the fronts for the Turkish government and outfits that supports anti-India activities are directly linked to Erdogan and his family and have made deeper inroads in India. Much of this effort is directed through Turkish state media, educational institutes and the nonprofit sector, or NGOs. Media has quoted intelligence officials in saying, “Turkey has been providing lucrative scholarships and running exchange programs for Indian Kashmiri and Muslim students to study in Turkey through state-sponsored NGOs. Once the students land in Turkey, they are approached and taken over by the Pakistan proxies operating there.”

Erdogan is using all avenues to spread his ideology. Bollywood actor Amir Khan presently shooting a movie in Turkey went and met first lady Emine Erdogan; some say it was arranged by the Congress office in Turkey, others feel could be Indian Embassy to break the ice? Film actors like politicians are public personas and their presence, utterances, opinions, influence large number of people in the society.

Turkey has sided with Pakistan in all wars against India. Erdogan is going all out to bring South Asian Muslims in his fold to also challenge Saudi Arabia’s dominance in the Sunni-Islamic world although he has turned a blind eye to the plight of Uighur Muslims in Xinjiang.

Turkey supports Pakistan’s membership of the Nuclear Suppliers Group. Erdogan has been going out of his way to raise the Kashmir issue at international forums including at the United Nations General Assembly (UNGA). While speaking at Pakistan’s National Assembly during his visit to Pakistan in February 2020 Erdogan compared the struggle of Kashmiris with the Ottoman Empire’s fight during World War I.

The Turkish foreign ministry on August 5 criticized India’s decision to revoke Jammu and Kashmir’s special status in August 2019, asserting that it did not contribute to peace and stability in the region, and also called for dialogue between India and Pakistan. The statement was synchronized with Imran Khan’s histrionics and China’s effort to raise the Kashmir issue at the United Nations.

The ironic part is that while Erdogan was talking anti-India in Pakistan’s National Assembly in February 2020, India signed a $2.3 billion (Rs 15,000 crore) deal in the same month (February 2020) with Turkey to jointly manufacture five 45,000 ton Fleet Support Vessels (FSVs). These FSVs are to be built at Hindustan Shipyard Limited (HSL) with assistance of Turkey’s TAIS Shipyards; a consortium of Turkish companies Anadolu Shipyard (ADiK) the lead developer, Istanbul Shipyard, Sedef Shipyard and Selah Shipyard. Construction of the first FSV is to begin in end 2020 with delivery to the Indian Navy in 2024, with remaining four FSVs to be delivered at 10-month intervals.

The Indian FSV project was initially approved by the Ministry of Defence (MoD) in 2016 after the Navy projected a requirement for ships that could carry fuel and other supplies for warships at sea. In the bidding for the project held during 2019, Turkey emerged the lowest bidder. According to media the decision was hanging fire till finally cleared by the Vigilance Department of MoD gave the green signal to it this year and the Ministry of External Affairs (MEA) had no objection to it.

Notably Turkish shipyards are major supplier of warships to Pakistani Navy. In July 2018 Pakistan Navy signed a contract for the acquisition of four MILGEM-class Fleet Support Ships from Turkey which is the largest single military export deal of Turkey worth $1.5 billion. Turkey specifically designed a custom-made FSV for Pakistan. Besides supplying four new corvettes, Turkey supports Pakistan’s submarine fleet and has signed a deal to sell 30 x T-129 attack helicopters that have been developed in collaboration with Italian company Finmeccanica (now Leonardo).

In September 2019, Erdogan had raised the Kashmir issue during the launch ceremony of new corvettes for the Pakistani Navy. Over the last decade, nearly 1,500 Pakistani military officers have received training in Turkey. Both countries are collaborating in drone production and likely to join forces for developing and co-producing a fighter jet. Turkish military attaches from each branch of its armed forces have been posted in the Pakistani embassy in Ankara. Turkey helped upgrade a batch of F-16 fighter jets for Pakistan Air Force. In November 2019, navies of both countries participated in drills in the Mediterranean and Arabian Sea.

Turkey’s nefarious inroads into India definitely have not emerged overnight. So how was the joint FSV project with Turkey cleared? Is this a case of left hand not knowing what the right hand is doing or is there something more sinister? MEA may have given the go ahead hoping good relations with Turkey, which itself appears utopian and therefore flawed though MoD appears to have sought MEA clearance to cover themselves. But what about intelligence inputs of Turkish activities against India? Was clearance taken from the National Security Advisor who is the repository of all intelligence?

Given the revelations of Erdogan’s design on India and Turkish activities in our country, how prudent is it to let Turkish officials and workers in HSL for months-years? What about national security?

We need to seriously examine the link between the businesses of lowest bidder (L1) and national security. Despite its grossly anti-India stance, China has had a virtual free run in our sectors under L1, not to talk of Beijing’s political and economic coercion. We have only woken up after China’s aggression in Eastern Ladakh.

Turkey does not share land borders with us otherwise it too would have possibly mobilized troops in support of Pakistan and China. But Turkey’s activities indicate it is using asymmetric approaches against us in addition to intimate military cooperation with Pakistan. How then can we be lackadaisical in going or a joint naval project?

With Prime Minister Narendra Modi’s emphasis on ‘Atmanirbhar Bharat’, no doubt these FSV’s must be part of ‘Make in India’. But do they have to be made in HSL with Turkish assistance with the attendant dangers to national security? There is always the red tape that any change means the whole process of procurement must start from the beginning which means the Navy getting these FSVs will be put back by that many more years. But considering the above developments, why can’t the L2 bid be chosen or alternatively HSL be allowed to pick up another partner in case there is a abhorrence to the project going to private sector?

As for Erdogan’s radicalization and terror related activities in India, action must be taken against concerned organizations and NGOs in India and concerned Turkish organizations banned. Motive of Congress office in Turkey is dubious enough but visitors to Turkey must be screened-monitored and scholarships by Turkish institutions banned. Issue of an advisory on the subject is warranted. Sitting on the fence will be naïve.