Home  >  News  > Geopolitics  >  India is not Bharat: A Note to Chinese Strategic Thinkers!

India is not Bharat: A Note to Chinese Strategic Thinkers! 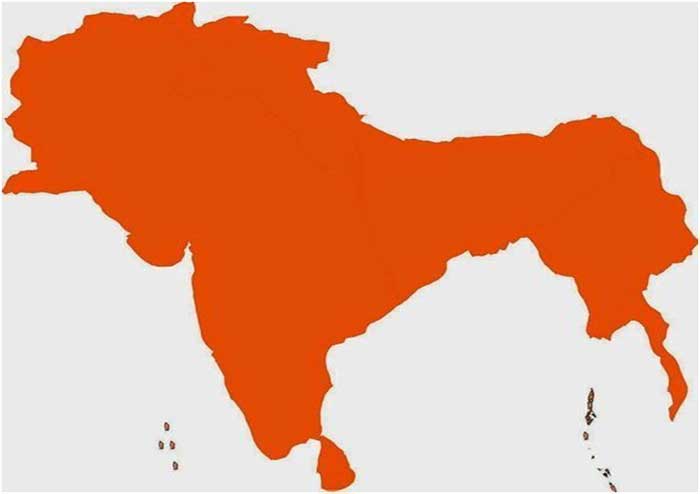 Of all the strategic variables – intention, capability, objective, strategy, tactics, doctrines, domestic and foreign policy, leadership etc – it is geography that remains a constant – hence the challenges arising thereof are structural in nature. Despite investing heavily on its naval arm, China was, is, and always will be a continental power cursed by its geography. Considering the history of warfare in the 20th century, it is a fact that despite having a robust naval fleet, sailing crew and other elements of naval power, the triumph of a continental power at sea is nil for the belligerent land neighbor’s it has – for example Germany.

It was perhaps this strategic logic that inspired the Chinese leadership to first resolve its border disputes left over from history with 12 of its 14 land neighbours (baring India and Bhutan) prior to its naval expansion. Furthermore, the categories of ‘maritime’ and ‘continental’ power is an oxymoron given that a maritime power is most threatened from sea and hence defends itself at sea (Britain, Japan), and likewise, a continental power at land (Soviet Union, China).

During the late 19th century a young strategist – librarian of the Summer Palace (Beijing) – at the Qing court was tasked with a white paper to understand the security implications of western naval powers at China’s door step in the Pacific theater. The white paper concluded that, China was least threatened by western naval powers in Hong Kong, Macao, Qingdao etc. However, it cited Calcutta and Madras as an existential threat and recommended a continental strategy to dislocate western naval powers from British India.

Without a naval base in South Asia, Western naval fleet was ineffective in projecting power along China’s Eastern coastline. While this study remained a theory under Qing dynasty, it was operationalized by Japan during the Second World War – Southern Expansion Doctrine(Nanshin-ron). Despite being a naval power, Japan adopted a continental strategy by first gaining foothold on the Eurasian continent via land and then defending herself against the western fleet through land based aviation. Japanese occupation of Singapore (1942) and its attempted invasion of India (1944) through Burma is a case in point. This military strategy was defined in terms of geography and finally led to Japan’s surrender following the use of nuclear weapons for lack of better military means.

Amidst the recent Sino-Indian border stand-off, the US naval exercises that included the rare presence of 03 Carrier Strike Group (CSG)[1] and a coincidental pre-planned naval exercise by China in the Pacific (July 1-5) theoretically establishes a – two front war – scenario and conclude a Indo-US quasi-military alliance as near permanent for China. Much of the developments in this regard can be categorized as a – mission based strategic communication, and the lessons learned during this time will form the building block for potential conflict in the future.

According to Chinese foreign ministry on July 6, “….the United States had deliberately sent its ships to the South China Sea to flex its muscles and accused Washington of trying to drive a wedge between the countries in the region”. Chinese sources have flagged the close proximity at which the US forces have been conducting close-in aerial reconnaissance missions along Guangdong Province and naval patrolling near northern Taiwan (153 Km/82 Nm) and off the coast of Zhejiang province[2]. On July 8, Chinese President Xi was reported to have had a tele-conversation with Russian President Putin.

To meet this challenge, China has initiated two land-based solutions – (1) China- Myanmar Energy Corridor (CMEC; 2017), and (2) China- Pakistan Economic Corridor (CPEC; 2015) – which provide China with a shorter land route to the Indian Ocean. This approach overlooks the modern geo-political context from a historical perspective and self-activates a contradiction in China’s strategic thought which perhaps China is unaware of and cause for strategic discomfort with India in recent times.

India that is Bharat (Article 1; Constitution of India) is a double entendre. While the term India is an appellation on part of foreigners for reference, the term Bharat (Island of Jambudveep) is a geographical concept defined in terms of territory that lies in-between the foothills of Himalaya and the three oceans (Jaswant Singh (1999), Defending India).  Evolution of Indian political culture in the 21st century has activated this concept and refers to it as Akhand Bharat(Undivided India) which lay dormant for decades. The concept of Akhand Bharat includes sovereigns such as Pakistan and Myanmar within a singular territorial paradigmalong with Sri Lanka, Bangladesh, Nepal, Bhutan, Tibet, and Afghanistan.

According to Prime Minister Modi (2012), “….does not mean we wage war on any country … without war, through popular consent, it can happen … We call this Sanskritik Bharat (Cultural Bharat)” – peaceful reunification with Indian characteristics.

China’s continental solution to its maritime challenges violates the idea of Akhand Bharat. However, it lacks intentionality given that this concept is still a mental phenomenon, albeit having strategic consequences. On June 3, the Supreme Court of India forwarded a plea as representationto the government of India to change India’s name exclusively to Bharat despite acknowledging that, “India is already called ‘Bharat’ in the Constitution of India”.

[2]Global Network (环球网), “飞机刚走军舰又来！美军驱逐舰被曝现身东海，距离中国海岸只有153公里” [The plane just left. The ship’s coming again! The US destroyer has been revealed to be just 153km off the coast of China in the East China Sea] 10 July, 2020.

3 thoughts on “India is not Bharat: A Note to Chinese Strategic Thinkers!”