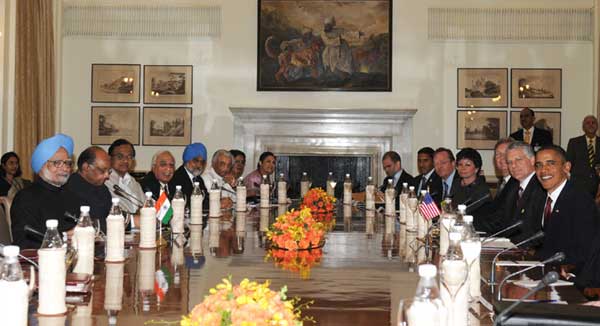 The Prime Minister, Dr. Manmohan Singh at the delegation level talks with the US President, Mr. Barack Obama

I am going to (deal with) the subject of “India in Asian Geopolitics” because I want to spend some time focussing on some structural features of the security environment that faces India across the widest possible canvas. I must give you two warnings, however, before I launch into the substance of my presentation. First, I am not going to speak as an American citizen, but merely as an analyst of international politics. I do this because I want to escape the question of my own political commitments in order to better reflect on what I think is a serious problem that confronts both the United States and India together.

Secondly, I want to make what is fundamentally an academic presentation because it is the best means by which to draw out some important policy consequences.  I emphatically do not want to make a conventional “policy” presentation, because that risks proffering essentially a mask that covers my own personal opinions and prejudices. I will end this presentation, certainly, by giving you a flavour of my prejudices. But I will keep that for the end. For the body of my lecture, I want to focus on the substance of what I think is the central challenge of geopolitics today.

The international political system is likely to stay, quite durably, a unipolar system for a long time to come: that is, for at least another twenty or so years,

I will divide my presentation into four parts:

Let me start by briefly saying a few words about the current geopolitical environment in Asia. If you look at the literature on the prospect of geopolitical changes, you will find that it is rife with all manner of predictions about the onset of multipolarity-that somehow the current international system is going to become multipolar shortly and that the world as we know it today will before long evolve into a new universe of multiple poles.

My own view is that this argument is profoundly mistaken. The international political system is likely to stay, quite durably, a unipolar system for a long time to come: that is, for at least another twenty or so years, if the statisticians are to be believed. But this reality is going to manifest itself in a world where the centre of gravity is shifting from where it has traditionally been for the last 500 years-Europe-to Asia. Asia will produce close to half, if not half, of the world’s economic product by 2025-this is the real emergent change in international politics-but, despite this fact-and this is the element of continuity-the United States will remain the dominant power in the international system for the foreseeable future.

There are four virtuously interacting reasons that assure the continuing pre-eminence of the United States.

The dollar still remains the most important global reserve currency and because, at the end of the day, the rest of the world, no matter what its complaints are about the United States, sees the United States as a very desirable destination to park its resources.

The first reason is that, despite all the skepticism on this score, the United States has demonstrated a capacity to maintain continuing high rates of capital accumulation through a mixture of internal and, more importantly, external resources. The United States is in the very lucky position where the rest of the world is eager to provide it with the financial resources that enable it to sustain its profligate way of life. This is because the dollar still remains the most important global reserve currency and because, at the end of the day, the rest of the world, no matter what its complaints are about the United States, sees the United States as a very desirable destination to park its resources. Furthermore, America’s most important trading partners seem embarked on externally-driven growth strategies, which make Washington an even greater beneficiary of their desire to invest in the United States. So even though the United States does relatively poorly in terms of internal capital accumulation, it manages to compensate for these deficits through disproportionate access to the resources of others.

There is a second reason which enables the United States to stay at the peak of the international system, and that is its continued ability to sustain labour force growth. For those who have survived the fundamentals of neo-classical economics, you will recognise that I am referring to “capital plus labour,” which is the magic formula for producing growth. If the United States can continue to import capital from abroad and can continue to maintain the growth of its labour force, if necessary through the immigration of high-value labour at very low political cost, it will have succeeded in meeting the minimal requirements for sustained economic growth. The United States has many advantages here, which few others do. It must be remembered that this is a country of immigrants; it is not threatened by immigrants; it welcomes immigrants and continues to welcome immigrants; all of which essentially implies that the United States can tap into the two great reservoirs that continue to assure its productivity and its pre-eminence.

The third reason is that the United States continues to maintain a very highly effective national innovation system. It maintains this innovation system primarily because it relies on a market economy to make efficient allocation decisions. Further, its large pool of skilled and innovative labour continues to generate numerous inventions and a steady stream of innovation. Equally importantly, the large American private sector and the government contribute very large investments in science and technology and research and development, and the country enjoys a very flexible and highly effective venture capitalist system.

And so between a political structure that essentially permits decisions to be made smartly, a private-public partnership that invests heavily in research and development and science and technology, and a venture capitalist system that produces investible resources to sustain a steady stream of technical change, the United States has an innovation system that clearly is second to none anywhere in the world.

The final element is US military capabilities, which are unparalleled and growing. Anyone who has followed the debates in Europe about America’s military capability relative to the capacity of our NATO allies, recognises the fact that the gap in technical sophistication between the United States and Europe is actually widening in terms of conventional precision strike capabilities and the ability to deploy sustainable power projection at long-range. Now, this does not mean that the United States can use its military forces indiscriminately or without blowback. It simply means that the United States has incredible advantages with respect to projecting power and, with it, come greater degrees of political autonomy. Perhaps, the most remarkable element is that the United States maintains these capabilities through a defence budget that is larger than the defence budgets of at least the next fifteen countries in the international system put together, and yet these defence burdens are only about 3% of US GNP.

This is a country of immigrants; it is not threatened by immigrants; it welcomes immigrants and continues to welcome immigrants; all of which essentially implies that the United States can tap into the two great reservoirs that continue to assure its productivity and its pre-eminence.

All these four elements working together – capital accumulation, labour force growth, innovation and military capacity – essentially ensure that in a structural sense, the United States will continue to dominate the international system in the policy-relevant future. This implies that there is no imminent threat to American power, since the most important economic powers in the system are essentially friends or allies of the United States: Japan and South Korea in Asia, and all the NATO/EU countries in Europe.

Despite this being the case, however, there is no way to avoid the other half of the story: the prospect of new rising powers in the international system, which will continue to remain a matter of concern to the United States. It is in this context that the rise of Asia poses special opportunities and special challenges. It offers special opportunities because it allows the United States to grow and profit from Asian prosperity. But it offers specific challenges as well insofar as it harbours the prospect that certain key Asian states, which continue to grow over a long period of time, could one day become challengers of the United States in the global system. There are four candidates for this role: Russia, Japan, China and India. When you separate the wheat from the chaff, however, it all boils down to just two countries, China and India. The following are the reasons why:

2 thoughts on “India in Asian Geopolitics”