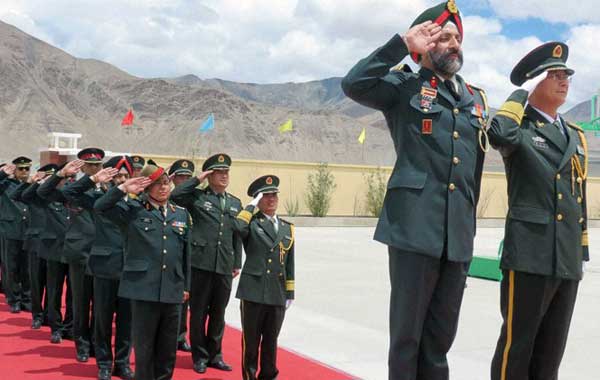 After a swift victory, Julius Caesar is said to have bragged in the Roman Senate: “Vini, Vidi, Vici” (I came, I saw, I conquered). These historic words need to be adapted for the recent intrusion of the Chinese Peoples’ Liberation Army (PLA) in Ladakh: “they came, they saw, they built a tower, but they did not come.”

Jiang added that this type of information always come from “a certain group of people, including the military, who are hostile towards China.”… Conclusion: the Indian side must have been victim of a high-altitude mirage.

It is at least what Hong Lei, Ministry of Foreign Affairs’ spokesman affirmed in Beijing: “As far as I know, there is no such ‘face-off’ between China and India in the border area.”

And of course, he added, China is committed to maintaining peace and tranquility on the border area.

Let us look at the facts from this side of the Line of Actual Control (LAC).

As it happened before the visit of Premier Li Keqiang to India in April/May 2013 and also when President Xi Jinping arrived in Ahmedabad in September 2014, on September 11, the Chinese People’s Liberation Army (PLA) intruded on India’s territory.

The next day, it was reported in the Indian press that a face-off had occurred in Burtse area, a few miles east of Daulat Beg Oldie (DBO), where the 2013 confrontation had occurred.

According to The Times of India, “the bone of contention is a surveillance structure being erected by the PLA very close to the LAC.”

The Indo-Tibetan Border Police apparently objected to the construction of the structure and, with the help of the Army, stopped the PLA.

Subsequently, the PLA called for reinforcements, followed by a massing of more Indian forces in the area.

On September 12, The Times of India said:

“The two forces are still locked in an eyeball-to-eyeball confrontation and efforts are being made to defuse the situation.”

Just a day before the stand-off in Ladakh (which never was, according to the Chinese!), a senior member of the Chinese Central Military Commission (CMC) visited the region. A coincidence, you may think? Or a mirage?

“This is not the first time that Indian media has reported ‘confrontations’ that do not exist in the Sino-Indian border area. These news are often untrue, negative, misleading and aimed at provoking public opinion, and are harmful to the relationship between China and India.”

Such media accusations are unreasonable, as Chinese troops have never intruded, he said. In other words, the PLA did not come, nor did they see anything, nor did they erect a tower.

Jiang added that this type of information always come from “a certain group of people, including the military, who are hostile towards China.”

Conclusion: the Indian side must have been victim of a high-altitude mirage.

Not only were the local Indian troops fooled by the visual phenomena (they quickly rushed reinforcements), but the Unmanned Aerial Vehicles (UAVs) and other Long-Range Reconnaissance and Observation System, mistakenly saw the PLA troops entering Indian territory near Burtse, erecting a tower and later massing troops.

A more serious aspect has however not been mentioned in the Indian press.

Just a day before the stand-off in Ladakh (which never was, according to the Chinese!), a senior member of the Chinese Central Military Commission (CMC) visited the region.

A coincidence, you may think?

On September 9 and 10, a member of the all-powerful CMC visited Ngari Prefecture, which borders Ladakh, in Western Tibet. General Zhang Yang, Director of the PLA’s Political Department was in Tibet to ‘celebrate’ the 50th anniversary of the creation of the Tibetan Autonomous Region.

At the end of the grandiose function held in Lhasa, the ‘Central’ delegation split into different groups.

Yu asked the defence forces “to improve their abilities of governing Tibet according to law [sic], specifically cracking down on the separatist forces.” … Does it help to ‘safeguard border stability’ by crossing over to the neighbour’s side?

Yu Zhengsheng, chairman of the Chinese People’s Political Consultative Conference (CPPCC) and member of the Standing Committee of the Politburo, who headed the delegation, went to Shigatse and visited the Tashilhunpo, seat of the Panchen Lamas.

Vice-Premier Liu Yandong, also a member of the Politburo, headed towards Shannan (Lhoka) Prefecture, while Jampa Phuntsok, an old Tibet-hand ‘inspected’ Nagchu. Another ‘sub-delegation’ led by Du Qinglin, one of the CPPCC’s Vice-chairpersons went to Nyingchi, north of Arunachal Pradesh.

On September 7 in Lhasa, Yu Zhengsheng personally met the Army and the Armed Police; he urged them “to crack down on separatist forces and be ready to fight a protracted battle against the 14th Dalai [Lama] clique.”

Yu also asked the defence forces “to improve their abilities of governing Tibet according to law [sic], specifically cracking down on the separatist forces.”

The defence forces should uphold the correct ‘political direction’ and exert a larger role for safeguarding border stability and ethnic solidarity, he said.

Does it help to ‘safeguard border stability’ by crossing over to the neighbour’s side?

And this happened a day after General Zhang Yang spent 2 days in Ngari Prefecture. Officially, he came to convey the ‘loving care’ and the ‘deep feeling’ of the CPC Central Committee, the State Council, and the Military Commission to the ‘cadres and masses of all nationalities’, affirms the Chinese press.

Like his colleagues in other parts of Tibet, General Zhang brought along a banner carrying President Xi’s words, ‘Strengthen National Unity and Construct a Beautiful Tibet’. Interestingly, though Ngari depends upon Xinjiang Military District (MD), Zhang was accompanied by Lt Gen Xu Yong, commander of the Tibet MD and not Lt Gen Peng Yong, the Commander of Xinjiang MD.

…was the CMC’s member informed that the PLA was planning to build a structure in an area considered by India to be within her territory? Let us presume that Zhang was not informed, it means that the PLA has a serious problem of command. If he was informed, it is a serious issue for India (despite Beijing’s denial).

A day earlier, speaking at the grand function in Lhasa, Lt Gen. Xu Yong had asserted:

“During these 50 years in the same boat, the troops stationed in Tibet and police staff always depended on the Party to write [the history] of the bloody battles to defend Tibet.”

What ‘bloody battles’ does General Xu refer to? Battles in Ladakh during the 1962 conflict with India? We will probably never know.

Also in the delegation to Ngari, was Wang Yongjun of the Central Commission for Discipline Inspection (CCDI). A year ago, WantChinaTimes had reported that the CCDI’s boss, Wang Qishan had started ‘parachuting’ CCDI officials into key posts around China in order to strengthen the party’s anti-graft campaign and bring new blood to certain regions.

Wang’s presence may be an indication that heads could soon roll on this front too. Let us not forget that a ‘bloody’ battle against corruption, particularly in the PLA, is raging in the Middle Kingdom; more than 50 generals have already lost their jobs.

Apart from the customary photo sessions with the ‘cadres and the masses’, (i.e. herders, farmers, toilers, etc.), General Zhang Yang and his delegation “made a special trip to lay a wreath on the revolutionary martyrs’ cemetery,” said the Chinese press. Which martyrs? Of 1962 War again?

One line also mentions that Zhang ‘visited the troops’.

This raises an important question: was the CMC’s member informed that the PLA was planning to build a structure in an area considered by India to be within her territory?

Let us presume that Zhang was not informed, it means that the PLA has a serious problem of command. A free for all in the PLA?

If he was informed, it is a serious issue for India (despite Beijing’s denial).

By the way, why did a Division Commander (Maj Gen Joshi) need to participate in a flag meeting if nothing had happened?