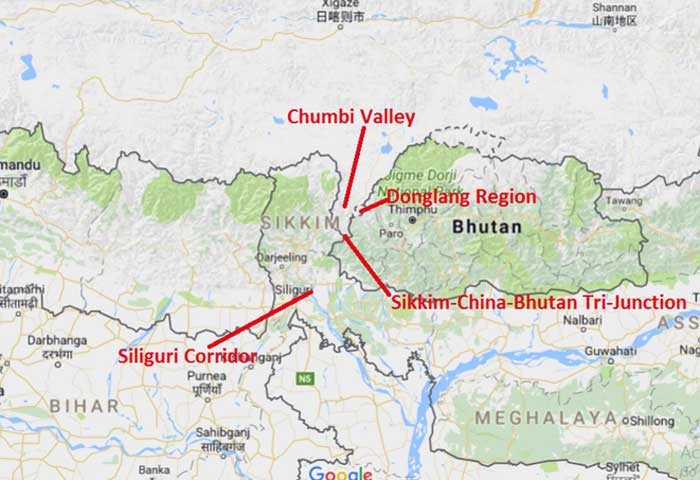 The current stand-off should be seen in Bhutan should be seen in the larger perspective of China’s strategy in the region based on the rules of its ancient game of ‘Wei Qi’ or Go – an ‘encirclement game’[1]. This game along with the Chinese concept of ‘Unrestricted Warfare’ aptly sums up their strategy and operational art. The game entails ‘multiple battles’ over a wide front, while concurrently ‘balancing the need to expand’ with the need to ‘build protective clusters’[2].

Accordingly, China seems to be pushing the envelope on multiple fronts in the South China Sea (9 Dash line claims), economic push in ASEAN, South Asia and Central Asia (BRI), and countering a ‘Rising India’. It is keen to develop its ‘protective clusters’ to its soft under-belly in these regions, even as it attempts to expand beyond the ‘first island chain’ to its west. As such, this stand-off in Bhutan seems to be orchestrated to show India as an undependable ally in the region, thereby pushing these smaller nations into its ‘protective cluster’ and facilitate in isolating India and the West.

However, India’s firm response and the Bhutan King’s resolute stance appear to have stalled China for the moment. While China may (mis)quote the 1890 Treaty between it and Britain, it knows it is on slippery ground, as it did not relate to the territory of Bhutan. Also, China or Tibet has no ‘historical claims on Bhutan. As per the rule of ‘Wei Qi’[3], China has no ‘liberties’ left in this region, considering the terrain and its own position. The only options are either War or a withdrawal.

China would look for some ‘face-saving’ position for itself and may not embroil itself in a war at this stage, while major restructuring of the PLA is underway. Seems more a case of multiple signalling that has not panned out the way China had visualised –India’s rebuff to the BRI, the G-20 Summit, and the Malabar Exercise in the Bay of Bengal. With USA in retrenchment, its withdrawal from the Paris Agreement on 01 Jun 2017[4], and the refusal by POTUS to reaffirm Article 5 of NATO, on 27 May 2017- the cornerstone of the NATO alliance, which decrees that “an attack against one ally is considered an attack against all[5], China seems to have surmised that the ‘shi’[6] was now flowing more towards it.

The continued Information Warfare hype appears a planned move to counter India’s hardliners and show the Indian Government in poor light. However, the firm stance of the Bhutan Royal family and its own tactically disadvantageous position has queered the pitch. While the discussions during the G-20 Summit could lead to a pull back, with some ‘face-saving’ device being conjured up by all sides, China would not give up this game so easily. As per the ‘Ko Rule’ of ‘Wei Qi’[7], China may not want to immediately repeat the action; however it may pose other threats to India in other domains to inhibit its steady economic rise. It would not have been lost on the Chinese that the Bhutanese Parliament and the political parties have not come out strongly against the Chinese during the on-going standoff.

Before China returns to the Doklam Plateau, it would need to now create a position of strength for itself; while it can do nothing about the physical terrain where it is at a disadvantage, it is the political ‘terrain’ within Bhutan that it could target.

The Chinese could look to neutralise the hold of the Royal Family, by pushing Bhutan towards more democracy – something that would be difficult for India to contest. At the same time, deepen its contacts within the political framework to gain strategic equity. It is then that they would revisit this sector for a political trade-off with the Bhutanese Parliament –revisiting the package deal of 1996 wherein they ‘offered’ to ‘give up’ claims to 495 sq km of land in the Pasamlung and Jakarlung valleys in Bhutan’s north-central sector of Bumthang in return for Bhutan to give up the 269 sq km in Doklam to China[8]. India, therefore, needs to ensure that the Bhutanese Parliament, their political parties and the Royal Family stay on the same page, with India on this issue.

Concurrently, China would likely make a push in other domains within the region to show India as an undependable ally – more to counter India’s rising stature, especially after India rebuffed the Belt and Road Forum, to be considered as an alternate pole within Asia. India needs to ensure it provides a mature and a calibrated response on multiple fronts, along with other like-minded middle powers in the region to thwart China’s game of ‘Wei Qi’ especially in the Asia Pacific region.

[5]Max de Haldevang, ‘Europe may no longer be able to rely on the US for defense against Russia. Here are its options’ Quartz 03 Jun 2017, https://qz.com/993926/merkel-wants-europe-to-start-fending-for-itself-without-the-us-heres-what-that-looks-like/

Retired after 37 years of distinguished service, as the ADGMO (B) in 2016,having been closely involved with Future Strategy, Force Structures and Force Modernisation.