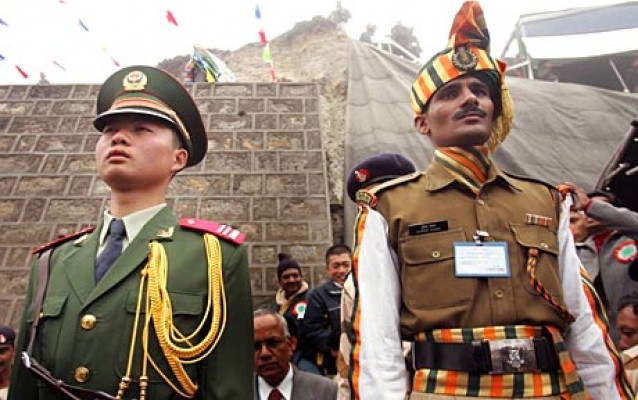 The continuing (since April 15,2013) Chinese troop intrusion ( about 20 troops) 10 kms into Indian territory near Burthe in the Daulat Beg Oldi (DBO) area of Eastern Ladakh in the western sector of the Sino-Indian border should be a matter for careful analysis and concern, but not alarm.

The Chinese aim seems to be to re-assert their claim of sovereignty over this area without disturbing peace and tranquillity.

A spokesman of the Chinese Foreign Office has denied any Chinese intrusion into Indian territory in this area. The Government of India, for the present, has been treating it as one of those intrusions which take place sometimes due to differing perceptions of the Line of Actual Control (LAC) in this area and trying to deal with it through the normal mechanism for handling such issues without disturbing peace and tranquillity across the border.

There is no evidence to show that this could be a prelude to a major Chinese assertion of territorial sovereignty in this area. The Chinese aim seems to be to re-assert their claim of sovereignty over this area without disturbing peace and tranquillity. The Chinese troops are presently camping in the area in a tent. We will have reasons to be more than concerned only if they stay put there and construct permanent defences as they often do in the uninhabited islands of the South China Sea.

Since last year, the Chinese have been a little more assertive of their sovereignty claims over the islands of the South and East China Seas. They have reportedly constructed permanent defensive and administrative structures on some of the islands over which they have disputes with Vietnam and the Philippines.

In the East China Sea, where they have sovereignty disputes with Japan, they have avoided any such construction, but stepped up seemingly aggressive air and naval patrols of the areas in the vicinity of these islands. The Chinese Navy has also stepped up its visits to the islands in the South China Sea claimed by Beijing.

We may have to revisit our peace and tranquillity strategy and think of a more activist policy to face the Chinese activism.

Till now we have seen greater Chinese activism in the enforcement of their sovereignty claims only in the South and East China seas, but not across the Sino-Indian border. If the Chinese troops stay put in the Burthe area and construct defensive structures in the area, that will be an indicator of their deciding to follow a similar policy of activism across the Sino-Indian border too. That should add to our border concerns. We may have to revisit our peace and tranquillity strategy and think of a more activist policy to face the Chinese activism.

In the Western sector of the border, which is largely unpopulated, the status quo favours the Chinese. Since 1962, they are already in occupation of whatever territory they have claimed. We have very few options to re-assert our sovereignty in any area of this sector which is under Chinese control.

In the Eastern sector (Arunachal Pradesh, which the Chinese call Southern Tibet), the area is populated and the status quo favours India. Even though our defensive and administrative infrastructure in the Arunachal Pradesh area is not comparable with the Chinese infrastructure in the Tibet Autonomous Region (TAR), we are in a much stronger position in the Eastern sector than in the Western.

While the Chinese continue to repeat from time to time their claims to the Arunachal Pradesh area, they have avoided in the Eastern sector the kind of ground activism that one comes across in the Western sector. There is a noticeable keenness on the part of both China and India to avoid any provocative incident either in the Eastern or Western sector.

The Chinese are unlikely to relent in their claims to Indian territory in the Eastern sector till after they have succeeded in imposing on the Tibetans a Dalai Lama chosen by the Communist Party of China (CPC) with the help of the Panchen Lama chosen by the CPC.

The older generation of Tibetans continues to abide by His Holiness’ exhortations for peaceful means of protest. The Chinese are worried that the GenNext of Tibetans represented by organisations such as the Tibetan Youth Congress (TYC) may take to violent means to resist the imposition of a Dalai Lama chosen by the CPC.

In their calculation, this may necessitate action by the PLA in the populated areas of Arunachal Pradesh. Till Tibet is pacified without fears of any further trouble and the Chinese have forced the Tibetans to accept their nominee as the Dalai Lama, Beijing would like to maintain its claim to Arunachal Pradesh to justify action by the PLA in that area to contain trouble, if need be.

They will, therefore, keep the Arunachal Pradesh issue alive till they have forced the Tibetans to accept their decision regarding succession of His Holiness. We should factor this into our border strategies relating to China.