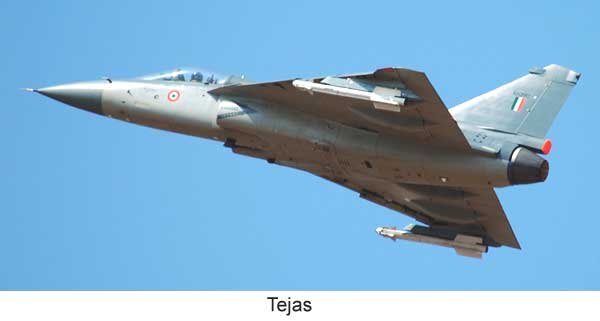 The Central Govt in India accords very high priority and funds allotment to cater for the equipment requirements of the Armed Forces. Yet the bulk of the major equipment requirements are neither indigenously developed nor produced under the present evolved methodologies and practices. This is quite a paradox as unlike the first three decades after Independence, there is quite a good industrial and technological base as well as a pool of excellent human resources available within the country. It would be appropriate to say that in the top echelons of the Govt, there has been a mismatch in the selection of the type of management techniques to be adopted to run such costly and important programmes in a dedicated and time-bound manner.

No General can add on stars by taking the risk of participation in such programmes, so the Service HQs confine their role to submitting of GSQRs of the required Weapon Systems and Platforms and carrying out of trials of the shortlisted samples which are procured after immense delay.

Our top bureaucrats are very good, our defence scientists and technologists are undoubtedly top notch, but there is an all pervasive atmosphere of lack of coordination, close monitoring, and acceptance of delays as routine, because the people who have to use these Systems are not adequately involved in the running of these complicated programmes.

The blame game can be summed up as follows – “No General can add on stars by taking the risk of participation in such programmes, so the Service HQs confine their role to submitting of GSQRs of the required Weapon Systems and Platforms and carrying out of trials of the shortlisted samples which are procured after immense delay.

The DRDO uses the projections of the Services to get vast fund allotments without running the risk of losing their perks and jobs if they fail to meet the project deadlines. It has no accountability and commitment towards the Armed Forces to get things done on time. The Defence Industry as represented by the Ordnance Factories Board, Defence PSUs, etc, under the protective umbrella of the Dept of Defence Production do not even commit 5 percent of the fund requirements for development of new products so they have no stake or involvement and are very happy to settle down for licensed production of soon to be obsolete foreign models.

The Govt of India as represented by the civilian bureaucracy retain the levers of decision-making and become indispensable to the political leadership because of their ‘negotiating skills’ regarding working out costly import deals and offsets.”

The end result is that the Armed Forces never get in time what they need as per their accepted priorities. And the country gets fleeced by foreign vendors and arm twisted by the Govts of the supplier nations, to meet their foreign policy interests. This is despite the earnest and proclaimed goal of the political  leadership to ensure the indigenous content of defence purchases to 70 percent by the year 2015. Therefore there exists the urgent need to bring in SAP type Programme Management Tools, and ensure that the noose of active involvement is around the necks of all the stakeholders or else the concerned senior Project or Coordination Managers will run the risk of automatically getting eased out of their cushy Defence Ministry jobs, and give way for more competent and maybe younger hands. 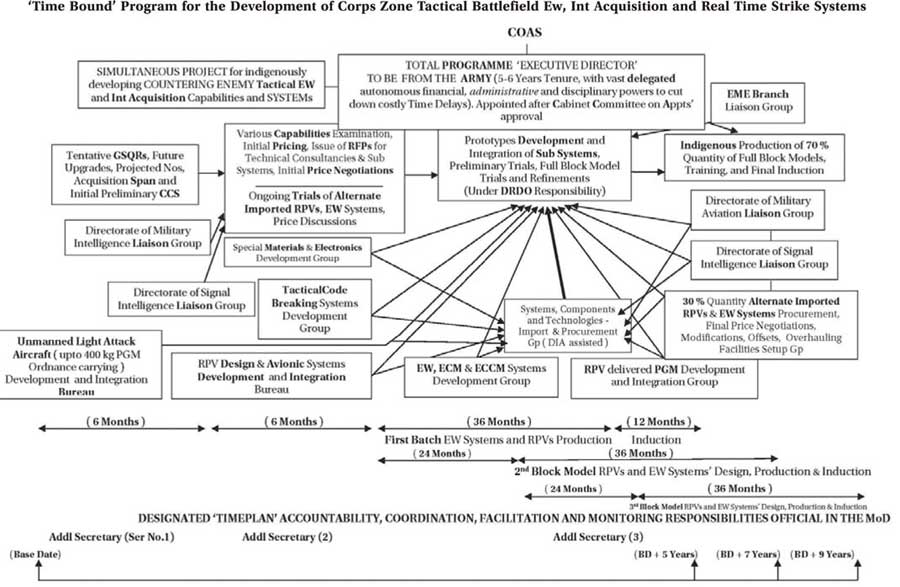 This article examines as to how a change can be brought about in the Indian Defence Ministry’s way of getting things done regarding major equipments’ indigenous development and induction Programmes.

The Need for a Central Executive Authority for Major Programmes

In all our Defence Programmes to date, save for the odd successful PROJECT SAMYUKTA or PROJECT BISON, there has never been a designated single ‘Chief Executive’ who is duly empowered to make the disparate agencies under the MoD function in a coordinated manner and if need be, even facilitate their removal. Such inefficiency concerning public money is hard to find in other democracies or even in Russia or China ! In the US for example, after the funding has been passed by the Congress, the programme expenditure and progress is closely monitored by a designated armed forces officer sitting in the Pentagon. In the same way in the UK, all new product development and procurement programmes is controlled through the Defence Equipment and Support Organization (DE&S) which is headed by a serving General rank officer who is well versed with the background functioning and nuances of teamwork in the MoD. He implements the country’s Defence Industrial Strategy having a budget of  15 billion pounds ($23.6 billion).

Today even Pakistan and Iran have functional RPVs indigenously developed and introduced in service. Whereas, we are either constantly carrying out trials of ‘to be imported ones’…

Today even Pakistan and Iran have functional RPVs indigenously developed and introduced in service. Whereas, we are either constantly carrying out trials of ‘to be imported ones’ or are unable to overcome the mismatch between different components and assemblies going into our home grown effort. The job must get done within the laid down time frame as if one’s life depends upon such an accomplishment. Otherwise  national reputation for technical prowess and managerial credibility are at stake. It may not matter if we do not win many medals at the Olympics, but in matters of statecraft, it is military strength alone which dictates whether we deserve a permanent seat in the UN Security Council.

Solving The Issues of Command and Control

In the Indian context it is but natural that everybody wants to avoid responsibility and accountability for solving hard and knotty problems. The ‘democratic’ response is to postpone decision making. But in the Defence set up, can such prevarications carry on for even a timeframe of more than two decades ? Have we still not put into practice the lessons learnt from the 1962 Chinese Debacle?

There are no problems that are insurmountable considering the amount of money we spend in our Defence Budget, and we therefore urgently need to conceptualize and put into effect the blueprint of the effective organization required in the Ministry of Defence which would overcome such inherent friction and inertia and get us the desired results.

At the outset it must be made very clear and laid down in the Defence Ministry’s Directive that anybody working full time on any of the Sub-Projects forming part of an indigenous development programme would come under the umbrella of this Programme for pay, promotion, ACRs, postings, and administrative and disciplinary control, irrespective of where he/she is located and working. Then, those working  part time  or  in  an associate capacity, should also face the same overriding encumbrances  less the question of  as to where they are drawing their  pay from, if they do not deliver their assigned tasks competently and on time. Acts of lack of willing cooperation or delays caused due to lack of taking a ‘burning’ interest and not  just adequate interest, must be put down with an iron hand.

Mistakes should be accepted as long as progress continues to be made. There has to be a system of incentives put in place for teams completing their parts ahead of schedule akin to the NHAI contracting system.

The senior IAS bureaucracy in the MoD, though not coming under the Programme, should have designated officers to facilitate and coordinate actions, and they should be held responsible for any time delays that are caused due to slippages or slackness in carrying out these functions which could in any way lead to derailment of the time plan. A six monthly review of important Defence Indigenous Programmes should be carried out by the Parliament’s Standing Committee on Defence. Most importantly, the appointment of the CEO of such Programmes should be cleared by the Appointments Committee of the Union Cabinet and not done merely as a departmental action within the ministry itself.

Understanding the Value of Public Money and National Prestige

The developed and powerful countries of the world have a heritage of intense national concentration of resources and methods in order to achieve what they want in a given timeframe.

This is a special quality reflecting on – national character and pride in self reliance, strong base in basic sciences built up over a period of time, investments in technological R&D, competitive spirit, and ultimately, sound Programme Management on the Govt’s part.

Every country has to evolve its own Project Management architecture, as what is good and successful for the Japanese will not necessarily work for India if copied blindly. For this to be realized, the crux of the issue is that the Sub Project Leaders should be dynamic people, capable of working with a missionary zeal. They should be provided with enough latitude and freedom of action to meet the quality criteria and time schedules for development of the necessary sub-systems without any excuses.

Our DRDO functions more as a canalizing agency for foreign firms to do transfer of technology deals for their previous generation models, than like an Original Equipment Maker…

Mistakes should be accepted as long as progress continues to be made. There has to be a system of incentives put in place for teams completing their parts ahead of schedule akin to the NHAI contracting system.

Considerable expenditure is saved to the Govt if ‘system of systems’ integration gets completed smoothly and ahead of time.

We have to create the competence and drive to meet any indigenous development targets in the Defence sector, inspite of all types and degrees of obstacles. The race towards greatness has to be won on our own prowess and not using borrowed feathers.

As of date we are headed to become a vassal State even surpassing Saudi Arabia as the world’s largest arms importer.

Our DRDO functions more as a canalizing agency for foreign firms to do transfer of technology deals for their previous generation models, than like an Original Equipment Maker which can sweep foreign markets with relevant technology products at lesser than Western or Eastern manufacturers’ costs.

We have to recover the costs of developing Defence Systems through timely exports in considerable volumes.